The continued uptrend in North America’s unconventional natural gas and oil supplies and global demand dynamics suggest that the outlook for pipeline and storage infrastructure development may not only be bullish but also long-term, according to analysts with Raymond James & Associates Inc. 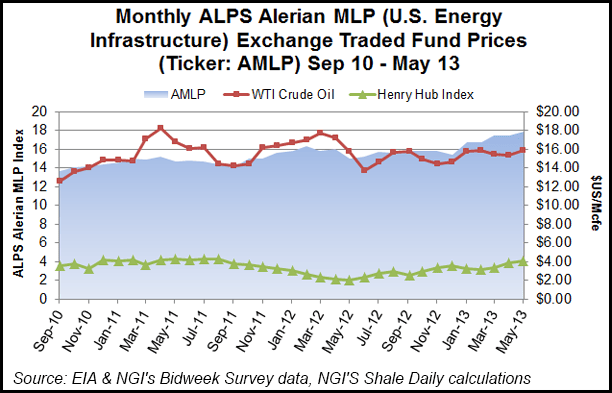 “Within the context of a low cost of capital environment and dollars chasing investment in ‘real’ assets, we reiterate our belief that $8-10 billion of incremental capital per year will need to be invested in additional infrastructure over the next decade to help balance the evolution of supply with nonlinear demand.”

The comments followed a recent master limited partnership (MLP) investor conference organized by the National Association of Publicly Traded Partnerships. Analysts said they remain bullish about the “fundamental, structural and financial drivers necessary for outperformance of the asset class over the long term” on a total return basis even though there is “continued discussion” about potential “headwinds” from structural/tax reform risks, commodity price risks and the impact of inflation to the cost of capital.

However, analysts said investors find energy MLPs compelling based on several factors. These include their value proposition versus alternatives on a risk-adjusted and total return basis; opportunity for low-risk growth; and exposure to energy equities without price/volume risk.

Seven MLP funds year-to-date have launched, versus a total of 14 in 2012, said the Raymond James analysts. Given that energy MLPs are trading at a “significant yield discount” to real estate investment trusts and other high-yield asset classes, “the trend of increasing institutional flows into MLPs should continue. Pairing this with the positive underlying fundamentals for MLPs, we believe the sector is well positioned to deliver substantial returns to its investors.”

Over the past two years several MLPs have begun working on converting some pipelines to oil from natural gas or repurposing them for the market, a trend expected to continue, said the analysts.

“Largely due to growing volumes in formerly active production regions (West/South Texas and Pennsylvania), coupled with shifting pipeline flows, many partnerships are discovering underutilized pipelines within their portfolios that can be converted or repurposed to reduce project costs and streamline the project timeline.”

“Two key dynamics support our conviction that MLPs are just starting to scratch the surface on these types of projects,” said Raymond James analysts. “First, with MLPs trading at the high end of the historic range and M&A [merger and acquisition] activity attracting high multiples (roughly 10 times for liquids-related assets), the fact remains that utilizing an existing pipeline can create a material advantage in terms of project cost. It can also shave precious time off large-scale projects, which is increasingly important given growing competition as plays begin to mature.

“Secondly, the infrastructure gap is starting to show up more heavily on the downstream side of the equation, creating more opportunities for midstream MLPs to redirect volumes from one market to another. Nowhere is this more apparent than the Gulf Coast, where refineries are struggling to keep up with growing condensate and light sweet volumes.”

MLP investors should expect more projects to see legacy pipelines converted and repurposed, said the analysts. More important, “the lower project multiple and faster project timeline for such projects should enhance cash flow for partnerships that have geographically well-positioned assets that are currently underutilized.”

Last month, RBN Energy President Rusty Braziel also said “a lot of replumbing is going to be required” across North America as the unconventional gas boom continues, especially in the Marcellus Shale, reducing the need for west-to-east gas pipelines (see Shale Daily, April 11). A prime example of this are plans to reverse flow on the Rockies Express Pipeline to carry shale gas from east to west (see Shale Daily, May 16).