The biggest capital spending reductions in the global oil and natural gas industry are — no surprise — led by producers whose assets are concentrated in the Lower 48 states, Raymond James & Associates Inc. said Monday. 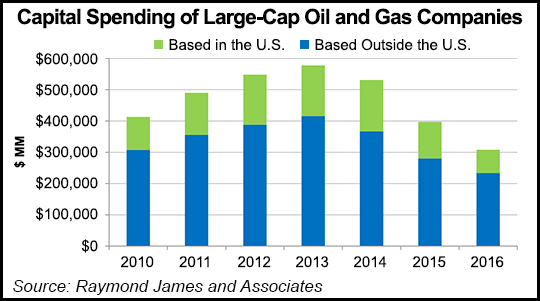 Analysts Pavel Molchanov, J. Marshall Adkins and Luana Siegfried issued a survey of 40 top-tier operators from key regions around the world, which compares capital expenditure (capex) budgets for the past couple of years. Average capex cuts are 22% this year, nearly on par with the average 25% reduction in 2015. The sample of large, mostly multi-national companies include 16 that are U.S.-based, all of which disclose financials and which encompassed more than two-thirds of global upstream investment.

“It is unambiguously the case that the U.S. is seeing a far steeper drop in spending than the global industry as a whole — just as it had greater-than-average increases in spending during the 2011-2014 upcycle,” the analysts wrote. All in, Raymond James estimated that U.S. spending cuts in 2015 and 2016 are about double the global average, mostly because of the short-cycle nature of the asset portfolios, i.e. unconventional drilling, which ramped up quickly and is coming down as fast.

“By the same token, U.S. spending stands to be the quickest to respond upward in 2017 as oil prices recover,” a forecast that Raymond James made in February (see Shale Daily, Feb. 8).

Outside the United States, capex is down almost everywhere, but how much varies. Upstream spend by Mexico’s Petroleos Mexicanos is down by only about 30%. Canada is a “mixed bag, with current production split close to 50/50 between oilsands projects and short-cycle drilling (conventional and shales),” analysts noted.

The global oil and natural gas industry has responded to the commodity meltdown with severe curtailments in capex, but the level of austerity implemented worldwide is unprecedented and undoubtedly will lead to a supply response, the trio of analysts said. “In our view, it is abundantly clear that oil prices will need to be materially higher (versus current levels) by the end of 2016 in order to support a more sustainable level of investment next year and beyond.”

The two straight years of huge capex cuts have not happened since “at least the 1980s,” they wrote. Onshore U.S. capex reductions are about double the global average, but nearly all geographies outside the Organization of the Petroleum Exporting Countries (OPEC) have curtailments of varying degrees.

“Here is the simple fact: two consecutive years of global investment curtailments on this scale are the worst in at least a quarter century,” analysts said. “While many of these cutbacks will not result in an immediate fall-off in oil production, the unprecedented collapse in investment will translate into a negative oil supply response that will play out over years to come and spread across a wide range of geographies.”

More than half of the 40 producers tracked actually spent less in 2015 than they had planned early in the year.

“Here is the striking thing: average cuts being planned for 2016 are nearly as steep as how 2015 ended up,” said the analyst team. “The bottom line is that the industry is embarking on its third consecutive year of lower spending, taking total spending to approximately three-quarters of 2010 levels.”

These types of capex reductions haven’t happened since the 1980s oil crash, and possibly not even then, as many of the key non-OPEC players did not disclose much information.

Here’s what analysts do know: at the time that 2016 budgets were being set, oil prices were at 12- and 13-year lows, creating the backdrop for why capex cuts are on average almost as steep as they had been in 2015. Only a handful of companies are cutting by less than 15% in 2016, while many more are cutting by more than 50%.

Only two of the 40 producers reviewed plan to boost spending this year. Spain’s Repsol SA is increasing capex by 3% while OAO Rosneft’s is to be 22% higher. Royal Dutch Shell plc’s nominal budget is 26% higher year/year (y/y), but including the BG plc assets, spending actually is lower.