For the first time in three years, the Energy Information Administration (EIA) is predicting a month-to-month decline in total natural gas production from seven of the most prolific onshore U.S. unconventional plays in March, and oil production is expected to remain virtually flat. 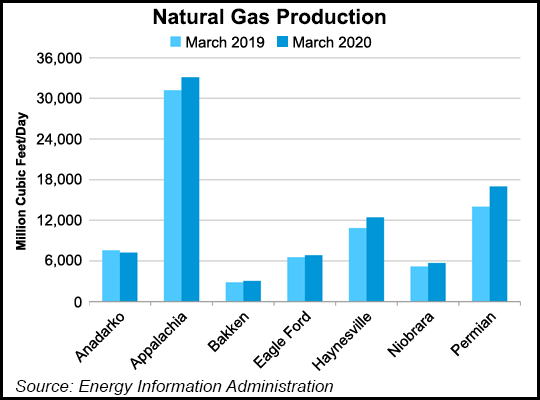 Total natural gas production from the Anadarko, Appalachian and Permian basins, and the Bakken, Eagle Ford, Haynesville and Niobrara formations, is expected to be 85.45 Bcf/d in March, compared with 85.62 Bcf/d in February, EIA said in its latest Drilling Productivity Report (DPR), which was released Tuesday.

At the same time, total oil production from the seven plays is expected to increase by only 18,000 b/d in March from February. EIA said it expects the plays to produce 9.18 million b/d in March, with the Permian the only play expected to see a month/month increase (4.86 million b/d, compared with 4.82 million b/d this month).

The productivity of new gas wells in the Big Seven plays is expected to decrease by 13 Mcf/d in March to 3.85 MMcf/d. At the same time, new well oil production per rig is expected to increase by 18 b/d during the month to 853 b/d.