Range Resources Corp. expects to spend about 85% of its $1.3 billion 2013 capital expenditures (capex) budget on liquids-rich and oil projects, predominately in wet areas of the Marcellus Shale and through horizontal drilling in the Mississippian Lime, the Fort Worth, TX-based company said Wednesday. 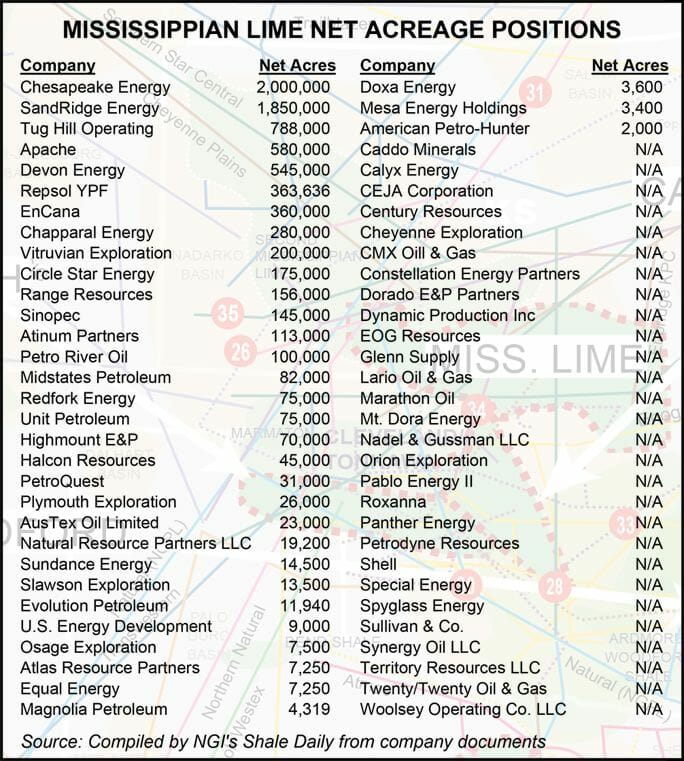 The capital budget is to be funded from operating cash flow, available liquidity under Range’s bank credit facility and proceeds from asset sales, including the planned sale of some Permian Basin properties in southeastern New Mexico and West Texas, the company said. Bank of America Merrill Lynch has been engaged to market the properties and the data room is scheduled to open in early January. The properties to be marketed are currently producing about 18 MMcfe/d and are 30% weighted to oil and natural gas liquids (NGL), Range said.

Chesapeake Energy Corp. recently sold most of its Permian Basin properties to Royal Dutch Shell plc and Chevron Corp. for a net $3.3 billion, which was considerably less than the $4-6 billion that some analysts had predicted (see Shale Daily, Sept. 13). Those assets produced about 21,000 b/d of liquids and 90 MMcf/d of natural gas in 2Q2012.

Range projects that the 2013 capex and its focus on the Marcellus and Mississippian will generate 20-25% year/year (y/y) production growth.

“We have the flexibility to shift capital from dry gas drilling to our liquids-rich plays, which generate exceptional returns for our shareholders,” said CEO Jeff Ventura. “In addition, we expect to achieve double-digit per share growth in production and reserves while continuing to focus on reducing expenses in our already low cost structure.” Projected growth for 2013 is expected to be accomplished at an average all-in finding and development cost of $1.00/Mcfe or less.

The Marcellus liquids-rich area and the horizontal Mississippian play, where Range has a combined acreage position of about 500,000 acres, have the highest estimated rates of return in the company’s portfolio.

Range recently said its planned five-rig drilling program for 2013 in the Mississippian Lime, which was scheduled to start up early next year, already is under way based on encouraging results from a crop of wells in the Nemaha Ridge area (see Shale Daily, Nov. 30). Based on its current plans, Range expects to run 10 rigs in 2014 and 15 rigs in 2015. The multi-year rig program is projected to hold “substantially all” of the company’s current acreage position. Next year’s five-rig program is scheduled to drill 68 wells, consisting of 51 producing wells and 17 water disposal wells.

Range is planning to reduce dry gas drilling primarily in the Marcellus Shale’s northeastern Pennsylvania area, where it expects to drop to just one rig in 2013 from up to five this year.