Continuing to focus ever more sharply on liquids-rich and oil projects, Range Resources Corp. has entered into an agreement to sell for $275 million some of its gassier Permian Basin properties in New Mexico and West Texas. 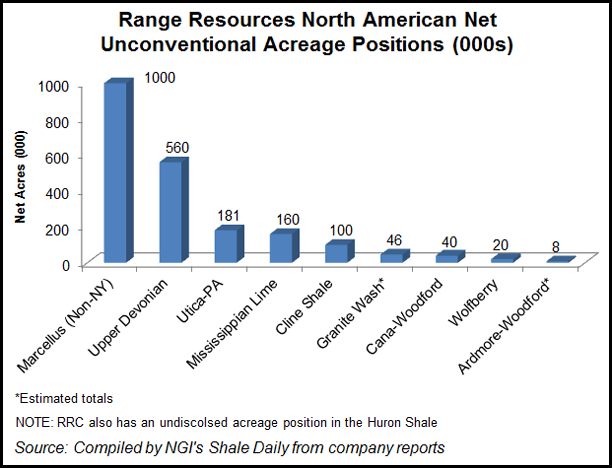 The properties being sold consist of 7,000 net acres that are currently producing about 18 MMcfe/d and are 30% weighted to oil and natural gas liquids (NGL), the Fort Worth, TX-based company said. The sale is expected to close in April. Range’s Permian team continues to target the Wolfberry and Cline shale oil plays in West Texas.

Proceeds of the sale were “well above” initial estimates, according to Wells Fargo analyst David Tameron.

With the sale, Range will have sold $2.3 billion in assets since 2004. Range sold most of its Barnett Shale leasehold in late 2010 to concentrate its exploration efforts in the Marcellus Shale (see Shale Daily, Oct. 29, 2010).

Range expects to spend about 85% of its $1.3 billion 2013 capital expenditures budget on liquids-rich and oil projects, predominately in wet areas of the Marcellus and through horizontal drilling in the Mississippian Lime (see Shale Daily, Dec. 13, 2012). The capital budget is to be funded from operating cash flow, available liquidity under Range’s bank credit facility and proceeds from asset sales.

Driven in large part by production out of its extensive Marcellus Shale acreage, Range reported record annual production of 753 MMcfe/d in 2012, an increase of 36% over 2011, with 4Q2012 oil and NGL volumes increasing 41%. For the ninth consecutive year, Range said it realized double-digit production growth.

“We accomplished a lot in 2012 that really helps to set up 2013 and beyond for Range,” CEO Jeff Ventura said during a conference call with analysts Wednesday. “We continue making progress with our plan of driving up and reserves on a per share basis, while driving down costs. This is beginning to significantly flow through to our bottom line, and will do so in an even more impactful way in 2013.”

Range last month said its production volumes in 4Q2012 hit a record 844 MMcfe/d, 35% higher year/year, which it attributed in large part to oil and NGL growth in liquids-rich shale plays, presumably the Marcellus Shale and the Mississippian Lime (see Shale Daily, Jan. 17). The company said oil and NGL production together increased 41% in the final quarter from a year earlier and was up 7% sequentially (see Shale Daily, Oct. 12, 2012).

“Our million-acre position in Pennsylvania provides for future growth with low reinvestment risk and strong rates of return…our reserves per well in the Marcellus continue to improve as we gain additional production history and continue to optimize drilling and completion designs.” And 2013 should be an even better year for production, reserves and earnings, he said.

“We expect to grow production in the 20-25% range, utilizing our existing low-cost, high rate of return inventory. Range’s liquids production is expected to grow disproportionately greater than overall production in 2013 as we continue to focus the majority of our capital in our liquids-rich areas…In addition to the Marcellus, our Horizontal Mississippian oil play is gaining substantial momentum and should add to our liquids production and reserves, while the Cline Shale, Wolfberry and Utica plays have exciting liquids potential.”