Appalachian pure-play Range Resources Corp. reported the highest natural gas liquids (NGL) premium to the Mont Belvieu, TX, benchmark in its history during the second quarter and recorded its best NGL price since 2014 as demand for fuels like ethane and propane has soared this year. 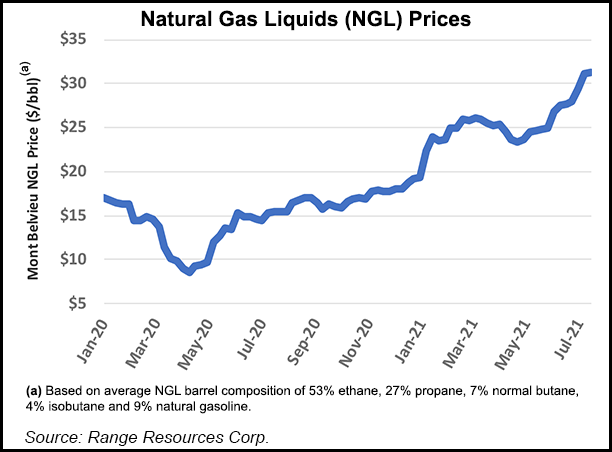 Range’s unhedged realized NGL price for the quarter was $27.92/bbl, or a $2.24 premium to Mont Belvieu pricing. Strong liquids prices helped push the company’s average realized commodity prices before hedges to $3.41/Mcfe, or 41 cents above Henry Hub during the period.

“This premium to Henry Hub is outstanding, particularly when considering the seasonality in certain natural gas and NGL markets, and is the result of our liquids production and diversified marketing portfolio,” CEO Jeff Ventura said during a call on Tuesday to discuss second quarter financial results. “This pricing uplift from liquids reduces Range’s breakeven natural gas price and improves margins when compared to producing only dry gas.”

About 65% of the drilling program this year is focused in the liquids-rich window of the Marcellus Shale in southwestern Pennsylvania. The company also has access to all major NGL takeaway capacity in the Appalachian Basin, allowing it to tap local markets in addition to those in Canada, along the Gulf Coast and overseas.

International demand for propane this year has left domestic stocks depleted and prompted a bidding war among domestic and overseas buyers for available supplies. The trend could leave the market tight this winter and support prices. Crude prices, to which NGLs are closely linked,  have also strengthened amid a global economic rebound from the Covid-19 pandemic. Over the last year, average NGL prices at Mont Belvieu have risen to more than $30/bbl from around $15, according to Range.

“From a fundamental standpoint, prices are good now,” said Alan Farquharson, senior vice president of reservoir engineering and economics. “But we also see them increasing quite a bit as we go through the rest of the year and as we go into next year.”

The company’s forecast 2021 pre-hedged NGL realization has increased by $7 since February, resulting in an increase of $250 million in expected revenue.

COO Dennis Degner said roughly 75% of the 25 wells turned to sales during the second quarter also came online late in the period, “setting us up for higher sequential production for the balance of this year.”

Range produced 2.10 Bcfe/d during the second quarter, of which 31% consisted of liquids. That’s down slightly from 2.35 Bcfe/d at the same time last year.

After hedges, Range said its natural gas, NGL and oil price realizations came in at $3.04/Mcfe, up from $2.19 in the year-ago period. Revenue also climbed to $435 million from $376.5 million over the same time.