A pair of natural gas pipeline projects scheduled for completion this year and participation in several others through the end of 2017 should help smooth what has lately been a bumpy road for Range Resources Corp., the Houston-based operator said Wednesday. 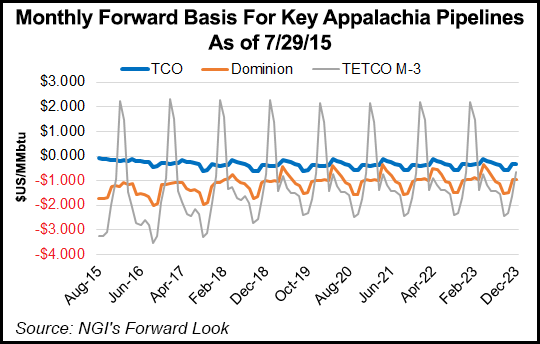 “The past several months have been a challenge,” Range CEO Jeff Ventura said during a conference call with analysts. “Appalachian natural gas differentials have widened as the basin awaits takeaway expansions and a more balanced regional supply and demand picture. In addition, NGL [natural gas liquids] netbacks have been weak in Appalachia, particularly propane, as regional supplies outstrip summer demand. In the face of these current pricing issues, we remain focused on things that will improve our netbacks in the near term, and things that will make range successful in the long run.”

“The good news is that we put some arrangements in place years ago that will come to fruition later this year which should make some of this pricing pain short-lived for Range,” Ventura said.

Range is an anchor shipper on Spectra Energy’’s Uniontown to Gas City project, which is due to start up its first leg on Saturday (Aug. 1) and a second and final leg Sept. 1 (see related story; Shale Daily, Aug. 19, 2013). “This will move about 200 MMcf/d gross, or about 170 MMcf/d net of our production from the local Appalachian markets to premium Midwest markets,” Ventura said. “Under current strip pricing, this should increase our realized price by approximately $1.00 on this production.

According to Patrick Rau, NGI director of strategy and research, new pipeline projects and changes in production profiles throughout Appalachia are expected to have varying effects on the three main regional pricing points that NGI includes in its Forward Look product.

Also this year, Range expects to see significant impact from the opening of Sunoco Logistics Partners LP’s Mariner East 1 NGL pipeline to the Marcus Hook terminal near Philadelphia (see Shale Daily, Sept. 28, 2012). Range is the anchor shipper on Mariner East 1, with 40,000 b/d of capacity — 20,000 b/d of ethane and 20,000 b/d of propane — and would gain access to 80% of the 1 million bbl propane storage cavern at Marcus Hook, Ventura said.

Sunoco is projecting Mariner East 1 to start up in late September, with commissioning completed a few weeks later.

“Mariner East 1 will lock in our Appalachian propane transport costs and result in significant transportation savings,” Ventura said. “It will also enable us to choose between Northeast markets and international markets, depending on demand and pricing.”

When Mariner East 1 is fully up and running it would — in combination with Enterprise Products Partners LP’s Appalachia-to-Texas Express ethane pipeline — result in about a $90 million increase to Range’s cash flow on an annualized basis, Ventura said.

Other upcoming projects that the CEO believes should benefit Range include Spectra’s Gulf Market Expansion project, which has a startup target of 4Q2016, and in which Range is an anchor shipper and has 150 MMcf/d gross of capacity (see Daily GPI, March 15); Energy Transfer Partners LP’s Rover Phase 1, which is scheduled to start up late next year (see Shale Daily, Oct. 31, 2014); and several pipeline expansions the company is participating in that are due to open late 2017, allowing Range to move an additional 900 MMcf/d to Gulf Coast, Midwest and Canadian markets.