Range Resources Corp. is nearing an “inflection point” in the Appalachian Basin, where its remaining natural gas pipeline capacity is set to come online in the next few months that will find it ramping up production before settling into a more methodical development pace, management said Wednesday. 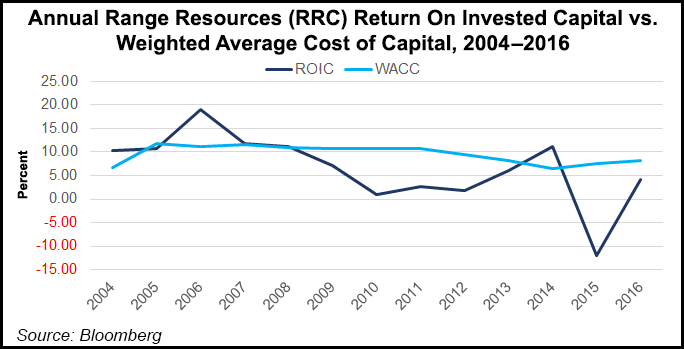 TransCanada Corp.’s Rayne and Leach Xpress projects and Texas Eastern Transmission LP’s Adair Southwest project are expected to come online by the end of the year. Combined with Energy Transfer Partners LP’s Rover Phase 2, which is expected to come online in early 2018, the projects would add another 900 MMcf/d to Range’s gross capacity in the region and possibly cut the company’s New York Mercantile Exchange differentials to minus 15 cents.

In the third quarter, Range said it produced 1.99 Bcfe/d, up from 1.50 Bcfe/d in the year-ago period and from 1.95 Bcfe/d in 2Q2017. To fill the new takeaway capacity, COO Ray Walker said the company would ramp production by another 200 MMcfe/d this quarter, with output forecast at 2.17 Bcfe/d. That would set the company up for 2018 and beyond as it then plans to slowly transition its focus from growth to deleveraging, he said.

“Many of our stockholders have been loud and clear that they expect the industry to focus on the next stage of the shale play development, which is focusing less on growth metrics and instead focusing on return of capital, cash flow and returning cash to shareholders when it makes sense,” CEO Jeff Ventura said Wednesday during a third quarter conference call with financial analysts. “We agree. We think it’s right for Range and our investors as well, and it fits well with our current stage of development in the Marcellus.”

The company has yet to finalize plans for 2018, but Ventura said Range would spend at or below cash flow, which should allow sufficient volumes for the pipelines coming into service. After next year, or if commodity prices improve before then, any excess cash would be used to reduce leverage. The company continues to pursue noncore asset sales for its remaining properties in the Midcontinent and Northeast Pennsylvania to help reduce $4 billion of outstanding debt.

Management stressed that its strategy would likely be similar to that of other Appalachian producers going forward. Just because there’s about 14 Bcf/d of infrastructure projects being developed throughout the region does not mean production will spike sharply to fill them, Walker said.

“We believe the industry cannot support the production increases equivalent to the capacity added from these projects in southwest Pennsylvania, especially given where the strip is today and with sweet spot exhaustion,” he said. “Unless we see a significant uptick in rig additions, we think the basin will see significant displacement of gas from local markets over the next few quarters as production is simply moved to better markets.”

Indeed, Ventura said Range would use more than half of its new takeaway capacity to redirect volumes to better markets outside the basin.

Operations in the other core area of the Cotton Valley Sands Terryville Complex in North Louisiana also should help Range with its obligations in the Northeast next year.

Management sounded a more optimistic tone about its Terryville program after struggling with poor results for most of the year. Range entered the play after it acquired Memorial Resource Development Corp. last year. The current producing wells were designed by MRD.

However, the first three wells designed and drilled by Range continue to perform well, management said, with 30-day initial production rates for two Upper Red wells of 25.8 and 20.7 MMcfe/d. Another Lower Deep Pink well on the same pad averaged 20.2 MMcfe/d over a 30-day period. Extension tests south of Terryville have also been encouraging, management added, with a recently completed well producing 3.5 MMcf/d per 1,000 feet of lateral.

The Appalachian division, however, continues to drive volumes. Those assets averaged 1.60 Bcfe/d, while the North Louisiana division averaged 360 MMcfe/d during the third quarter.