In yet another move that reaffirms its commitment to oil projects in the Midcontinent and the liquids-rich portion of the Marcellus Shale in southwest Pennsylvania, Range Resources Corp.is putting up for sale 70,000 net acres in West Texas and essentially exiting the Permian Basin. 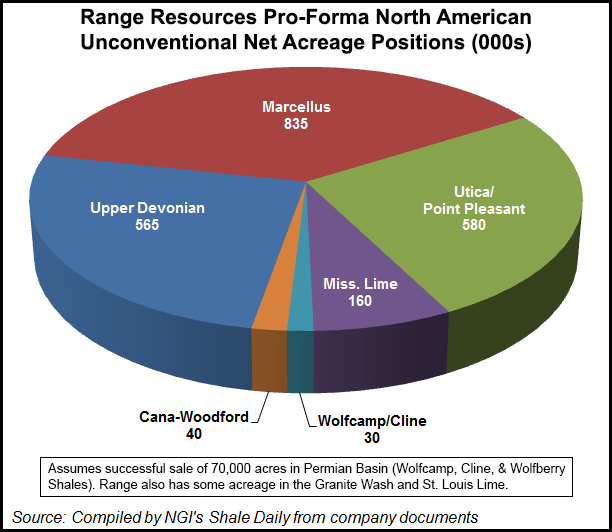 The company said in an 8K filed with the U.S. Securities and Exchange Commission on Monday that it had engaged Bank of America Merrill Lynch to market its Conger properties, where it is currently drilling Cline and Wolfcamp shale wells and continues to bring vertical Wolfberry wells online.

Almost all of the area in question, located in Glasscock and Sterling counties, is held by production, Range said in its filing, adding that current net production there stands at 5,000 boe/d.

In a note on Tuesday, energy investment bank Tudor, Pickering, Holt & Co. (TPH) valued the acreage at $300-350 million, including an undeveloped stretch.

In February, Range sold 7,000 net acres of Permian properties in New Mexico and West Texas at a price of $275 million in a nod to its focus on liquids-rich and oil projects (see Shale Daily,Feb. 28). Earlier, in 2010, Range sold most of its acreage in the Barnett Shale to concentrate on exploration efforts in the Marcellus Shale (see Shale Daily,Oct. 29, 2010).

As of February, Range had sold $2.3 billion in assets over an eight-year period, starting in 2004.

“It really doesn’t surprise me at all. They’re really not big enough in the Permian to move the needle as much as they can in the Marcellus, where the company has firm transport and firm sales agreements” said Will Green, vice president of E&P research at Stephens investment bank. “They just have a lot of infrastructure [in the Marcellus], and with a ton of scale it makes sense to utilize it.”

Green and the TPH analysts expect the proceeds from Range’s latest Permian sale to go toward further development in the Marcellus, particularly in the southwest.

Range holds about 1 million net acres in the play, and it has identified two core areas consisting of natural gas liquids and condensates in the southwestern part of the state, according to a presentation the company gave to investors last month.

Range said earlier this year that it expected to spend roughly 85% of its $1.3 billion 2013 capital expenditure budget on liquids-rich and oil projects, mostly in wet areas of the Marcellus and in the Midcontinent’s Mississippian Lime.

“The Permian has been pretty hot this year, and [Range] is probably thinking that maybe it’s a decent exit point, which goes back to that scale,” Green said. “They can throw a handful of rigs out in the Permian, but it won’t make as big a difference as what they can do in the Marcellus.”