Range Resources Corp. is preparing for enormous production growth from the Appalachian Basin in the coming years, making no secrets about its plans to grow volumes 20-25% annually, but the demand and takeaway capacity has to be there in order for it to profitably reach a stated goal of 3 Bcfe/d. 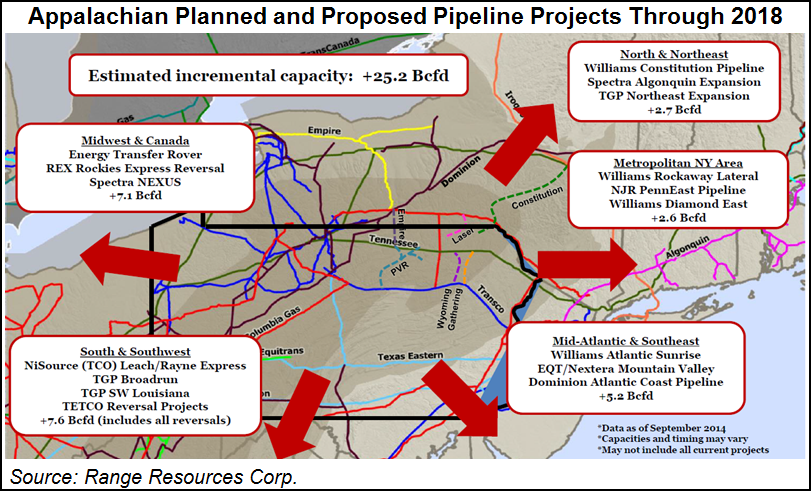 The strategy has been outlined consistently in quarterly conference calls and investor presentations, and even as its pace in the Marcellus Shale becomes more methodical after 10 years in the play and with other opportunities ahead in the Nora Field of Virginia and the Mississippian Chat of Oklahoma, a large part of that growth still is expected to come from its Appalachian assets (see Shale Daily, May 1). Last year, the company produced 940 MMcfe/d, most of which came from the Marcellus Shale.

During its second quarter conference call, CEO Jeffrey Ventura said “the wells have been identified; the compression and plants have been scheduled, and the takeaway capacity to multiple markets has been secured” to grow annual production rates between 20-25% for years to come (see Shale Daily, July 29). On a compound basis, Ventura said, Range should double net production every three to four years, with a potential to exceed 3 Bcfe/d in the near future.

Vice President of Engineering Technology Joe Frantz told a conference in Canonsburg, PA, on Tuesday that the company’s Marcellus wells are delivering beyond expectations, even as longer laterals and better completions are forecasted to keep pushing estimated ultimate recoveries higher. The company’s management team believes it has sufficient firm transportation capacity to support its net production growth, currently selling on 11 different interstate pipelines into 21 different indices, but it’s expressed a desire to add more for access to growing markets.

According to a presentation executives delivered at the Canaccord Genuity Global Resources Conference in New York City on Wednesday, the producer expects to have nearly 2.4 Bcf/d of firm transportation arrangements in place by 2018. But much of what’s anticipated relies heavily on Appalachian projects, such as the ET Rover pipeline, which Range agreed to ship on over the summer, which have yet to be built (see Shale Daily, June 26).

According to the presentation, the company said 45 Appalachian pipeline projects are in the works. Newbuilds and pipeline reversals, Range said, account for 25.2 Bcfe/d in incremental capacity that’s expected to be added through 2018. When combined with system expansions and LNG export facilities, the greenfield projects are expected to add 33.7 Bcf/d of Appalachian takeaway capacity by 2018.

The basin sorely needs it to help lift the price of gas for producers. Canaccord analysts have forecast that unconventional production in the Marcellus and Utica shales will rise to 35 Bcfe/d by 2018. And state data shows that more than 1,000 Marcellus wells were waiting on pipeline connections through the first half of this year (see Shale Daily, Sept. 19).

NGI’s Forward Look currently anticipates an average Henry Hub winter strip price of $4.062, compared to Dominion where the winter strip is only expected to average $2.703 in a symbol of the Marcellus gas glut.

In its most recent pipeline analysis, Canaccord analysts said if the midstream build-out continues as planned and if industrial, power sector and overseas demand for liquefied natural gas exports also comes along as expected, the spread between Henry Hub and Appalachian basis points will narrow, with a price uplift beginning in 2016, when capacity is expected to outpace demand (see Shale Daily, July 17).

Range has referenced “all of the above” in its desire to secure more firm transportation and grow production exponentially. The 33.7 Bcf/d of additional takeaway capacity planned for the region is expected to give producers access to the Midwest, Canadian, Southern, Mid-Atlantic and New England markets, according to the company’s presentation.