A Pennsylvania appellate court has upheld an order that Range Resources Corp. must collect information from third-party manufacturers about additives it used in wells at a controversial site in Washington County, and disclose them to nearby residents who filed a lawsuit three years ago. 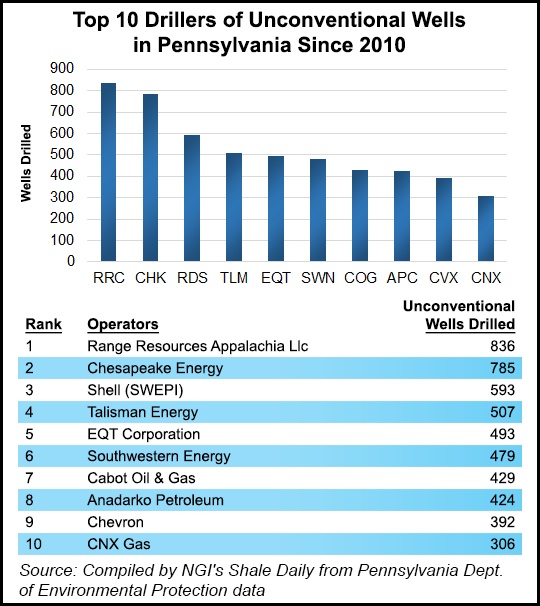 Range appealed to the state Superior Court last year after a lower court ordered that it collect information about the chemicals and any other substances it used at a site in Amwell — about 40 miles south of Pittsburgh — after third-party manufacturers failed to comply with a previous court order to disclose the proprietary information.

The lower court’s mandate came after a May 2012 lawsuit in which residents living near the site claimed personal injury and property damage that resulted from a leak at a wastewater impoundment serving wells in the area (see Shale Daily, Aug. 15, 2014). Those residents said their water was polluted by the leak.

In September, the Yeager impoundment in Amwell and four others were ordered by the state Department of Environmental Protection (DEP) to close as part of a broader $4.15 million fine the company agreed to for violations at six of its water impoundments in southwest Pennsylvania (see Shale Daily, Sept. 19, 2014). At the time, Range said certain locations had been underutilized or out of service for years, and added that a few were already in the process of being reclaimed.

Although residents in Amwell sued for damages, both the company and the DEP said after the fine was issued that monitoring and testing confirmed no impacts to drinking water supplies at any of the sites in question. It’s unclear if Range will appeal the Superior Court’s decision to the state Supreme Court; the company could not be reached to comment on Friday.

In its appeal, Range argued that it was improper to require the company to collect trade secrets and proprietary information from its vendors given that the information had not been deemed relevant to the lawsuit. While the appellate court said the matter should be reviewed, and recognized the importance of protecting trade secrets, it found that Range had no standing to make such an argument.

“Range Resources does not have a recognizable interest in the proprietary information it seeks to protect,” the court said in its decision. “To the extent the proprietary, chemical ingredients or products used at the Yeager drill site are entitled to protection, the right to assert such protection is held by the manufacturers of those products, not Range Resources.”

The court added that Range made “no attempt to persuade this court otherwise” in its appeal.

One of the Marcellus Shale’s earliest entrants, Range pioneered the use of water impoundments in the state, which are considered crucial to some operators in the region for recycling and reusing production and flowback water. Capable of holding millions of gallons of water, the impoundments have also proved contentious in Pennsylvania, where some residents have complained of odors, possible contamination and the amount of time they remain in service.

The DEP is at work on a package of new regulations for the state’s oil and gas industry. It has proposed that the impoundments either close within three years of the new rules’ implementation, or be upgraded and repermitted with a residual waste permit (see Shale Daily, March 9). According to information released by the DEP last month, six Marcellus Shale drillers in the state are operating 17 centralized impoundments, while another 13 permits are pending.