Range Resources Corp. has announced a deal to divest its Cotton Valley Sands Terryville Complex assets in North Louisiana, reaching an agreement with Castleton Resources LLC for up to $335 million. 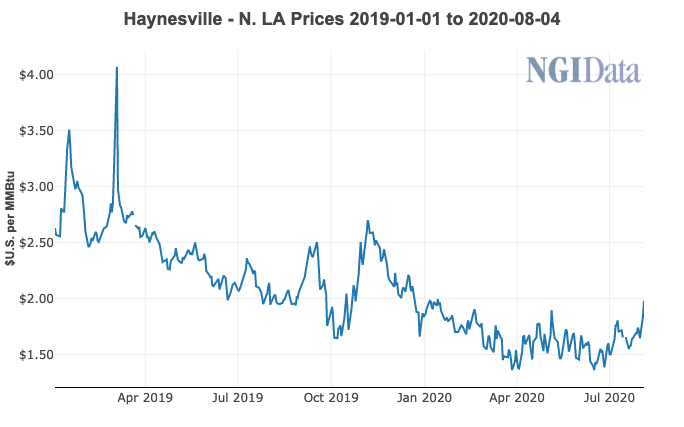 The deal comes at a low point in the commodity cycle, considering that Range took on the assets in 2016 with the $4.4 billion all-stock acquisition of Memorial Resource Development Corp. Two years later it became evident that Range was considering a sale after the properties underperformed, prompting the company to scale back in favor of core assets in the Marcellus Shale.

Range would gross $245 million of proceeds under the deal with Castleton, with the potential for $90 million of additional proceeds that depend on future commodity prices. Range would also retain certain midstream commitments through their remaining terms, but the company said it would use $28.5 million of the proceeds to reduce a portion of those commitments.

At the time of the sale, the North Louisiana assets were producing 160 MMcfe/d, with no drilling and completion activity planned this year. The deal is expected to close in August.

Pro forma for the Terryville acquisition, Haynesville Shale-focused Castleton would own more than 315,000 net acres in East Texas and North Louisiana with production of 500 MMcfe/d. Tokyo Gas Co. Ltd. said last week it would increase its ownership in Castleton and take a 70% majority stake, announcing plans to rename the company TG Natural Resources LLC by next year and acquire additional oil and gas properties in Louisiana.

Beyond their underperformance, the sale of the Terryville assets for Range ties in with an ongoing push to cut costs and reduce debt.

“After the sale of our North Louisiana assets, Range’s cost structure and capital productivity will take another meaningful step forward, driven by material improvements in our cash unit costs and a base decline of solidly under 20%,” CEO Jeff Ventura said.

He added that Range expects to reduce total debt for a third consecutive year in 2020, while the company highlighted ongoing cost cutting in the second quarter that included well costs of $600 per lateral foot, transportation, gathering, processing and compression expenses that improved by 10% year/year, and general and administrative expenses that improved by 28% year/year.

The company also revised full-year production guidance lower to reflect the Terryville sale. It is now guiding for 2020 production of 2.25 Bcfe/d, compared to the previous target of 2.3 Bcfe/d.

Range reported a second quarter net loss of $147 million (minus 61 cents/share), compared with net income of $115.2 million (46 cents) in the year-ago quarter.