Range Resources Corp. said Monday that it’s sold another overriding royalty interest in its core properties in Southwest Pennsylvania for $150 million to an undisclosed buyer as it continues to focus on cutting debt and strengthening its balance sheet. 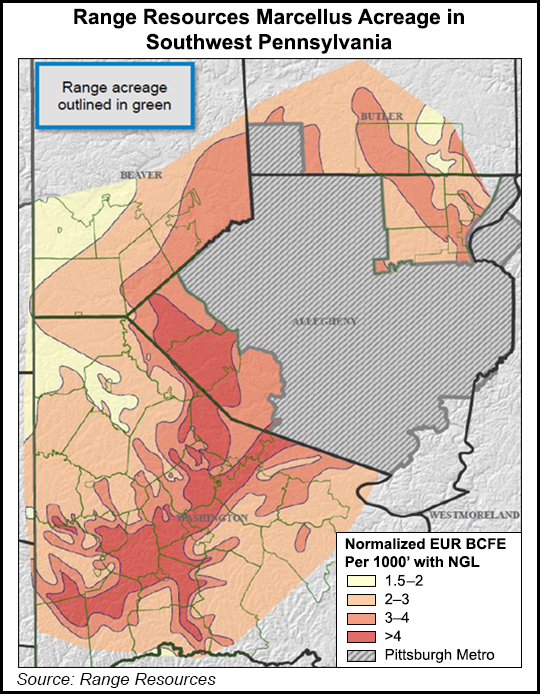 The company sold a 0.5% interest that applies to 350,000 net acres. The transaction closed last month and took effect March 1, 2019. Annualized cash flow associated with the sale is $12 million, based on first half 2019 pricing, but interest expense is expected to decline by $7 million, offsetting some of that loss, management said.

Over the summer, Range sold a 2% overriding royalty interest for its core properties in the southwest part of the state for $600 million in separate transactions. A year ago, the company also sold another 1% royalty interest in the assets for $300 million.

Range also said Monday that its bank commitments have increased from $2 billion to $2.4 billion, while its borrowing base of $3 billion and maximum credit facility of $4 billion remain unchanged.

The company’s board also authorized a $100 million share repurchase program beginning this month. The program is to be funded with asset sale proceeds, free cash flow and other transactions when the repurchases occur, which will be decided by management.

“The increase in lender commitments enhances liquidity and demonstrates the resiliency of Range’s assets and business in the current commodity environment,” CEO Jeff Ventura said. “Maintaining and further enhancing financial strength is a core principle of Range’s strategy, and debt reduction remains a priority.”

The company has sold $1.1 billion in assets over the last year, mostly royalty interests in its core properties. It also divested noncore assets in western Pennsylvania earlier this year and has not ruled out the sale of its large position in North Louisiana, where the Cotton Valley Sands Terryville Complex continues to underperform. Other noncore assets, like those in Northeast Pennsylvania, are also on the table.