Range Resources Corp. said a two-year effort to monitor ambient air quality near one of its Marcellus Shale well sites in southwestern Pennsylvania shows that its operations and those of its peers in the area do not pose serious or chronic public health risks in the region. 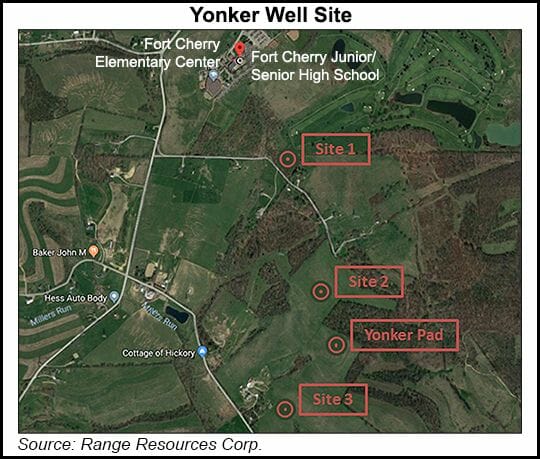 The study, conducted for Range by Massachusetts-based Gradient Corp., monitored air quality through the full-development cycle of a six-well pad in Washington County’s Mount Pleasant Township, where Range drilled the state’s first Marcellus well in 2004. The site is near a high school and elementary school campus, where Gradient collected data in what Range said was a first-of-its-kind study in Appalachia to track certain emissions from the time pad construction started through one year of natural gas production.

The researchers collected data from three locations, monitoring particulate matter and volatile organic compound (VOC) emissions at varying distances from the Yonker well site. Emissions were observed at various intensities during the drilling and production phases, but researchers said they were consistently below health thresholds.

The data, according to Range, showed that measured particulate matter and VOC concentrations were below health-based air comparison values. The data also indicated that air monitoring sites located between the well site and the Fort Cherry School District campus showed no air quality impacts of potential health concern at the schools, the producer said.

The report also said measured particulate matter and VOC concentrations did not provide evidence of long-term average concentrations in comparison to other regional data in Washington County tracked by the state Department of Environmental Protection (DEP) that are further from natural gas development. Moreover, the research reflected what Range said is the cumulative contributions of both air emissions from the Yonker pad and other sources, such as dozens of nearby natural gas well sites.

Data was gathered from December 2016 to October 2018 and analyzed by Gradient for six months. Range spokesman Michael Mackin told NGI’s Shale Daily that the company had received questions about how its operations might be impacting air quality near the school district, prompting it to commission a third-party study.

“Air quality effects of our operations have long been a priority, and we monitored a well site near a school campus to verify that our engineering designs and operations were conducted to minimize impacts and to be transparent and responsive to students, parents and those in the community,” the company said. “This third-party analysis aligns with other reports conducted by regulatory agencies and the school district, all of which have definitely shown that natural gas development does not create any chronic or acute health problems.”

Gradient’s findings, according to Range, are similar to those reached by the DEP and research by Cardno ChemRisk, which was commissioned by the school district to gauge air quality in the area.

However, the director of the Southwest Pennsylvania Environmental Health Project, Raina Rippel, said her organization’s independent findings have revealed a link between shale gas facilities and health-related issues. Other peer-reviewed studies have too, she said.

“Toxics and particle pollution are released from practically every stage of shale gas development,” Rippel said. “When gauging whether the health of nearby residents is at risk, we need to look at how, and how often, they are exposed. Spikes in exposures can cause acute effects even when average exposures are below standards, and long-term exposures can cause chronic effects even when yearly safety levels are met.”

The gas industry is a significant source of methane emissions and the largest industrial source of VOCs, according to the U.S. Environmental Protection Agency (EPA). While methane is more harmful to the environment, VOCs contribute to the formation of ground-level ozone, which is linked with a wide-range of health effects. In addition to helping form ozone, VOC emissions include air toxics such as benzene, ethylbenzene and n-hexane. Air toxics are known or suspected of causing cancer and other significant health effects.

PennFuture Energy Center Director Rob Altenburg, a former DEP staffer who analyzed emissions for the state, also shared reservations about the Gradient study. He expressed concerns about its scope and the fact that only one site was primarily observed.

Indeed, Range’s study was conducted in a hotbed of Marcellus activity. The state has issued more than 3,600 unconventional drilling permits in Washington County, which was the second-highest producing region during 4Q2018, accounting for nearly 1.2 Tcf of production.

Altenburg said the public has demanded more air monitoring by the industry, which he added was partly fulfilled by Range’s efforts. But he also wondered what an aggregate sample from a larger group of wells might show in the county.

Energy In Depth spokesman Dan Alfaro touted Range’s efforts, noting that the monitors used by Gradient are “extremely sensitive” and able to pick up not only emissions coming from the Yonker pad, but also other nearby well sites and even traffic.

“This is just another example of the oil and gas industry working to provide the community with the utmost transparency in its operational procedures and best practices,” Alfaro added. “It will go a long way to alleviate any potential concerns of those living in developing areas.”

Founded in 1985, Gradient is an environmental and risk science consulting firm with offices in five states. The company has worked in 31 countries, according to its website. It specializes in toxicology, epidemiology, geographic information systems and environmental/forensic chemistry, among other things.