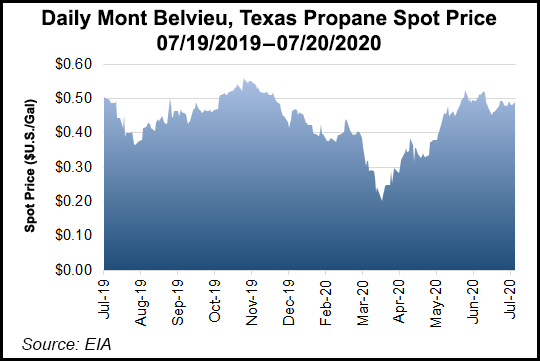 Range Resources Corp. said lower processing and transportation costs helped to offset weaker pricing for natural gas liquids (NGL) and other energy commodities during the second quarter, putting the Fort Worth, TX-based independent producer on track to spend at or below its 2020 capital budget.

Range dropped $99 million on drilling and completions activity during the quarter, with another $5 million used to fund acreage acquisitions and gathering systems. The producer has spent $235 million year to date, which puts it on course to spend at or below its $430 million budget for the year, the majority of which was weighed to the first half of the year.

Range, which operates mainly in the Marcellus, Utica and Upper Devonian formations, produced an average 2,349 MMcfe/d in 2Q2020, with full-year production expected to be at or slightly above 2.3 Bcfe/d.

Pre-hedged natural gas liquids (NGL) realizations were $12.80/bbl during the quarter, which represents a 37 cent premium over the Mont Belvieu-equivalent barrel. During the first quarter, Range fetched a $1.30 premium, although the lower NGL prices were partially offset by lower processing costs. The company maintained full-year NGL differential guidance of 50 cents to $1.50 above the Mont Belvieu-equivalent barrel.

Realized natural gas prices for the quarter, including the impact of basis hedging, were $1.41/Mcf, 31 cents below New York Mercantile Exchange (Nymex) futures. Range sold additional natural gas volumes in Appalachia following a pipeline outage in May that affected a portion of its transportation to the Gulf Coast. The company said the impact to differentials was offset by lower gas transportation expenses in the quarter, and it reiterated its full year 2020 natural gas differential guidance of 20-26 cents/Mcf below Nymex.

Range recorded crude oil and condensate price realizations, before hedges, of an average $14.81/bbl, or $12.28 below West Texas Intermediate (WTI). The weakness in condensate pricing was mostly due to lower regional demand, which has started to increase and should lead to improved differentials and fundamentals in the second half of 2020.

Range has deferred some liquids-rich activity into the last six months of the year, with its Appalachia condensate production expected to increase versus 2Q2020. However, because of recent pricing weakness, Range is revising its full year 2020 condensate differential guide to $8-9/bbl below WTI, which is expected to lower cash flow for the year by around $3 million versus prior guidance.

The Raymond James analyst team, led by John Freeman, said the company has more than $1 billion in senior notes maturing in 2022-2023 “without a clear line of sight towards meaningful free cash flow generation relative to debt maturities.”

North American exploration and production companies have around $86 billion of rated debt set to mature in 2020-2024, with about 57% coming due through 2022, according to research from Moody’s Investors Service.

Range is set to release its 2Q2020 earnings after the close of business on Monday, with a call with investors scheduled for Tuesday (Aug. 4).