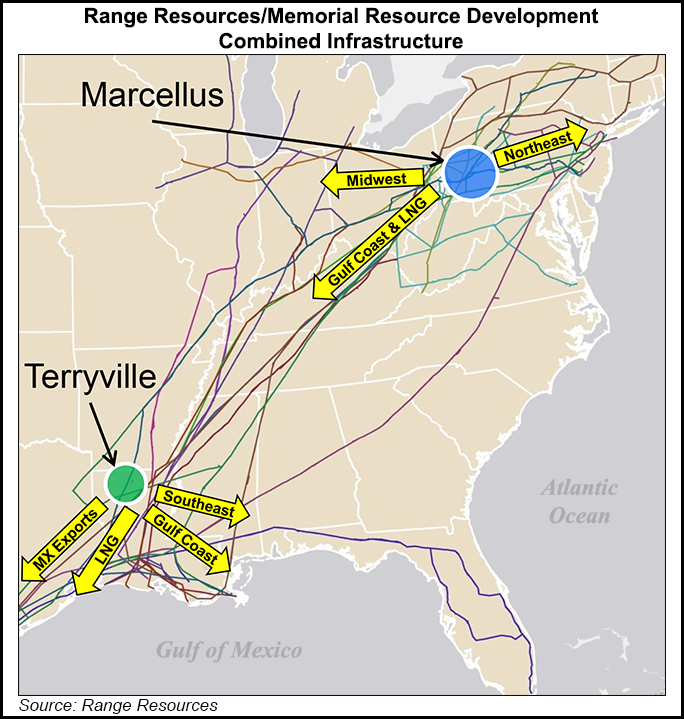 “This is an exciting announcement that brings together two high-quality unconventional producers with large de-risked, high-return projects into one portfolio,” said Range CEO Jeff Ventura. “This acquisition will give Range strategic positioning in both the Appalachian and Gulf Coast regions, providing greater marketing capabilities and opportunities, with added beneficial exposure to growing natural gas demand. The transaction is also accretive to our cash flow, bolsters our credit profile and enhances the overall portfolio.”

Houston-based MRD operates in the Cotton Valley Sands Terryville Complex in Lincoln Parish in North Louisiana. Proved reserves are 1,378 Bcfe and are 71% natural gas. MRD operates all of the assets; first quarter production was 420 MMcfe/d. There are 561 gas-producing wells on 241,130 gross acres, according to the MRD website.

The company primarily targets the Upper Red zone of the Terryville; however, other horizons include the Lower Red and Pink zones. Net core surface acres total 220,000, according to a deal presentation slide.

Fort Worth-based Range has 610,000 net core surface acres in Appalachia, most of it with stacked pay potential tapping the Marcellus, Utica, and Upper Devonian shales. In the Midcontinent, Range has assets with stacked pay potential in Oklahoma and the Texas Panhandle. The company is the first North American exporter of ethane to Europe (see Shale Daily, May 3; March 10).

During a conference call to discuss the deal, Ventura said it has been hard for Range to find an accretive acquisition that would offer returns competitive with those available from its Marcellus acreage. With the Terryville deal, Range is now in “two of the most economic gas plays in North America,” he said. The basins will compete for capital, and both have “great rock and great opportunities,” he said.

“The Terryville assets, particularly the ‘Upper Red’ are highly prolific wells developed by a high-quality technical team…Similar to the Marcellus, the Upper Red is a relatively low-risk, highly repeatable, high-quality rock. Also, similar to our Appalachian assets, Terryville is a stacked pay area that provides future upside in the ability to drive operational efficiencies and improvements to our cost structure in the months and years ahead.”

Terryville is also near growing demand and higher prices in the Gulf Coast region, he said.

The acquisition also offers Range a north-south arbitrage opportunity. For instance, during the winter when Northeast demand for Appalachia gas increases, Range can fulfill its commitments to the south with gas from Terryville and then sell its unneeded north-to-south transportation capacity, Ventura said during the conference call. “That’s just one example of things we can do,” he said.

“In addition to Range’s unique marketing arrangements in the Appalachia, Midwest and international markets, and its substantial portfolio to the Gulf Coast, we have significantly more exposure to Gulf Coast and southeast gas and liquids markets, along with LNG and Mexican exports with this transaction,” said COO Ray Walker. “We will have the ability and optionality to leverage and optimize Range’s extensive transportation and customer portfolios. And we see significant expansion of the Gulf Coast and Southeast markets going into the future. This combination will provide diversity and optionality in accessing the very best markets going forward.”

At one time, Range was active in the Barnett Shale to the west of the Terryville. During the call, Walker noted his own and his colleagues’ experience in East Texas and North Louisiana. About five years ago the company exited the Barnett in order to focus its efforts on the higher-return Marcellus (see Shale Daily, March 2, 2011). During the conference call, Ventura said to expect the company to continue such a high-grading strategy, as it is currently (see Shale Daily, Feb. 26), adding that one day its northern Oklahoma assets could be deemed non-core and put up for sale.

Wells Fargo Securities analyst David Tameron said in a note Monday that the “big picture takeaway for us is the move from a regional bellwether to acquire non-Appalachia gas signals, perhaps, [that the] longer-term growth outlook from Appalachia could potentially be constrained by midstream and takeaway [capacity limitations].” Tameron figured that the deal value equated to about $10,500 per acre at $5,000/Mcfe per day, or about 12.7 times earnings, slightly above the 12x of gas-focused peers followed by Wells Fargo.

The boards of both companies approved the deal. Closing, expected during the second half of this year, is subject to shareholder approval, some regulatory approvals and customary conditions. “Nearly all” of the MRD employees will likely be retained, Ventura said.