The railroad transportation of Bakken oil supplies continues to grow, and transporters are investing in new facilities on a pace with pipeline takeaway growth, according to the latest statistics from the North Dakota Department of Mineral Resources (DMR) and the state pipeline authority. 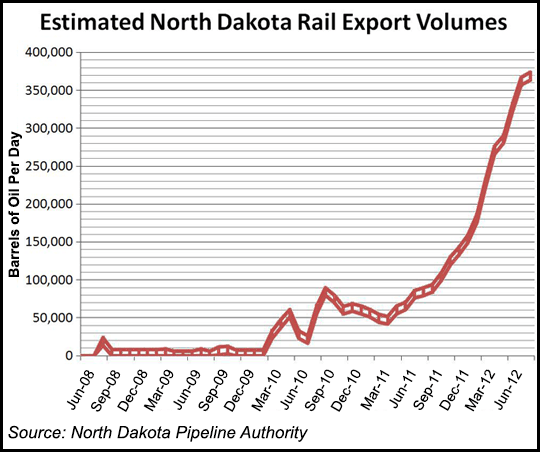 A recent local business report in Louisiana spotlighted San Antonio, TX-based NuStar Energy’s St. James, LA, terminal, which currently is unloading 80,000 b/d of Bakken oil and has plans to build a second rail facility to handle additional volumes of shale oil. Shipments are expected to reach 100,000 b/d from the Bakken by the end of this year, NuStar said.

North Dakota Pipeline Authority (NDPA) Director Justin Kringstad said the increased rail trend should begin to abate next year when pipelines now under construction begin operations. “We expect production to continue to grow and the next major pipeline expansion won’t take place until early next year, so any additional growth from August through the end of this year will have to be met with additional rail transportation,” Kringstad said.

And it is not just the Bakken that is causing the rail push, according to the Louisiana report. Other shale formations, such as the Niobrara, Piceance Basin and Granite Wash, face similar bottlenecks and rail unit-train terminals are being built as a solution. BNSF Railway recently said its capacity out of the Williston Basin is now at about 1 Million b/d (see Shale Daily, Sept. 6).

Analysts note that as pipeline infrastructure expansion continues to lag production growth in places like the Bakken, rail will be increasingly looked to as an option, even though it is more expensive than pipeline transportation. They point out that shipping supplies by rail to places like Louisiana, where prices are higher, can overcome the inherent cost disadvantage.

A ride for heavy crude on an Enbridge pipe from Western Canada to Chicago costs close to $4/bbl if space is available. If it’s not, rail transport over the same route will cost between $12 and $16/bbl (see Shale Daily, Oct. 5).

The St. James facility has the capacity to unload up to 120 tank cars at a time, with the capability to offload two entire trains in a day, or 140,000 b/d, according to NuStar.