The competition between rail and pipelines for moving Bakken sweet light crude oil in North Dakota will continue to be brisk, driven by WTI and Brent price spreads and by the ultimate added costs from stepped-up regulation of crude-by-rail transportation, according to an analysis by the University of Texas Center for Energy Economics (CEE) in Austin. 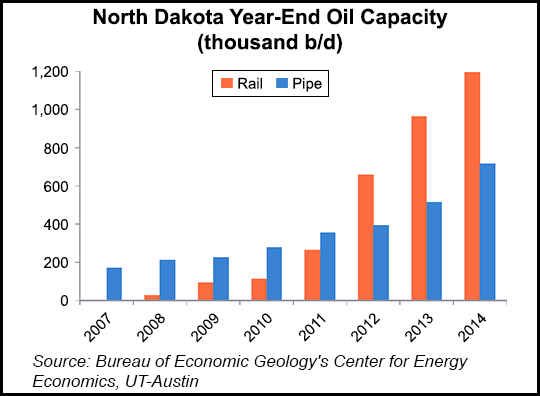 One conclusion from CEE’s data is that rail capacity to move oil (1.2 million b/d at last estimate) is unlikely to be equaled by pipelines, which have about 700,000 b/d in total capacity, up from 200,000 b/d in 2008. Rail capacity for moving oil five years ago was basically zero, so the growth on the rail side has been unprecedented.

“Rail capacity accounts for 63% of the total oil transport capacity from North Dakota, but in recent months rail cars transported 60-70% of the state’s oil,” CEE said. “That leaves up to 40% of the rail capacity not used.”

CEE also drilled down into the WTI-Brent price spread, which when widening encourages crude rail shipments, and when narrowing, as it has been lately, favors more pipe transport. With an average of $7 difference between Brent and WTI prices, and lows this summer of $3-4, in recent months less than 55% of the rail capacity out of North Dakota has been used, CEE said.

CEE’s analysis looks at the pros and cons of the two principal means of moving oil to market, along with dissecting the railroad’s recent revenue hits from less movement of coal. Pipelines face permitting delays, and railroads face the prospect of having to beef up safety, including newly designed double-hull tank cars that could drive up oil rail shipments by $1.85/bbl. In the United States and Canada, there are proposed two- and three-year phase-outs of the old tank cars, respectively.

“Railroads have been losing revenue with less coal shipments since 2011,” CEE said, while noting that the two biggest oil shippers, Union Pacific and BNSF, “have been able to keep the losses to a minimum.” CSX and Northern States have not been able to do the same, losing nearly $1 billion each over the 2011-2013 period from reduced coal shipments.

While the rails also have sand and LPG shipments to help offset coal reductions, CEE concluded the future call on rail is “uncertain,” given the Brent price spread narrowing and potential competition from Canadian pipeline projects.