U.S. domestic crude oil production is at its highest level in 20 years, outstripping pipeline capacity and, increasingly, making its way to refineries and storage centers via railroads, according to the Energy Information Administration (EIA). 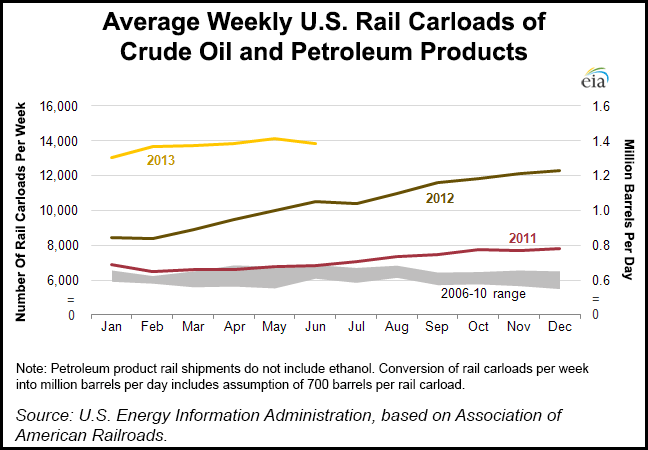 Data culled from the Association of American Railroads (AAR) indicate that nearly 365,000 carloads of crude oil and refined petroleum products were transported by rail during the first half of 2013, a 48% increase from the same period in 2012, EIA said.

“U.S. weekly carloadings of crude oil and petroleum products averaged nearly 13,700 rail tankers during the January-June 2013 period. With one rail carload holding about 700 bbl, the amount of crude oil and petroleum products shipped by rail was equal to 1.37 million b/d during the first half of 2013, up from 927,000 b/d during the first six months of last year,” EIA said. While the number of rail carloads of crude was up sharply from last year, the pace of increase has slowed, the agency said.

While AAR data does not differentiate between crude oil and petroleum products, “it is generally believed that most of the volume being moved in the 2006-’10 period was petroleum products and most of the increase since then has been crude oil,” EIA said. Crude oil accounts for about half of those 2013 daily volumes — nearly 700,000 b/d — according to AAR. The United States currently produces 7.2 million b/d, EIA said.

“The jump in crude oil production from North Dakota, where there is not enough pipeline capacity to move supplies, accounts for a large share of the increased deliveries of oil by rail,” EIA said.

“More Bakken crude oil moving to market by rail has helped narrow the difference between the spot prices for Bakken crude oil and international benchmark Brent crude oil in recent months to its smallest gap — less than $5.00/bbl — in more than one-and-half years. The narrower spread reduces the incentive to ship oil to coastal refineries. This development, along with the lack of railcars (some estimates cite a 60,000 car backlog) may explain the slower growth shown in 2013 carload data.”

Producers in North Dakota’s Bakken Shale are becoming ever more dependent on rail transportation to move oil to market. Rail transportation shot up to account for 75% of shipments in April, according to the state’s Department of Mineral Resources (see Shale Daily, June 18).

Canadian authorities have raised to 60 their estimate of dead or missing as a result of the crash and explosion Saturday in Lac-Megantic, Quebec of a train carrying crude oil originating in North Dakota (see Shale Daily, July 9). There were 15 confirmed deaths as of Wednesday.

A criminal investigation is underway into the cause of the crash of the 73-car train, which was bound for Irving Oil Ltd.’s refinery in Saint John, NB. The train, owned by Rail World Inc. and operated by Montreal Maine & Atlantic Railway Ltd., apparently got loose during a stop about seven miles from Lac-Megantic, sped downhill and into the small town, where it derailed, caught fire and exploded. Rail World CEO Edward Burkhardt told reporters Wednesday that an employee apparently failed to properly set the train’s brakes.