A unit of Tokyo Gas Co. Ltd. is buying an undivided 25% interest in the Barnett Shale assets of Quicksilver Resources Inc. for $485 million, marking a milestone for the debt-laden Fort Worth, TX-based producer, which has long sought a Barnett partner. 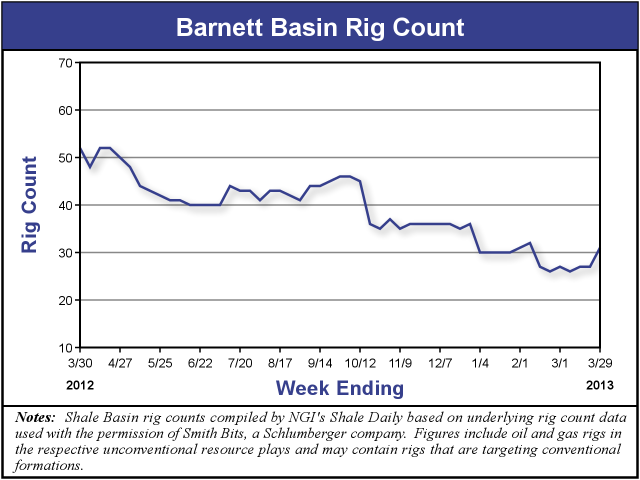 “We are very pleased to have Tokyo Gas as a partner to develop the full potential of our Barnett Shale asset base,” said Quicksilver CEO Glenn Darden. “We look forward to a successful long-term relationship, which will benefit both of our companies.”

Quicksilver will remain operator of the assets, and future development spending will be shared with TG Barnett Resources LP in amounts proportionate to the working interest of each. The deal is effective as of Sept. 1, 2012 with closing expected on April 30, subject to conditions. Quicksilver said proceeds will be used to pay down long-term debt, which is pegged at more than $2 billion.

Analysts at Tudor, Pickering, Holt & Co. (TPH) on Monday called the deal a positive for Quicksilver, which has sought a Barnett transaction such as this for more than a year. TPH said $485 million “is significantly above our expected value of $315 million,” with analysts adding that they were surprised due to the decline in value of natural gas/natural gas liquids-levered assets and the recent scotching of a planned Barnett asset sale by Pioneer Natural Resources Co. (see Shale Daily, Jan. 31).

Shares of Quicksilver closed up about 16% at $2.60 on Monday in heavy trading.

Quicksilver has struggled for some time to find a partner in the Barnett as well as in the Horn River Basin (see Shale Daily, Nov. 7, 2012). The company’s fourth quarter production was 31.5 Bcfe, or an average of 342 MMcfe/d. Production from the Barnett Shale was 22.7 Bcfe, or 247 MMcfe/d, which was down 6% from the previous quarter due to a reduction in capital activity (see Shale Daily, Feb. 26).

There were 31 rigs operating in the Barnett in the week ending March 29, a four-rig (15%) increase from the previous week, according to NGI’s Shale Daily Unconventional Rig Count. But activity in the play has dropped significantly over the past 12 months, with 21 (40%) fewer rigs now operating than at the end of March 2012. The total number of rigs operating in the 13 unconventional plays tracked by NGI’s Shale Daily was 788 last week, down 22% compared with 1,009 rigs last year.