After trying unsuccessfully for 20 years to start natural gas production in French Canada, a small Calgary company refuses to take no for an answer from the Quebec government. 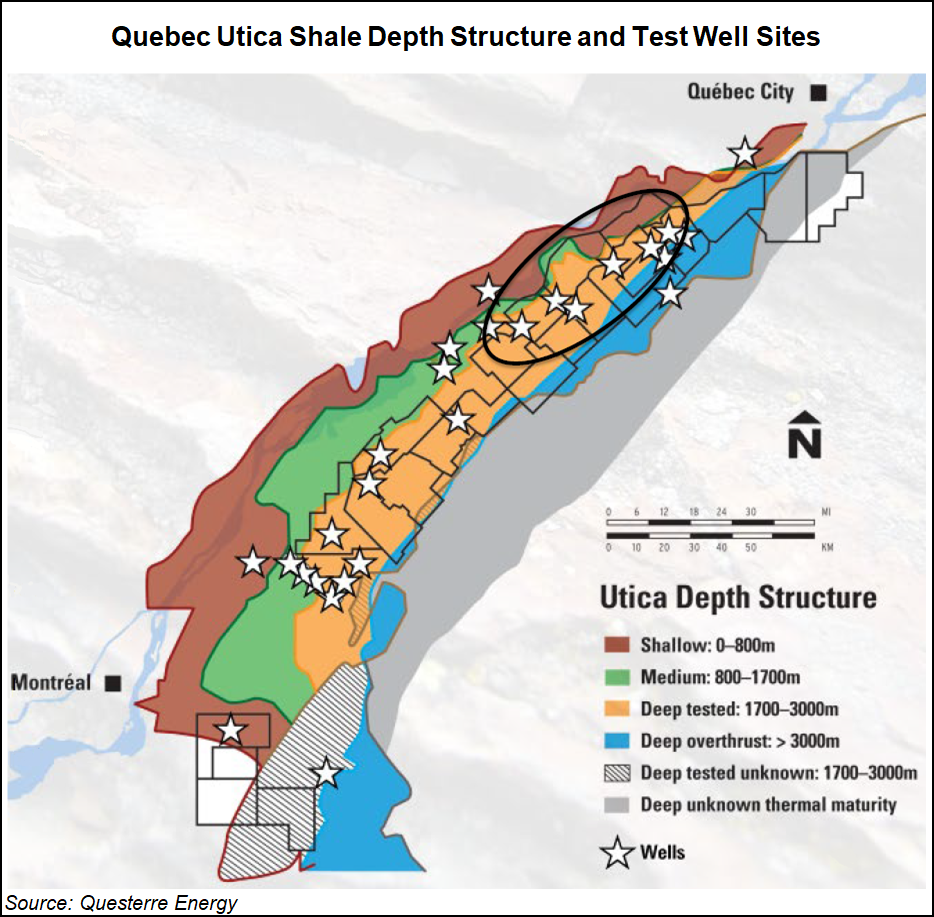 Questerre Energy Corp. announced an agreement to triple its Quebec drilling prospects in the Utica Shale to 1.1 million acres, despite a provincial ban against hydraulic fracturing to tap the formation.

The independent made the addition to its French Canadian properties by accepting 753,000 acres to settle a legal dispute with a former Quebec drilling partner, Repsol Oil & Gas Canada Inc.

“This puts us in the driver’s seat to advance our plans for social acceptability for a new clean tech energy approach and benefit sharing proposals with local communities and other stakeholders,” President Michael Binnion said. Completing the transaction is subject to the Quebec government’s approval to transfer exploration permits and licenses.

Although Questerre participated in a Quebec discovery well about 10 years ago, its modest daily production of 3.5 MMcf/d and 1,230 bbl of liquids is confined to Alberta, Saskatchewan and Manitoba.

In 2011 Questerre deferred two exploration projects in what was then its primary development area, the Utica’s St. Lawrence Lowlands in Quebec as unconventional drilling came under scrutiny.

Apart from a brief campaign comment by the winner of the provincial election last fall, Coalition Avenir QuÃ©bec leader FranÃ§ois Legault, the new government has given no sign of scrapping the drilling ban enacted by the former Liberal regime.

The comment by Legault, a hint that new evidence of public support might change the official disdain for fossil fuel activity, triggered an outpouring of protest from Quebec environmentalists and academics.

Last year the Quebec government toughen its five-year-old moratorium against unconventional exploration using fracturing into a permanent ban. The rules include outright prohibition against the use of fracturing to crack open unconventional deposits, effectively making Quebec’s share in the Utica formation off limits.

Drilling bans remain politically popular across Eastern Canada. In New Brunswick, the legislature in December voted to lift a drilling ban. However, a coalition government of the Conservative and People’s Alliance has made no changes since arousing protests with a fall pledge to reconsider the prohibition enacted by the former Liberal regime.