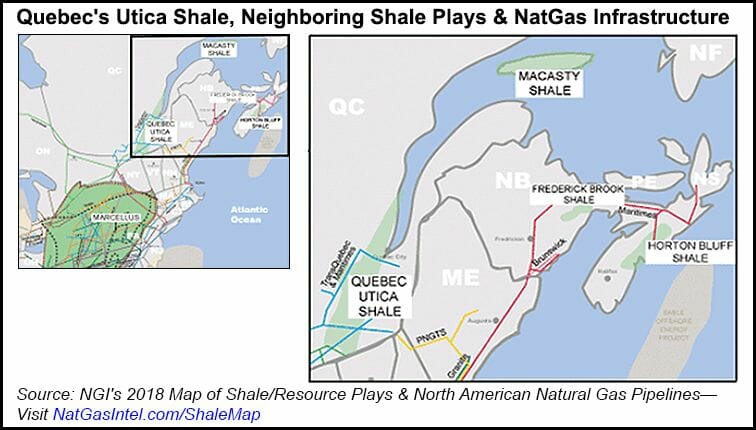 The Calgary firm closed a takeover of an 1,150-square-mile strip of French Canadian Utica Shale gas prospects in a region between Montreal and Quebec City known as the Lowlands, south of the St. Lawrence River.

Questerre President Michael Binnion said completing the deal with Repsol Oil & Gas Canada Inc. means, “we have regained control and operatorship of our giant natural gas discovery in the Lowlands.”

The transaction settled a legal dispute between Questerre and Repsol, which inherited a partnership role in Quebec shale gas exploration with the C$15 billion ($11 billion) purchase of Talisman Energy Inc.

Before the Repsol-Talisman takeover, first announced in late 2014, an environmental review by the Quebec government halted a Lowlands shale pilot program of horizontal wells and hydraulic fracturing. The review ended in enactment of a provincial fracturing ban.

The deal with Repsol tripled Questerre’s total Quebec Lowlands shale gas properties to about 1,560 square miles. Potential reserves have been estimated to be 3.9-21.3 Tcf by GLJ Petroleum Consultants.

“There is no certainty that it will be commercially viable to produce any portion,” said GLJ’s assessment of Questerre’s shale targets.

The fracturing ban remains in force and popular, with the Quebec government making no promises to change the rule.

“We are now well positioned to engage the government and all stakeholders on our Clean Tech Energy project,” he said.

The plan includes using electric drilling methods and production hardware that would use power bought from provincial government-owned Hydro Quebec.