The surprising announcement recently by anti-drilling Quebec provincial government leaders and several Canadian producers that they were getting together on joint ventures (JV) for exploration drilling and hydraulic fracturing (fracking) field trials in the Gulf of St. Lawrence, in the northern part of the province, far from civilization, was explained by a French Canadian opposition party, “deer don’t vote.” 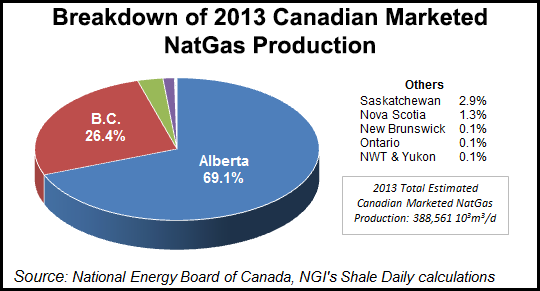 The deal announced by Premier Pauline Marois, three of her cabinet ministers and executives of the companies involved creates two JVs between a government agency, Resources Quebec, and four oil and gas firms to spend a projected C$190 million ($173 million) on remote Anticosti Island and the nearby sea floor. The ventures would test the Macasty formation, attempting to confirm predictions by generations of gas and oil prospectors that geological formations underlying the area hold huge oil deposits. Still in place is the ban on drilling and fracking in the southern part of the province.

In announcing the arrangement, Marois catered to her province’s renowned sense of national sovereignty by saying, “Today, Quebec is asserting its rights over the natural resources that belong to it.”

The agreement commits the Quebec government to cover C$115 million ($105 million) or 60% of the JV costs. In exchange, the government will emerge with 50% ownership of all previously issued Anticosti exploration permits and more than 60% ownership of any gas and oil discoveries.

A handful of old-style, vertical exploration wells have generated a wide array of Anticosti resource endowment estimates ranging from 30-50 billion bbl. But production forecasts reflected limitations of the old drilling and production technology before horizontal wells and fracking.

Only about 5% of the Anticosti natural deposits were previously rated as likely to be commercially recoverable. New Quebec government forecasts, taking the fracking suite of technologies into account, suggest the province eventually stands to gain C$45 billion ($41 billion) in royalties, taxes and business profits if the Anticosti industrial trials result in performances comparable to U.S. shale development.

Marois’ Parti Quebecois had called for a fracking halt and extended environmental review as part of its successful campaign platform in the 2012 provincial election. The previous, ousted Liberal government had suspended drilling licensing pending completion of technical studies. The Parti Quebecois stiffened the popular fracking blockade by declaring a formal, legislated moratorium for up to five years.

There is no sign of the provincial government loosening any restrictions on the Utica zone, which underlies a thickly populated, scenic farming, country residential and recreational region of 52 municipalities south of the St. Lawrence River between Montreal and Quebec City. Attempts to start trials of horizontal drilling and fracking in the area by Quebec- and Alberta-based producers aroused fierce protests (see Shale Daily, Jan. 16, 2013).

Quebec, along with the eastern provinces of Ontario, New Brunswick and Nova Scotia, accounts for very little of the natural gas that is produced in Canada. According to National Energy Board of Canada data, those four provinces combined to produce just 1.5% of Canadian marketed natural gas production in 2013, including nothing on record from Quebec.