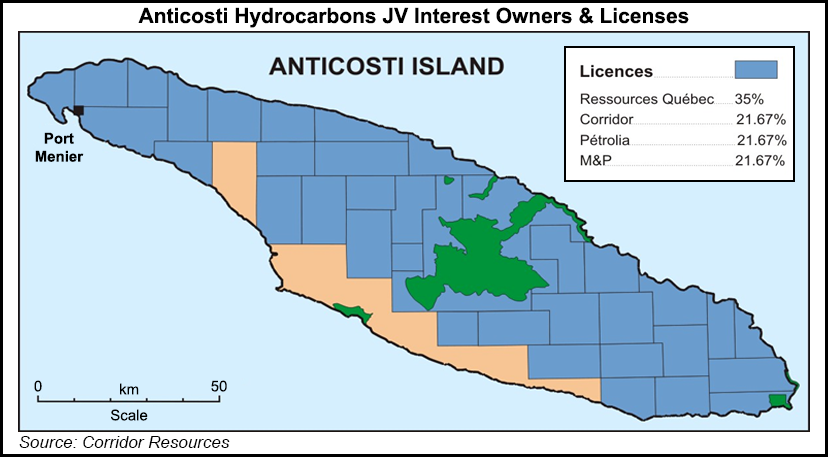 In Quebec City, Petrolia President Martin Belanger circulated a statement saying, “This law, the first of its kind in Quebec, enables us henceforth to plan the development of our exploration activities.”

Questerre president Michael Binnion, whose Calgary firm’s assets include Quebec drilling targets, agreed. “This new law is a milestone” that crowns six years of efforts to persuade French Canada at least to consider letting in gas and oil exploration and development, he said.

A lengthy political debate that concluded in enactment of the complex legislation Saturday notably included rejection by Quebec’s majority Liberal government of an amendment that called for a ban against horizontal drilling and hydraulic fracturing.

The political action upheld the first French Canadian foray into tests of shale production technology on Anticosti Island, in the Gulf of St. Lawrence 680 kilometers (400 miles) northeast of Quebec City.

Before the arrival of the advanced drilling and well completions technology, conventional methods were intermittently and unsuccessfully tried on well-known but difficult Quebec geological layers by a variety of companies for more than a century.

The French Canadian resources include an extension, south of the St. Lawrence River between Montreal and Quebec City, of the Utica Shale formation that sprawls across the northeastern United States. Anticosti Island sits atop the Macasty Oil Shale.

Junex Inc. recently announced setting a Quebec oil production record by pumping 17,748 barrels out of a well on the Gaspe Peninsula over 221 days ending Nov. 28 — an unspectacular average of 80 barrels per day. Exploration of the area will continue, the company said.

Current estimates by Canadian petroleum engineering firms peg the commercial gas production potential of Quebec’s Utica layer at 3.5-18 Tcf. The deposits are believed to include liquid byproducts such as gasoline-like condensate and propane. The Macasty layer is estimated to contain 20-45 billion bbl of oil.

The wide range of uncertainty built into the resource estimates reflects limited earth sciences knowledge of geology that has only been probed by a handful of wells using old technology.

The chances of building a gas and oil industry on Quebec resources are also uncertain, concluded a 2015 study of economic development prospects by the Canadian Energy Research Institute (CERI), a technical agency with corporate and government support.

The remote Macasty oil could be big enough to support production of 60,000 b/d but would cost C$95.50/bbl (US$72/bbl) to put on the market because all production and delivery infrastructure would have to be built from scratch, said CERI.

Quebec’s share of Utica gas deposits could support production of 1 Bcf/d but would cost C$3.72-4.43 (US$2.79-3.32) to extract and move as far as inlets to pipelines, the institute estimated.

“Potential hydrocarbon development in Quebec faces the test of a fiercely competitive marketplace,” said the CERI report. “Currently with production costs above C$95.50/bbl for oil it is not economic to develop. Natural gas production costs at C$3.72/Mcf means this is a marginal play and is dependent on cost minimization strategies including access to the North American infrastructure.”