EQT Corp. said late Tuesday it would bolt-on 90,000 net acres and associated midstream assets in West Virginia in a cash and stock transaction valued at $5.2 billion. 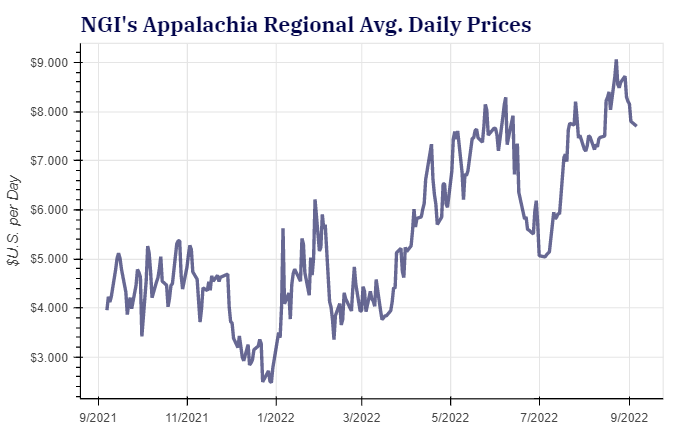 EQT, the nation’s largest natural gas producer, is acquiring upstream assets from THQ Appalachia I LLC and midstream assets from THQ XcL Holdings I LLC. Both companies are backed by funds managed by private equity firm Quantum Energy Partners, which is poised to become a core EQT shareholder when the deal closes.

The transaction would add 800 MMcfe/d of production from properties near EQT assets in the core of southwest Appalachia. It would provide 11 years of inventory in the Marcellus and Utica shales at current maintenance capital levels, EQT said. The transaction also includes 95 miles of midstream gathering systems connected to interstate pipelines in the region.

“The acquisition of Tug Hill and XcL Midstream checks all the boxes of our guiding principles around [mergers and acquisitions], including accretion on free cash flow per share, [net asset value] per share, lowering our cost structure and reducing business risk, while maintaining an investment grade balance sheet,” said EQT CEO Toby Rice.

Among the midstream assets being added are a 1 Bcfe/d rich gas trunkline, a 3.5 Bcfe/d lean gas trunkline with 600 MMcf/d of compression capacity, the 225 MMcf/d Clearfork processing plant and 20,000 b/d of condensate stabilization.

EQT billed the transaction as a way to strengthen its business by boosting free cash flow (FCF), increasing operational control and expanding its footprint.

The assets are expected to generate FCF at average natural gas prices above $1.35/MMBtu over the next five years.

Quantum CEO and founder Wil VanLoh would join EQT’s board after the deal closes, which is expected in the fourth quarter. He said in a statement that he’s ready to work closely with “the EQT management team and board to enhance the long-term value of the company.”

EQT expects to fund the cash consideration with money on hand, borrowings under its revolving credit facility and/or debt from the capital markets.

The company also said that with “even more confidence in the sustainability of our business,” it would double its share repurchase authorization to $2 billion and increase its year-end debt reduction goal from $2.5 billion to $4 billion.

The deal is the latest in a string of acquisitions executed by both current and previous management teams at EQT in recent years that have consolidated the basin.

Since Rice took the helm of the company in 2019 after winning a proxy battle, he has overseen nearly $4 billion of acquisitions for Chevron Corp.’s Appalachian assets and the purchase of Alta Resources Development LLC.

When the latest deal is completed, the company would hold 1.1 million net acres in Ohio, Pennsylvania and West Virginia, and produce 6.3 Bcfe/d, or more than 2 Tcfe annually.