Doubling down on a goal to get more oily, Denver-based QEP Resources said last week it plans to become a Permian Basin pure-play by divesting its assets in the Williston Basin and Haynesville Shale. 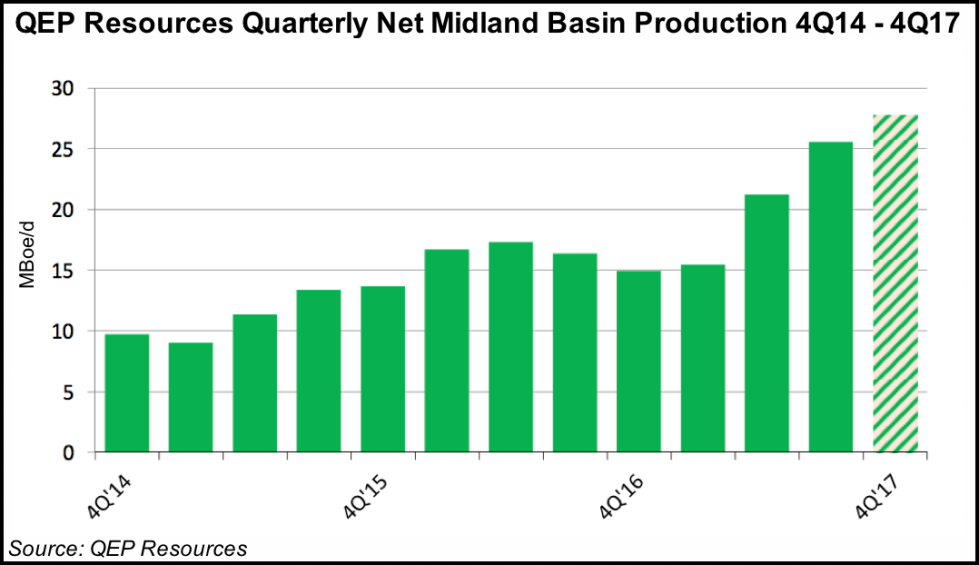 On a quarterly conference call last Thursday, CEO Chuck Stanley said 2017 results proved “significant,” with refracturing successes in the Williston and Haynesville, and “great progress” in the Permian toward the end of the year.

With its board’s approval, QEP has set sail on strategic and financial initiatives that call for selling Williston and Uinta basin assets with data rooms for the transactions to open in late March or early April, followed by selling the rest of the company’s assets not in the Permian, including the Haynesville/Cotton Valley portfolio later this year.

The sales are part of “a deliberate path” that QEP has followed for years to increase its oil production, Stanley said.

He estimated a five-month span for completing the asset sales. Last year QEP sold its Pinedale Anticline assets. Using a same scenario, Haynesville could be sold by year-end or early next year, he said.

Liquids production was about half of QEP’s output last year, compared with 15% six years earlier, Stanley said. Because the stock price remains undervalued, the sales are aimed to address that as the company gathers steam in the Permian. It also has slashed costs and is making financial improvements to manage debt.

As part of the new strategy, the board authorized a $1.25 billion stock repurchase and a $1.075 billion capital expenditure program for 2018.

He described the drivers behind the new approach as a desire to “simplify and streamline” operations, “concentrating our attention and efforts on our core Permian Basin assets where we believe we can deliver consistent production growth, while reducing drilling and completion costs.”

In narrowing its focus to the Permian, Stanley said the current mix of five or six rigs operating may be changed, but for the near term that is how QEP sees its rig deployment. “Our base case assumption is that we run five or six rigs.”

QEP is deploying more widely a “tank-style” development program that involves the use of barriers between hydraulic fracturing (fracking) crews and producing wells and between the individual frack crews.

“The idea is to minimize or eliminate frack interference either with producing wells or fracking into actual drilling wells,” Stanley said.

QEP tank wells are performing better than other wells, the CEO said. He said ultimately higher recovery rates are expected from the tank wells.