Qatar Petroleum (QP) is set to supply even more liquefied natural gas (LNG) to China starting next year under an agreement announced Wednesday. 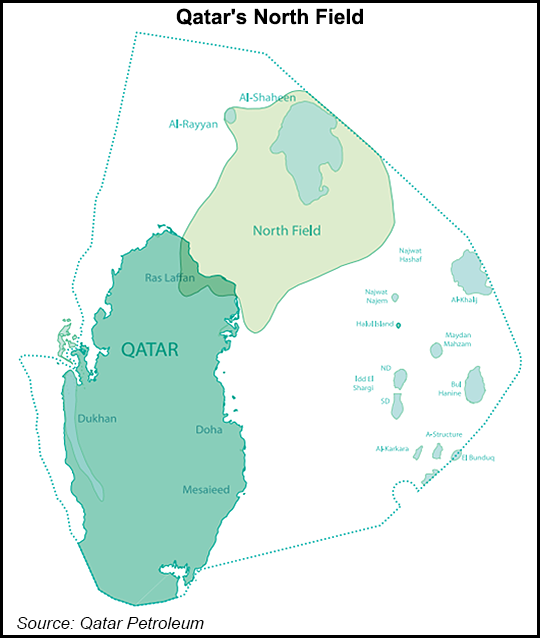 Under the sale and purchase agreement (SPA), QP would supply 3.5 million tons/year (Mty) over a 15-year term starting in January 2022 to the marketing subsidiary of China National Offshore Oil Corp. (CNOOC). Financial details were not disclosed.

The deal is the third long-term agreement QP has signed this year to supply LNG to China. In July, it signed an SPA with Royal Dutch Shell plc to provide 1 Mty over 10 years starting in January. Shell would then market the cargoes to China.

In March, it agreed to supply China Petroleum & Chemical Corp., aka Sinopec, with 2 Mty of LNG annually for a term of 10 years. It has also signed similar SPAs with buyers in Bangladesh and Pakistan this year.

The agreement also comes amid a broader push to solidify its dominance in the export market after having signed other recent supply agreements and securing the bulk of the world’s LNG shipbuilding capacity to serve its $30 billion North Field East expansion project, the largest LNG development ever sanctioned.

About two-thirds of Qatar’s LNG exports are delivered throughout Asia. The company has shipped 24 Mt to CNOOC alone since its exports to the country started in 2009.

Qatar has long been the world’s leading LNG supplier. It exported 77.13 Mt last year, slightly behind Australia’s total of 77.77 Mt, according to the International Group of Liquefied Natural Gas Importers.
Meanwhile, China is expected to overtake Japan as the world’s top LNG buyer later this year.