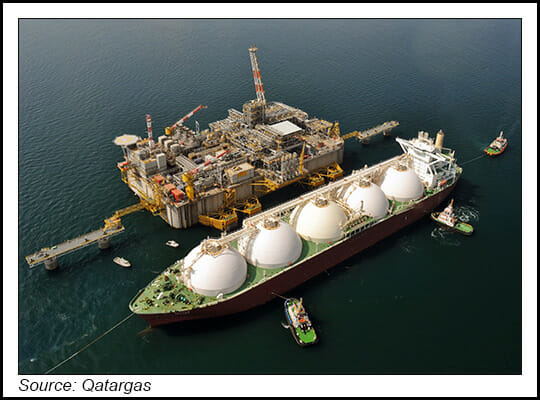 QP said the  contracts represent the culmination of front-end engineering and design work that began in early 2018.

The Samsung contract scope includes three LNG tanks and three loading berths and associated infrastructure It also includes options for two anks and one berth for the planned North Field South Project (NFS), which would expand the development further. NFS would increase Qatar’s production capacity to 126 mmty from 110 mmty by 2027.

CEO Saad Sherida Al-Kaabi said the detailed engineering activities would be done in the country.

Bids to bring on partners for the expansion are expected to be announced in the next six months. Partners would take on about 30% of the development costs. A process to launch bids to join in NFS would follow.

On Tuesday, Al-Kaabi said at the virtual CeraWeek by IHS Markit conference that QP will look for U.S. supermajor ExxonMobil to be one of its partners going forward. The pair are already developing the 18.1 mmty Golden Pass LNG export project on the Texas coast.

QP recently has moved to significantly cut emissions and become more active in the growing LNG spot market. The company started drilling wells early last year to feed the NFE project. The expansion was announced in 2018 and later grew in scope after successful appraisal efforts determined that productive layers of the North Field extended into Qatari land in Ras Laffan.