State-owned Qatar Petroleum (QP), the No. 1 liquefied natural gas (LNG) supplier in the world, plans to develop additional gas reserves in the country’s North Field to increase liquefaction capacity by 43%. 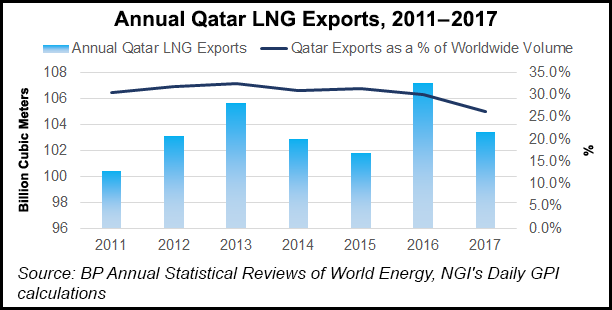 Plans are to add a fourth liquefaction train to raise capacity from the North Field to 110 million metric tons/year (mmty) from 77 mmty. The fourth train would add an estimated 32 mmty of LNG, 4,000 metric tons/day of ethane, 260,000 b/d of condensate, 11,000 tons/day of liquefied petroleum gas and 20 tons/day of pure helium.

QP, which supplies about one-third of the world’s LNG, last summer lifted a decade-long moratorium on North Field development to potentially increase LNG output. A petrochemicals project also was launched for the region, which is to include the largest ethane cracker in the Middle East.

“As we have announced last year, Qatar Petroleum has embarked on a project to develop additional gas from the North field and build three new LNG mega trains,” CEO Saad Sherida Al-Kaabi said. “Based on the good results obtained through recent additional appraisal and testing, we have decided to add a fourth LNG mega train and include it in the ongoing front-end engineering of the project.

“This new capacity increase will further strengthen our leading position as the world’s largest LNG producer and exporter, and will further boost Qatar Petroleum’s strategic growth plan,” Al-Kaabi said. “This production addition will have a great impact on Qatar’s economic growth and will help stimulate our local economy.”

The North Field expansion project is underway with various activities ongoing, including the front-end engineering and design, i.e. FEED of the onshore facilities, which is being executed by Japan’s Chiyoda Corp. The engineering, procurement, construction and installation contract for the offshore wellhead jackets is set to be awarded before the end of the year.

QP’s motivations to expand “are likely to be informed by a number of considerations,” beginning with costs, Farrer said.

“With worldwide activity in the oil and gas industry still low, now is a good time in the cost cycle to invest in a new project. And there are likely to be economies of scale from developing a bigger project, particularly in light of the promising appraisal results at the North Field, mentioned by Qatar Petroleum in its announcement…These economies of scale will make what is already the most competitive new LNG project worldwide even cheaper.”

Wood Mackenzie’s estimate for QP’s capital expenditures (capex) for the three megatrains previously announced was around $24 billion, encompassing both the upstream and liquefaction components of the project. Qatar could probably add an additional train without significant additions to capex, according to the consultancy.

“However, making sure mega projects are delivered on time and on budget will be a huge undertaking,” Farrer said.

Market share is another consideration by QP, he noted.

“Since Qatar announced its initial plan, the market environment has improved. Forecasts of future oil prices are higher and forecasts of future LNG demand have grown stronger, particularly in Europe and China. Having already taken the decision to compete for LNG market share, Qatar is doubling down, making sure that it will be fully able to benefit from LNG market upside.”

In addition, a “major competitor” for Qatari gas will be U.S. LNG exports, Farrer said. The United States “is currently engaged in a tariff war with China, the world’s largest growth market for LNG. Qatar could see this as an opportunity. It has recently signed a contract doubling the volumes that it will sell to PetroChina and is likely to be looking at further opportunities to supply the Chinese market.”

By “front loading development” for the hydrocarbon reserves now, Qatar also may be responding to the growing pace of decarbonization, which represents a threat to long-term demand for oil and gas.

In addition, “Qatar is keen to further its growth ambitions outside of the country,” Farrer said.

QP earlier this year snapped up its first significant international stakes in unconventional oil and natural gas resources in an agreement with ExxonMobil Corp. to become an equity holder in the Vaca Muerta formation in Argentina’s NeuquÃ©n Basin.

“Qatar Petroleum has publicly indicated it is in discussions with a range of players about the expansion” beyond its borders, Farrer said. “As part of those partnership discussions, we believe Qatar is expecting these companies to provide access to other discovered resource opportunities around the world. Another train could mean another partnership opportunity, furthering Qatar Petroleum’s international growth ambitions.”