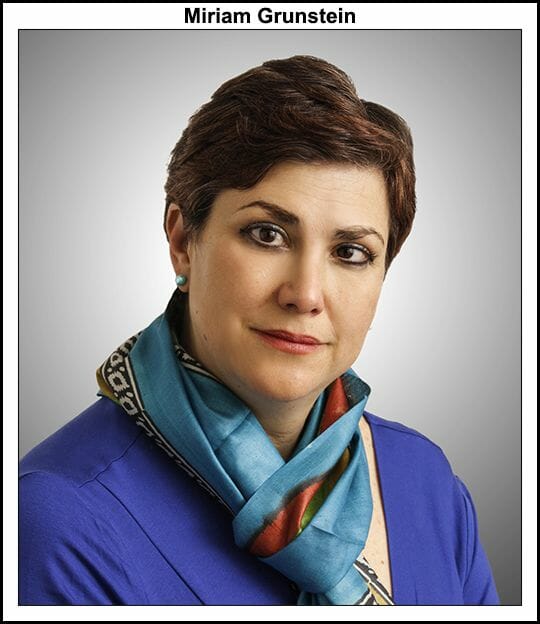 This 23rd Q&A in the series is with Miriam Grunstein, chief energy counsel at Brilliant Energy Consulting and nonresident scholar at Rice University’s Baker Institute for Public Policy, at the institute’s Center for the United States and Mexico. Grunstein has been with Brilliant Energy since 2014, and has extensive experience in negotiation, energy law, environmental awareness and impact, international relations, policy analysis, and joint ventures. She is also a part-time professor and researcher at the Universidad ORT Mexico.

Previously, Grunstein worked at Thompson & Knight from 2006-2009, where she focused on energy law, and was an adviser to the Mexican Energy Regulatory Commission (CRE) from 2002-2004.

Grunstein holds a bachelor’s degree in Latin American studies from the University of New Mexico, a law degree from the Instituto Tecnológico Autónomo de México (ITAM), and a doctorate from New York University in the language and literature of Spain and Portugal.

NGI: What are your thoughts on the first year of the Andrés Manuel López Obrador administration, particularly regarding the natural gas and energy industry?

Grunstein: I don’t think natural gas has been factored in much in López Obrador’s agenda. I think his paradigm is very similar to the presidents that preceded former President Enrique Peña Nieto, where natural gas was just an afterthought.

For example, oil has been the primary resource that governments worry about because it provides a very significant fiscal income. So, natural gas and the development of natural gas has sort of been an afterthought. The fact that AMLO has cancelled the possibilities of shale gas development is symptomatic of that.

During the Peña Nieto administration, there were big plans to explore unconventional resources, particularly shale gas. There is of course a lot of debate around that, especially whether it’s environmentally safe or even technically possible. In my view, it’s not, but the intent was there and the estimates of the shale reserves were very much boasted by the previous administration.

There has been very little mention of natural gas in government policy. Combined cycle power generation plants haven’t particularly been mentioned in this administration. There has been coal, which is absolutely surprising given the world trend towards fighting climate change. We have heard about the revival of the hydroelectric plans of CFE, which have an important environmental and social impact, and we’ve even heard of nuclear plans.

It is interesting because, it is a fact that Mexico needs to import more gas and Cenagas plans to import more natural gas. Just recently Elvira Daniel, the head of Cenagas, announced a big project about natural gas trading in Mexico.

NGI: What are Cenagas’s plans exactly?

Grunstein: They are developing a big natural gas trading program which intends to multiply the players for natural gas trading in Mexico. The degree of uncertainty regarding the pipelines and (CFE CEO) Manuel Bartlett’s decision to renegotiate them apparently could shake that up some.

It’s said that there are disagreements between Cenagas and the CFE. Elvira Daniel has her own plans at Cenagas to enhance natural gas trading, while Bartlett has his own plans at CFE, which is a major consumer of natural gas.

So, to answer the original question, my overall view is that the market is very chaotic and that natural gas has become an afterthought again. There is no solid commitment to either develop Mexican natural gas or seek the most cost-efficient sources. This is surprising because in the Permian Basin, for example, prices are negative and they are basically giving natural gas away. That continues to be a huge opportunity for Mexico.

NGI: Do you think that in the next few years, the administration will consider more plans for the natural gas industry or if it will become more of a priority for the current government?

Grunstein: If we have a scenario of scarcity, yes. AMLO is very concerned with the opinion of the business chambers here in Mexico, and many of them use natural gas power for their electricity and activities. If electricity prices skyrocket as a result of natural gas scarcity or lack of availability, he will react.

AMLO is sensitive to the comments of several business chambers here, so if they become upset with electricity prices related to natural gas, we could see it become more of a priority. But we will have to wait and see.

NGI: Now that we’re entering the second year of this government, what do you forecast for this year in the energy sector, as well as for the six-year administration?

Grunstein: My feeling is that we’re going to hit a brick wall.

For reasons that I haven’t fully explored, wells that were planned [by Pemex] for exploration have not been drilled…It’s a bad signal for energy reform.

I think we’re going to hit a crisis point. The new administration is going to find a lot of things that aren’t functioning as expected with the energy reform. I think that might mean a decision is made to rely more on Pemex, which is worrisome, particularly in natural gas. I think the natural gas industry is going to hit a big brick wall and will increase our energy dependency on the U.S., which is something we don’t want to happen. There are plenty of forecasts that predict Mexico will continue to increase imports of natural gas from the U.S.

NGI: Why do you think the natural gas industry in particular will hit a brick wall?

Grunstein: Well, because we have no infrastructure. We have no storage. The pipeline development that we’ve seen in recent years occurred in the previous administration. A lot was done, but not enough. We still have a lot of issues with land rights and rights of way and community resistance. I think that getting more pipelines built during this administration will be very complex. More complex than before.

NGI: You mentioned fracking and the debate about unconventional oil and gas development in Mexico. Do you think Mexico should still be considering fracking as a way to develop and produce natural gas and oil?

Grunstein: The concept I think is fine. The practical details I think are very complex. We are a country of great ideas and then something always falls through.

NGI: In terms of potential investors in the Mexico energy and natural gas market, in your opinion, what are the main concerns of international investors when considering Mexico as a possible capital destination?

Grunstein: The world is full of gas and buoyant with hydrocarbons. So, Mexico seems to be a pretty dumb and impractical idea when considering all of the other places you can go.

There are several regions of the world that are challenging and uninviting for investment. South America isn’t easy, nor is the Middle East, nor are countries in Asia. The world is very complex.

Maybe Mexico isn’t the best option for investment, but the U.S. is buoyant with natural gas. If investors need a market, the U.S. makes a lot more sense versus coming to Mexico to break your neck with a government that says one thing and then says exactly the opposite.