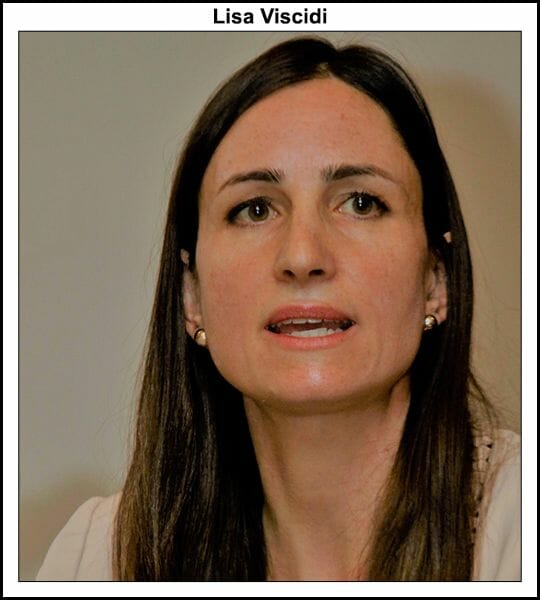 This 33rd Q&A in the series is with Lisa Viscidi, Director of Energy, Climate Change & Extractive Industries at Inter-American Dialogue in Washington D.C.

Viscidi, who has been with Inter-American Dialogue since 2014, founded and leads the Dialogue’s program on Energy, Climate Change and Extractive Industries issues in Latin America and the Caribbean, and also chairs the Dialogue’s Energy & Resources Committee. She is a specialist in Latin American energy with 15 years of experience in research, analysis and business development in oil and gas, mining and clean energy.

Prior to joining Inter-American Dialogue, she was Latin America team leader and New York Bureau Chief for Energy Intelligence Group, and also led research projects for public and private sector clients as a manager in Deloitte’s energy practice. Viscidi has written numerous reports and articles on energy policy, climate change, social and environmental impacts of natural resources development, and the geopolitics of energy, among other topics.

She has a bachelor’s degree in History from George Washington University and a master’s degree in Latin American studies with a focus on economic development and public policy from New York University.

Viscidi: I think the biggest focus continues to be on state control. In the oil, natural gas and power sectors, there have been attempts to increase state control and increase the role of the state energy companies, whether that’s the state utility CFE or state oil company Pemex. Additionally, there have been more government efforts to sideline the private sector and close opportunities for private investment. I would say that is the main overarching theme that we’re seeing right now.

This is part of the concept the government came up with during the campaign, which is the concept of energy sovereignty. It’s not really a widely used term and I think it was intended to mean energy independence, which means producing more of their own energy. But I think that that has been a real challenge.

So, I think the two aspects of energy sovereignty are energy Independence and state control. And I think the latter is really what’s really being implemented, and the former has proven very difficult.

NGI: What can Mexico do to take some strides towards that goal of energy sovereignty?

Viscidi: I think they are increasing state control over the energy industry across the sector, which we have seen in power and oil and gas. Bid rounds for oil and gas exploration have been suspended, for example. Another example is that the government ended clean energy auctions to provide generation from private companies to CFE.

This push for state control can specifically be seen in the renewable energy sector, where the energy reform for the first time allowed any size project to be built by private companies. There’s been a series of regulations that have closed some of those opportunities and given more of a role to CFE.

For example, Mexico recently issued a reliability regulation that essentially considers renewable energy not reliable enough and favors the dispatch of coal and oil and natural gas, which are mostly for plants that belong to CFE. So, in the renewables sector, if the goal was to close private-sector investment, I would say that they’ve achieved a lot.

However, in terms of becoming less dependent on imports, I don’t think anything has been accomplished. U.S. natural gas imports continue to be very high as a percentage of total gas consumption in Mexico, and they’re only going up. Mexico’s natural gas imports from the U.S. are at record levels right now. Pemex has been unable to increase its gas production, while gas from the U.S. is very cheap.

The issue is that Pemex on its own doesn’t have the capital to invest enough in exploration and production. It doesn’t have the ability to take on the risk that’s required to develop the high-risk/high-reward areas such as deep water. They need partners to contribute capital as well as technological expertise. And so Pemex, with its strained budget, has not been able to increase gas production and thus Mexico continues to be very reliant on imports.

Similarly, in terms of reducing imports on refined products, they’ve not been successful there either. Utilization rates at Mexican refineries continue to be very low, and they continue to be dependent on imports from the U.S.

NGI: Do you think Mexico should look to produce more natural gas, or, given the cheap natural gas prices in the U.S. and Texas, that the best option is to continue importing at this point?

Viscidi: I think that it’s better to continue importing because economically it’s the best thing for the country. Admittedly, it’s valid to be concerned about being so reliant on one source. And, with the Trump administration being so volatile, it’s not inconceivable that President Trump would get angry at Mexico and want to cut off gas exports. I don’t really think that would happen, but I think it’s legitimate for Mexico to try to diversify their sources.

I think it makes sense for Mexico to have a long-term goal of trying to increase their own natural gas production and maybe to consider other sources of imports like LNG so that they’re not so heavily reliant on the U.S. Certainly, it wouldn’t make sense for Mexico to try to stop importing natural gas from the U.S. when they’re getting such good prices. In the last year or so, prices for natural gas have gone negative at certain times, so how could Mexico not take advantage of that?

NGI: From an international perspective – for example if you’re an international company investor and you’re looking at Mexico from abroad — what would you say is the biggest concern or worry that people have about the Mexican energy industry at this time?

Viscidi: I think the biggest worry is the unpredictability of regulation.

If contracts have been signed and projects are economically viable based on certain metrics and regulation, and then suddenly those regulations are changed, the project might not be viable anymore. Or it might mean the project is no longer even allowed to be built.

For example, in the renewable energy sector, there were a number of generation projects where the contract was awarded, they were in construction, and the government decided to stop doing site visits. They said it was because of Covid-19, but the decision came on top of a number of other moves specifically targeting renewable energy, so the sense is that they’re trying to stop projects.

Sometimes regulatory adjustments are necessary. Sometimes regulators don’t get it right the first time and need to adjust. I’m not saying they should never do that, but there’s been such major changes so suddenly, that contract sanctity is now a major concern in Mexico. It’s definitely the biggest concern for energy across the board.

NGI: It seems that, in regard to contract sanctity, the rhetoric about “unfair” natural gas pipeline contracts that President López Obrador spoke about so much last year is now just being transferred to renewables.

Viscidi: That attempt to unilaterally renegotiate the pipeline contracts was a huge red flag. Even early on in the administration, the airport contract cancellation — even though it’s not an energy project — really sent a negative signal to investors.

NGI: How do you think that will affect or shape energy investment in Mexico over the course of the current administration?

Viscidi: I think we’ll see very little private investment. There are some companies that are well established in Mexico, such as AES, Ienova, and several oil companies that already won rights to develop blocks. They’re not going to leave altogether. They are really trying to see how they can maintain their investment and try to get the ear of the government. That hasn’t been successful at all thus far, but I think those companies are not just going to walk away. They’re going to ride it out if they have to and they’re going to try to have the best conditions while they’re there.

But I think any company that was considering going into Mexico, it’s highly unlikely that they would do so now.

NGI: As complicated as the Mexican energy industry currently, do you see any areas of opportunity for the sector, either for local or foreign investment?

Viscidi: There are exploration and production contracts that were awarded in the first bid round and those are still good opportunities to develop the resources available.

Mexico has a lot of untapped oil and gas resources, particularly offshore where Pemex just didn’t have the ability to drill at the rate required to take advantage of what’s there. Mexico also has a lot of unconventional resources in the north. I think that’s less attractive. For now, López Obrador has said he’s against fracking, although I could see that position being reversed.

So, the contracts that were already awarded and where there are areas to be developed, I think that’s still a good opportunity. And those are in progress.

With the power sector, things are much more uncertain. There have been more changes that directly affect current projects.