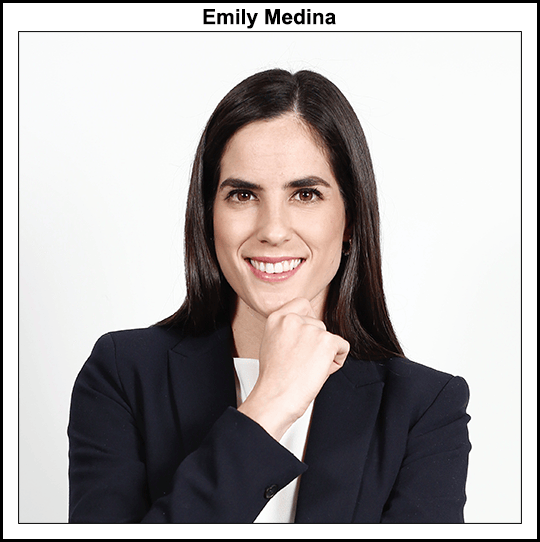 This 40th Q&A in the series is with Emily Medina, Non-Resident Fellow at the Energy Policy Research Foundation, Inc. (EPRINC) in Washington DC since 2018, where she focuses on oil and gas developments in Mexico and the bilateral energy relation between the U.S. and Mexico.

Medina is the founder of her own energy industry consulting firm and has experience working with both the private and public sectors on energy and environment issues. Additionally, she is an Associate of the Mexican Council on Foreign Relations and writes a regular column for Mexico’s El Financiero newspaper. Medina has also authored several reports and articles on Mexico’s energy sector examining geopolitical risk, market trends, and the energy transition.

Medina holds an M.S. from New York University in Global Affairs with a concentration in Energy Policy and a B.A. from University of North Texas in International Studies.

Medina: What is worrying about the energy self-sufficiency strategy of this government is not only the fact that it will not be achieved and that economic resources that could be used to improve energy security are being misused, but the fact that this goal is based on purely ideological fundamentals.

The geographic location of Mexico and its integration with the United States puts the country in an advantageous position to access readily available and affordable energy products from its neighbor north of the border, which happens to be the largest producer of oil and gas in the world. Mexico imports 70% of its natural gas from the U.S. which feeds the country’s power plants to generate electricity for a growing population. Cutting the supply of natural gas and fuel imports, for the sake of being energy self-sufficient, at a time when national oil and gas production is at historically low levels could significantly hamper the country’s economic development.

Instead of aiming to become energy self-sufficient by injecting more and more resources into Petróleos Mexicanos (Pemex) at a time when the country is struggling economically — with a projected economic contraction of 10 percent this year — the government’s goal should be to increase energy security by working in coordination with the private sector to further develop its own domestic natural gas market and energy resources and to gradually displace energy imports, if it makes sense economically. The government’s focus should be on delivering affordable, reliable, and clean energy to end users in Mexico. The goal of being energy self-sufficient under this administration’s proposed policies puts us on a very different path.

The strategy of strengthening Pemex at the expense of the private sector for the “rescue of the energy sector” is far from having a favorable impact on the country’s oil production and may affect the achievement of production goals putting the development of oil reserves at risk. The Energy Ministry has yet to assign 66% of the country’s prospective resources, mostly off-shore and unconventional resources. If there is not a plan in sight to explore and develop these resources the risk of them becoming stranded assets increases.

The government’s production goals are ambitious. The 2021 budget includes an oil production target of 1.85 million b/d for that year and projects production to reach 2.27 million b/d by 2024. While the average oil production level reported by CNH up to August of this year is 1.67 million b/d. Furthermore, oil production in the country is expected to remain at around 1.60 million b/d through the remainder of the president’s term. This is largely due to natural declines in mature fields such as Pemex’s Ku Maalob Zaap, and insufficient budget allocation for exploration and development activities.

The new Dos Bocas refinery located in Tabasco continues to be the most important project for this government and the one with the most capital designated in the 2021 budget. However, since 2019 the Mexican Petroleum Institute has warned that the project is not viable and will end up costing $14.7 billion dollars instead of the $8 billion dollars estimated by the government. Plans to continue carrying out the building of the Dos Bocas refinery could seriously jeopardize the country’s public finances by increasing its debt resulting in a loss of investment grade ratings.

NGI: In your opinion, what is the most worrying issue in the Mexican energy sector today?

Medina: The possibility of a change to the constitution on energy matters and a reversal of the reform would mean a setback for Mexico’s energy transition making energy prices more expensive for Mexicans as well as potentially risking energy supply availability to promote economic development. This, for me, would be the most worrying issue.

Unfortunately, and although there has not yet been a change to the regulatory framework, this government is already taking various actions to reduce competitiveness in the energy sector, giving priority to former monopolies Pemex and the Comisión Federal de Electricidad (CFE). These actions include the cancellation of clean power auctions and oil bidding rounds, as well as weakening regulatory bodies in the energy sector CRE and CNH as well as competitive watchdog COFECE.

NGI: Are there growing fears in the sector that the government will seek to reverse and/or change part of the energy reform?

Medina: The government has made it very clear that it is against the energy reform that was passed by his predecessor, and has done everything possible to prevent a level playing field between the private sector and state companies CFE and Pemex. The fact that President López Obrador won by majority vote and currently has a majority in congress and enters the 2021 elections with that advantage, increases the risk that if he wins the elections, he will be able to secure a majority to amend the constitution.

Since the president took office, he declared that he would respect the contracts of the companies that participated in the oil rounds during the previous administration. These companies can have a certain degree of confidence in the investments that they have made thus far. However, I think that the announcements about possible modifications to the energy reform are already holding back new investments in the energy sector and are also generating an increased sense of uncertainty for companies about their assets in the country. Some companies are already thinking on how they might defend their assets if there was a constitutional change under López Obrador.

In addition, for Mexican and international companies that already operate in the country there is a greater sense of frustration and dissatisfaction due to the irregularity in the granting of permits and regulatory obstacles that hinder their operations. This could possibly cause them to re-think their investments in Mexico if the government itself makes it difficult for them to conduct their operations as stipulated in the law by instead privileging state-owned companies Pemex and CFE.

NGI: In your opinion, what could the government implement to strengthen the sector in the short term?

Medina: I think that this government should open channels to promote private participation along the energy value chain. The Oct. 5 announcement of an agreement to reactivate the economy provides an opportunity for the private sector to form “strategic alliances” with Pemex in the development of five energy infrastructure projects. However, the extent to which private companies will be able to participate is unclear.

I believe that if the government is serious about wanting to attract private investment it should release a wider portfolio of projects to satisfy infrastructure needs not only in cooperation with Pemex, but also allowing companies to participate independently in the development of large scale energy infrastructure projects to increase efficiency and reduce Pemex’s debt burden.

I also think that the government should reactivate the oil rounds and farm-outs to develop its abundant natural gas and oil reserves without compromising the country’s finances. Pemex does not have the economic or technological capabilities to develop the country’s reserves on its own in an efficient way.

Pemex is between a rock and a hard place. It is the world’s most indebted oil company and under the current government its debt has been downgraded to junk by various rating companies including Fitch and Moody’s. It is evident that the strategy of rescuing Pemex is not working and I think that the government should redirect its strategy as soon as possible.

Mexico has abundant oil and gas reserves, but exploration and development activities are costly and have a high degree of risk making it difficult for Pemex to carry out these operations on its own. Instead, the government should share these financial risks with the private sector to strengthen the energy sector in the short and long term.

NGI: In the previous administration, there was a lot of interest in the international energy market to invest and seek projects in Mexico. Do you think that Mexico is now less attractive as an investment destination in the global energy market?

Medina: The president’s morning announcements and frequent attacks on specific companies and the private sector in general are already having consequences, causing the perception of the country to shift from being an attractive investment destination to a destination with rising political risk. Additionally, the global economic situation exacerbates this risk.

However, I am an optimistic person and I think that at the end of the day Mexico is fortunate to have enormous competitive advantages and will continue to be an attractive destination for international energy companies with long-term strategies and vision.

NGI: Where do you see the best opportunities currently in the Mexican energy sector?

Medina: Since the opening of the Mexican energy sector is relatively recent and Mexico has a growing demand for electricity and fuels, there are many opportunities for the development of projects throughout the energy value chain to satisfy the country’s growing energy needs. Although this administration definitely poses significant challenges to take advantage of these opportunities.

There is a need to expand oil and gas storage infrastructure across the country given the country’s large market for both refined products and natural gas, as well as energy security needs creating an investment opportunity. Additionally, Mexico’s favorable geographic location and logistics are opening new opportunities for liquefied natural gas projects which consist of importing cheap gas from the U.S. and exporting it from Mexico to demand centers in Central America and Asia.

In terms of upstream, there are wide unconventional and deep-water prospective resources that have yet to be explored or developed and present an important investment opportunity as well. Given that these type of operations are not Pemex’s core as the state company is more focused in the development of onshore fields, it would be ideal for the state-oil company to carry out farmouts to benefit from the know-how and technological transfers from international companies that have wide experience doing offshore projects in other countries and could apply best industry practices.

Under the president´s nationalistic approach, companies participating in Mexico’s energy sector should consider a high degree of political risk when they decide to invest in Mexico at this moment in time. Nevertheless, given the priority that this government is giving to state owned entities Pemex and CFE, private projects are likely to require a higher degree of integration with both state entities.