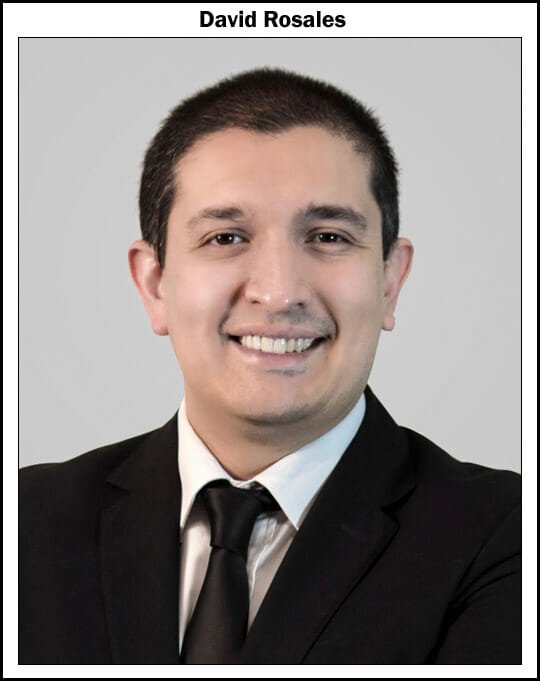 This fifth Q&A in the series is with David Rosales, who has worked in the Mexican energy sector for 15 years. In March, Rosales joined Talanza Energy Consulting, where he oversees midstream and downstream fuels and is responsible for business development solutions, regulatory compliance and feasibility analysis for natural gas and liquids projects. Previously, he worked at the Ministry of Energy (Sener), PetrÃ³leos Mexicanos (Pemex), Banobras and the Energy Regulatory Commission, CRE. As Director General of Natural Gas and Petrochemicals at the Energy Ministry, Rosales was responsible for implementing market development, storage and the five-year plan for Sistrangas. He also worked previously as a regulation and permit manager at Sempra Energy’s Mexico unit, Ienova.

NGI: What is your perspective on the development of the Mexican natural gas market in recent years?

Rosales: I feel like the opening of the natural gas market started well, though recently we’ve seen challenges to maintain that growth. [System operator] Cenagas is having some difficulty operating in several areas of the country. Natural gas shortages which we saw last year have been a major challenge. Cenagas still has several areas to improve in terms of procedures, staff, imbalances, and terms and conditions. It’s a gigantic challenge to establish yourself as an operator and transporter, as well as a national supervisor of several hundreds of contracts with other parties. Where Cenagas doesn’t participate, there have been advances.

In many ways, the establishment of regulation continues to be a challenge for several participants in the market. There is still a lot of learning to be done in terms of how to operate a natural gas market, how to design contracts for the molecule, and how to develop transportation to moderate imbalances in the system. This is necessary to have a more robust, modern and dynamic market.

NGI: What else does Cenagas need to do to advance development in the natural gas market?

Rosales: Bruno Moreno, who took Eduardo Prud’homme’s place in Cenagas, has extensive experience in natural gas and worked for several years in Pemex. He has an advanced understanding of project development and tariffs. He has a lot to add to the team at Cenagas, I think, and that is a great asset for them. The challenge that he and Cenagas have is to evaluate how to make Cenagas a broader administrator and agent.

The fourth revision of the five-year plan will evaluate several pipelines, including the six or seven that are currently stalled. Those are the first projects that should be addressed by Cenagas. I see this as a large risk at this point given that Cenagas hasn’t completed its current transition stage, which has meant a lot of internal turnover, with new people that might not have the same expertise as those that left. Cenagas has an enormous challenge ahead of it.

NGI: A lot of people in the sector say that the short-term priority for the Mexican natural gas industry should be to resolve the issues with the stalled pipelines. Do you agree?

Rosales: For me, the top priority is for Pemex to improve natural gas production. In addition to that, Pemex needs to give us more certainty about their supply in terms of natural gas. I don’t have the slightest idea how much natural gas Pemex is injecting into the pipeline systems. That represents the only solution for the YucatÃ¡n peninsula to have better electricity conditions, for the petrochemical industry in the southeast and to reactivate the conditions in the south of Veracruz.

The second priority, after improved production for Pemex, is to finish the pipelines currently stalled. The most important is the marine pipeline. According to the new director of CFEnergÃ­a, it is scheduled to be completed on July 1. That is very late. That means it won’t be ready for the hottest season of the year in which electricity demand is at its highest. That is a huge challenge.

I understand that the Compression Station at Cempoala is ready.

The next priority is for the other CFE pipelines to be completed to allow for the future consumption of natural gas in new projects because, if not, it will slow economic growth. We have been analyzing the correlation between access to natural gas and gross domestic product (GDP). It is evident. GDP grows when you have access to natural gas.

NGI: In recent weeks we have seen a few blackouts in the YucatÃ¡n, where natural gas supply is scarce or limited. Do you foresee more blackouts in certain regions of Mexico?

Rosales: There’s a huge risk there. Blackouts can happen in YucatÃ¡n as well as other parts of the country. Without being able to import the right amounts of natural gas, for the YucatÃ¡n’s electricity system to function despite the limited access to natural gas, it depends enormously on just a few transmission lines. When those fail, there are blackouts. Even when the transmission lines don’t fail, there are moments of intense heat when air conditioners generate such a high amount of electricity, that there isn’t enough energy available to meet demand.

So yes, there are risks of blackouts both in the YucatÃ¡n and other parts of the country if the supply of natural gas is limited, particularly during seasons of peak heat.

NGI: Natural gas prices at Waha in West Texas were negative for a while recently. What type of opportunity does that present for Mexico given its proximity to such cheap natural gas?

Rosales: The natural gas pipeline network developed in northern Mexico is very favorable to take advantage of these low prices. Some consumption points and interconnections aren’t ready yet, but when they are you’ll have the possibility to send gas all the way to Guadalajara at tremendously low prices.

For me, the biggest opportunity is the development of new points of natural gas consumption and new points of investment. In the country, there is urgency for new investment and new capital. I think there is an opportunity for new large-scale projects, such as the Modelo plant in Zacatecas or the Nissan plant in Aguascalientes. Those projects are great opportunities.

Eventually, I think we will see natural gas liquefaction projects to export liquefied natural gas to Asia. I think there is a good possibility that someone will take on that project at some point.

At the same time, I think that the area of Chihuahua is very, very well positioned to take advantage of low natural gas prices in the U.S. They will have new pipelines online soon and it is an area with limited social problems. Chihuahua is going to be able to create new manufacturing and industrial plants with access to low natural gas prices. At this point, there are U.S. companies interested and willing to broker long-term deals, particularly in the north and in the Chihuahua area.

NGI: If you are a private company and you want to buy and sell natural gas in Mexico, is it difficult to do so given that Pemex and CFE continue to be so dominant?

Rosales: Yes, to be a marketer or trader is complicated, though I don’t see it as being dead. If you are a big trader such as BP plc, there are opportunities, and we’ve seen that they’ve been able to be successful.

Those that are selling natural gas at points that don’t have to deal with Cenagas, I think they will grow and continue growing. If Cenagas isn’t involved, there is less risk of interference or obstacles from a federal level.

I think the market is developing and will become more efficient. It isn’t where we thought it would be, but we are seeing sufficient development in terms of selling and buying.

NGI: Do you see opportunities for Mexico to create a trading hub for natural gas at some point, and if so, where are the most important sites?

Rosales: I do see this as a real opportunity at some point. It will require strategy by the CRE to assist with the process.

The principal area is Monterrey. There is a large amount of capacity that comes in and out and a very large amount of local consumption. Eventually, there could also be a hub in the center of the country, known as BajÃ­o. Or El Encino or Guadalajara. When? When there are many more participants in the market.

Regarding BajÃ­o, the hub could be from where the Los Ramones pipeline enters its final delivery point. You would receive natural gas from the Fermaca pipeline that runs from Aguascalientes to Villa de Reyes, as well as what is provided by Cenagas. There could be an interesting point there to do transactions at attractive natural gas prices.

Another option would be Tuxpan-Tula. It’s a big area and I can’t think of a concrete point for a hub, but a hub there would certainly help prices find equilibrium.

Guadalajara and El Encino are also possible points for hubs. They aren’t there yet, but if development continues, they could have adequate conditions to be hub locations in a few years.

The one that we should have already done, which will require some more patience, is Monterrey. Monterrey has entry and exit points, though it still needs to improve measurement conditions because there are several points where Pemex didn’t establish a measurement system when they were in charge of the national pipeline system. There is a lot of volume being transferred there, so better real-time measurement is required.

NGI: What else could Mexico do to establish an open market for natural gas and what challenges and limitations are there currently?

There are several fields that Pemex has had for a long-time that aren’t competitive because they have a production price of $5/MMBtu. Given the current price environment in the Permian Basin, there are less incentives to develop. Conditions have to be created to encourage domestic participation in the production of natural gas so that there will be more competition and less reliance on the U.S.

On the transportation side, the stalled pipelines need to be finished. They also need to deregulate prices in the southern zone of Mexico and the YucatÃ¡n peninsula. Pemex doesn’t have a regulated price, but since they are the only ones that can provide natural gas to the peninsula, they set the price, which they haven’t wanted to increase.