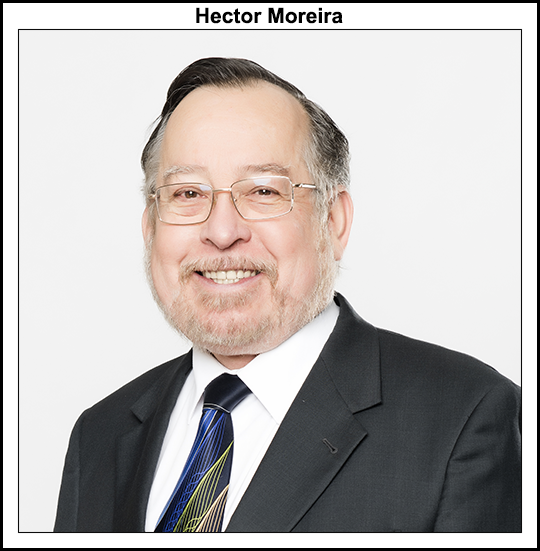 This third Q&A in the series is with Dr. Héctor Moreira. Moreira is a commissioner at the upstream regulator National Hydrocarbons Commission (CNH) and will hold the position through 2024. Having worked for more than 15 years in Mexico’s energy industry, he was the Deputy Secretary of Energy Planning and Technological Development at the country’s Energy Ministry (Sener) in 2003-2004, and later the Deputy Secretary of Hydrocarbons at the ministry from 2004-2006. From 2009-2015, he served as a professional advisor to the board of administrators at Petróleos Mexicanos (Pemex) and to the board of the company’s Exploration and Production division, known as PEP. He studied Chemical Sciences and Chemical Engineering at the Instituto Tecnológico de Estudios Superiores de Monterrey in Mexico and holds a Ph.D. from Georgetown University in Washington D.C.

NGI: How do you think the natural gas market is evolving in Mexico?

Moreira: Mexico is a nation that depends on fossil fuels for 87% of its energy needs. With new combined cycle plants, the demand for natural gas is growing much faster than oil. In the year 2000, Mexico began to import natural gas from the U.S. Imports grow each year. Currently — depending on how you measure it – we are importing around 80% of the country’s natural gas needs.

Currently, hydroelectricity represents about 10% of the energy grid. Hydroelectricity doesn’t have a lot of growth potential. There is some room for growth, but Mexico isn’t Brazil or Norway. Thus, Mexico needs natural gas. Currently, more than half of the country’s electricity is generated with natural gas.

The unconventional gas is principally in the northeast, in the states of Coahuila, Nuevo León, Tamaulipas and Veracruz. We have spoken with many experts, prepared documents, studies and presentations to explain the benefits of unconventional development. I think it is a labor of chipping away and continuing to discuss the topic and providing more information to the public. We have been to the Congress and the Senate to discuss it.

It’s similar to nuclear power development. It receives bad press and is viewed negatively, but it is not as unsafe as it is perceived to be. In the eyes of the public, shale development is considered dangerous, even though the truth is that is it isn’t.

NGI: You mentioned that Mexico imports 80% of its natural gas needs, do you think that amount will continue to grow?

Moreira: There aren’t that many other options currently. Eventually, the option of renewables will be there for electricity generation, but not any time soon. Even with the very fast development of renewable options, it wouldn’t match the increasing demand for electricity. Either we go big on renewables, or we continue to import more natural gas. We don’t have many options as a nation.

NGI: In its auctions, Mexico awarded several contracts for onshore, conventional development of natural gas fields. How have these areas advanced?

Moreira: They are going well. It’s not easy to start-up hydrocarbons development. Once you receive an area, you have to explore. That can take two years. Afterwards, there is drilling, delimitations and then production. All the companies are currently on time. They’re finishing their exploration plans and some are presenting development plans. But, we need to award more areas. We need to open up many more areas for development. That was the plan for rounds 3.2 and 3.3, the bidding rounds for natural gas that were suspended.

NGI: Will those bidding rounds be carried out?

Moreira: They haven’t been canceled, they have been postponed. Originally, it was said they would be postponed for three years, and then it was two years and now they are starting to say that they will only be postponed six months. We really don’t know exactly at this point what the Energy Ministry will do. We don’t know how long they will postpone the rounds or what is needed to accelerate the rounds. Given that the Energy Ministry sets energy policy for the country, we have to do what they decide.

NGI: Is there a forecast for the amount of natural gas that the fields under development will produce?

Moreira: There is a production forecast and a timeline for how much natural gas will be produced by a certain date, though I would say that we can’t expect anything for the next two years. The contracts were just awarded, and many of these companies haven’t completed their exploration plans. As I said before, there aren’t enough areas awarded, and the ones that have been awarded aren’t producing.

NGI: In terms of the priorities for the country and to advance the natural gas market, what can Mexico do in the short-term?

Moreira: If you want industrial development in states such as Guerrero, or Nayarit, or Oaxaca, if there isn’t gas, industry can’t be developed. So, the first step should be the development of a network of natural gas pipelines that exists in all of the country. Because currently there aren’t pipelines that connect to all the states of the country. There are several states that don’t have access to natural gas, so their economic growth opportunities are limited. That increases the cost of electricity, which affects business development.

NGI: What is the process for buying and selling natural gas in Mexico?

Moreira: The development of the Permian basin means that there will be gas in Mexico. I don’t see any supply problems or that the U.S. would put any limitations on the amount of natural gas they send to Mexico. But what we don’t currently have is a very agile system of buying and selling natural gas. There aren’t sufficient pipelines to give flexibility to the market. That creates limitations to a more open market for natural gas. There aren’t hubs yet, for example. There could be hubs in Mexico. It would be logical to have one in Monterrey. It is in the northeast, it is a large consumer and large importer of natural gas. But there still isn’t a set natural gas price in Monterrey. The first step would be more infrastructure and the second would be to create a more agile, daily market for natural gas. More pipelines are needed and, if those are in place, there could be more long-term contracts.

It’s important to remember that originally Pemex managed all of the natural gas in the country. Afterwards, CFE started to import its own gas. That meant that the two state-owned companies moved the natural gas. While that is no longer the case, they are still the major players in the market. There are other competitors, Gas Natural Fenosa for example, but they still aren’t able to compete on the same level with the dominant players.

NGI: Looking into the future, do you think there will eventually be more competition in Mexico’s natural gas market?

Moreira: Yes, I do think there will be more competition. At some point, I think national natural gas production will grow and that will create new areas of production in Mexico. At the same time, I am a believer that we are seeing an energy transition that is a little different than perceived. I think that, in the next 20 years, as we begin to see more electric cars, the question is: Who is going to generate electricity? We return to natural gas. A society that uses electric cars is going to need more natural gas. We need to prepare ourselves for more gas. So, in Mexico, natural gas should be a priority.

NGI: the previous administration, there were several auctions for pipelines. Do you think more auctions could be announced at any point?

Moreira: I think there will be, though we continue to be in a period of transition. This is a new government and they are still sorting out what they will accept from the previous government and what they won’t. So far, the new administration is yet to present the National Development Plan. The policies for the next six years still aren’t defined in black and white. There have been a lot of things announced, but, on paper, there still hasn’t been a plan presented. The National Development Plan has to be presented by May 1, so we’ll see what it says.

NGI: What types of contracts are currently being used for the buying and selling of natural gas? Are they daily, monthly, annually?

Moreira: There’s a combination of them all. What we don’t have are sufficient options that allow you to buy from option A, B or C. That doesn’t exist yet. And that brings us back to the problem of the lack of infrastructure. If there’s only one provider, it’s difficult to negotiate a price with them. If there is only one option for supply, that means the price is defined by the Energy Regulatory Commission (CRE). The CRE operates when there isn’t competition. That doesn’t make for a very flexible market. At the same time, you don’t want the natural monopoly company to set the price either.

NGI: You mentioned that Monterrey could be a potential location for a natural gas hub. Are there other locations that could also be possible hubs?

Moreira: One would be in the south, where the natural gas is shipped from the Gulf of Mexico and the area of Cantarell. In theory, it could come from the north in the U.S. down to the south of Mexico and be exported to Central America. But, there’s no pipeline, so, without that, it’s not something that can really be considered at this time.

NGI: One topic that has circulated in recent weeks is the possibility of natural gas shortages. Do you see that as a real concern?

Moreira: When you have a period where there is excess demand, such as in a heat wave, the supply of gas isn’t sufficient. It’s not that there isn’t natural gas, it’s that the pipeline capacity isn’t sufficient. So, the solution is then the purchase of LNG. But that is not something you can do from one day to the next. In some cases, there has been restricted consumption where a usage limit is set for the amount of electricity that can be consumed. That has happened before. There are solutions, and one is to create more storage for natural gas. The Energy Ministry has said in the past that more storage must be made available to provide up to a week’s worth of demand to avoid such issues. But that has happened yet. If consumption is increasing, there needs to be sufficient storage to avoid what is known as a “critical alert.” This continues to be a potential risk while we don’t have the adequate infrastructure in place to meet increasing demand.

Fortunately, the Permian basin is producing enough natural gas to provide Mexico with sufficient supply. There is the possibility to create another pipeline that connects with Chihuahua from the Permian basin, but again, that is yet to be done.

NGI: What are the current challenges for the CNH during this time of transition with the new administration?

Moreira: We awarded more than 100 upstream contracts but the challenge is making sure they are executed. That is 100 exploration plans, 100 production plans, and making sure they are completed as planned. We have found that this can be tricky. Development plans can change if things occur that weren’t expected, so then they have to be updated.

Another challenge is the question of the bidding rounds and to be prepared to hold them immediately in the event they are reactivated.