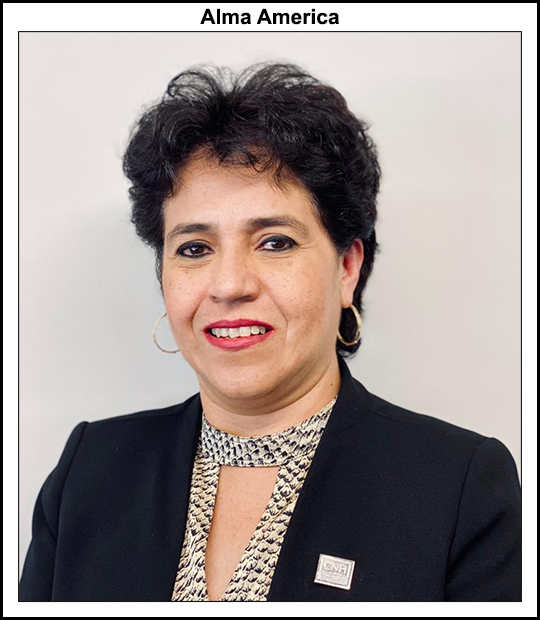 This 29th Q&A in the series is with Dr. Alma América Porres Luna, Commissioner at Mexico’s National Hydrocarbons Commission (CNH) since 2010. Porres Luna was the head of the Technical Exploration Unit at CNH from 2015-2016 and is set to be a commissioner at the regulatory body through Dec. 2022.

Prior to her work at the CNH, Porres Luna worked as an applied geophysicist at the Mexican Institute of Petroleum (IMP) for 26 years as an expert in geologic characterization and petrophysics and in the evaluation of Mexico’s hydrocarbon resources and reserves. She was the Director of Exploration and Production at the IMP, where she worked on the development of new technologies, products and services for Pemex.

Porres Luna is a geophysical engineer and received a doctorate and master’s degree in applied geophysics at the University of Bordeaux in France. She is a faculty member in the engineering department at the Universidad Autónoma de México.

NGI: Given the current uncertainty in the Mexican and global energy markets, how do you think the Mexican energy market will be affected by the collapses in oil and natural gas markets due to the coronavirus?

Porres Luna: The coronavirus has generated a slowdown in the majority of economic activities, and at this moment, it is not easy to evaluate the real impact in the global economy. However, in the oil and gas industry, the effect was quick and severe, with a dramatic fall in demand and precipitous price drop. As a result, various majors have reduced their investments and adjusted to a new lower-price scenario.

This scenario has led to international efforts to control the oil output in the market. Examples are the measures that OPEC++ took to stabilize oil prices, including those that Mexico agreed to. This agreement will need to be evaluated as the crisis continues so that we can see how effective they might be.

In Mexico, it can be expected that companies will cut cash flows and limit investment in exploration and production activities. The changes in the planned activities will require the approval of the CNH. I’m convinced that the companies will be more cost-efficient for this period and plan their activities thinking in the long term. In this current scenario, there is an incentive to develop projects jointly and use farm-outs or joint ventures to do so.

The magnitude of what is happening right now is incomparable; however, if we look to the past, we can find great examples when the oil and gas industry adapted to setbacks. From 2013 to 2016, U.S. shale producers increased production from 3.05 million daily barrels to 4.43 million daily barrels, an increase of 45%, while WTI crude prices fell from $98/barrel to $41/barrel.

NGI: If you had to describe the Mexican natural gas market with a single word, what would it be and why?

Porres Luna: Priority, and to be more specific, a national priority.

Natural gas is the most critical fuel for the generation of the country’s electricity, around 54% is generated from natural gas, and 70% of domestic consumption (including Pemex’s consumption) comes from imports, originating almost entirely from the U.S.

Currently, a large percentage of Mexico’s natural gas production is limited to associated gas from mature fields, and the total output volume from gas fields continues to decline. There are some exceptions, such as the Ixachi field, that help to counter the production declines, but they are insufficient to offset overall output losses.

Mexico has important natural gas resources that have not been developed and that could strengthen the growth of the sector. Most of these resources are distributed in deepwater, in unconventional plays and mature fields, this distribution allows the country to have different project portfolios and adapt to different price scenarios.

In terms of infrastructure, Mexico has eight petrochemical complexes around the country, whose production has fallen more than 50% since 2009. That means that its productive infrastructure continues to be underutilized.

NGI: What is your opinion on the current state of the Mexican natural gas industry and where do you see opportunities for growth?

Porres Luna: The national gas market is very integrated with the U.S. This integration has a positive aspect and provides Mexico access to the cheapest natural gas in the world; however, it makes us reliant on an external supply for a key fuel.

To lower any supply risk, it would be essential to strengthen the national natural gas market by taking advantage of the reserves and prospective national resources, particularly from economically-viable projects; building strategic natural gas storage capacity; and applying enhanced recovery methods to current natural gas production.

Porres Luna: Due to the proximity to the U.S. and the ease of importing gas through pipelines (making the import costs “low”), there is little incentive to produce natural gas in Mexico. However, to ensure Mexico’s energy security, it is a priority to have a national shelter and be protected from risks.

Mexico holds significant natural gas resources, in addition to those that I already mentioned, and it is necessary to build the infrastructure required for its optimal production, transportation, and storage. Mexico should plan for the long term so that the country can carry out efficient production of natural gas and have the infrastructure available that is needed to take advantage of these resources.

NGI: In your opinion, what does the Mexican natural gas industry need to strengthen and fortify its position in the global market?

Porres Luna: Mexico needs to develop opportunities on a national level to increase national production. The country also needs to create local industries by type of resource and location, including the consideration of fiscal stimulus for the development of this industry, as has been done in other countries. This would allow operators that have a lot of experience in efficient production of these resources, to transmit their knowledge and expertise.

NGI: The amount of prospective resources that Mexico has in some of its basins, such as the Burgos and the Sabinas basin, are thought to be considerable. Do you think it would be an error for Mexico not to develop unconventional oil and gas resources using hydraulic fracturing or fracking?

Porres Luna: The unconventional resources in Mexico could be developed to boost economic development in the northern region of the country. Still, we must assure that it can be done in a way that is responsible towards the environment and local communities. The potential resources must be evaluated to see if they are economically viable and can be developed over the mid- and long-term.

However, many of the operators that are currently carrying out exploration activities within different areas are developing very valuable knowledge of what is underneath the surface, and they are discovering new fields that they hope to develop. Some of the fields that have been assigned or are under contract have extraction rights along the geological column and could generate more value if allowed to develop unconventional resources, which could be an opportunity to strengthen the case for more fracking activity.

In order to further the case for hydraulic fracturing, Mexico must build the infrastructure associated with the development of these types of projects so that they can be considered as an option.

NGI: Are there any current projects – or projects being considered – that would improve the development of the Mexican natural gas market?

Porres Luna: Among Pemex’s strategic projects is Ixachi, a very important gas and condensate field that could boost the supply of gas in southern Mexico. In addition, the Energy Ministry and Cenagas are considering natural gas strategic storage options in different areas of the country.

Also, since June 2019, Mexico began receiving natural gas from the marine pipeline, which as of December, had already added 650 MMcf/d to the country’s supply.