Higher commodity prices have whetted investors’ appetite for more natural gas and oil deals, and the pace of activity should pick up for the rest of this year, PwC predicted in a recent midyear report. 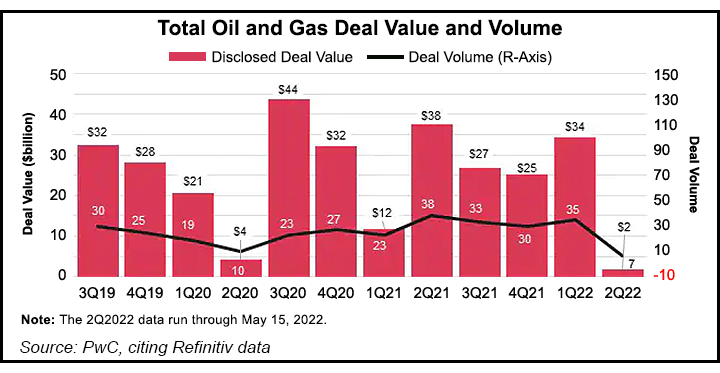 A separate tally by Enverus found that private equity drove about 80% of U.S. upstream deals, heavily weighted toward the Permian Basin, during 2Q2022.

Through mid-May, a total of 123 oil and gas deals valued at $107 billion had taken place within the last 12 months (LTM), PwC reported last month.

In contrast, 98 deals – 25% fewer year/year – worth a “similar” value took place during the previous LTM period, the consultancy said.

“Upstream deals accounted for most of the transactions so far this year,” researchers said.

They also noted that private companies are deploying capital more rapidly toward expanding drilling programs than their publicly held peers, with the latter staying focused on shareholder returns.

Citing the Permian Basin “megadeal” between Centennial Resource Development Inc. and Colgate Energy Partners III LLC as a harbinger, PwC predicted that the upstream would continue to figure prominently in an accelerating oil and gas dealmaking landscape during the second half.

To be sure, PwC said that higher commodity prices “may curtail corporate deals as companies retain assets. However, private players looking to capitalize on higher prices may boost production with acquisitions as internal drilling programs are hampered by a lack of materials and labor shortages.”

Thanks to continued strong demand for long-term U.S. LNG export contracts from Asia and European countries seeking alternatives to Russian supplies, natural gas should gain attention from dealmakers in the year ahead, said PwC.

Because joint ventures own most U.S. liquefied natural gas supplies, however, the consultancy said that acquisitions would be harder to achieve.
“As a result, we expect more investment deals than” merger and acquisition transactions in the second half of this year,” researchers said.

Also, because liquefied natural gas terminals and infrastructure demand billions of dollars in investment with a payout that can exceed five years, PwC issued a word of caution.

“Investors may be wary of the uncertainty of such long-term horizons and issues related to expanding capacity too rapidly,” researchers said.

PwC noted that elevated interest in LNG and other deals tied to oil and gas production are “muting the emphasis on renewable energy” – but not prompting an actual drop in investments tied to achieving environmental, social, and governance goals.

“At the same time, investments in renewables, carbon capture and storage as well as other ‘green’ assets continue to grow,” said Akunuri.