Penn Virginia Corp. (PVA) said it expects delays in its drilling program in 2H2014, and it expects those delays to have a slight impact on production, expected earnings and capital expenditures (capex) for the remainder of the year. 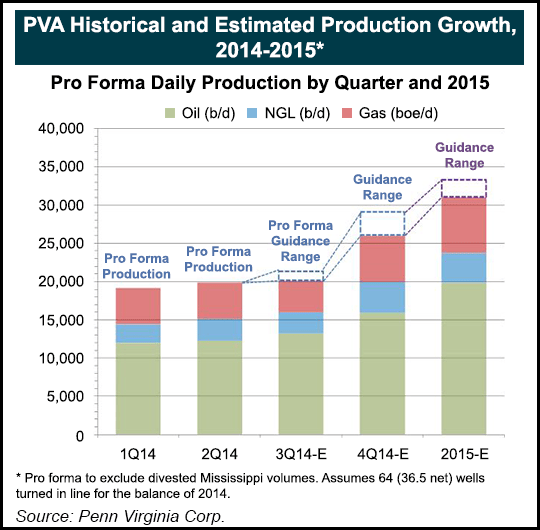 “Although well results continue to meet or exceed expectations, we anticipate delays in the timing of completions associated with our second half of 2014 drilling program, including those wells to be drilled with the recently added seventh and eighth drilling rigs,” PVA said Monday. “In addition, as a result of the delays, we now expect four (2.5 net) fewer wells will be turned in line in 2014, with those four wells now expected to be turned in line during the first quarter of 2015.”

At the end of July, PVA closed on the sale of its Mississippi assets to an undisclosed buyer for gross cash proceeds of approximately $73 million (see Shale Daily,June 2). The assets included horizontal wells targeting the Selma Chalk that had net production of about 11.9 MMcfe/d in 1Q2014, nearly 100% of which was natural gas.

Analysts were surprised by some of the developments and warned that PVA stock could suffer.

“We think the magnitude of the miss…could cause concerns that reduced guidance is driven by more than timing of wells turned to sales…Bottom line, we think reduced guidance supports our view that decline rates are steeper than expected…and given uncertainty around ultimate recoveries and downspacing…, plus high financial leverage, we think a [merger and acquisition] scenario could be challenging.”

“Updated guidance falls below our/consensus estimates as us/Street gave partial credit for PVA’s assertion that about 32,000 boe/d in 4Q2014 was feasible,” the analysts said. “Overall, shares could see weakness heading into PVA’s presentation next week at a competitor’s conference, when Street/investors should get more color on today’s release. Adjusting our model for updated guidance, our 2014 and 2015 [earnings per share] estimates move to -$0.21 and $0.19, [down] from -$0.08 and $0.26, respectively.”