Natural gas prices trimmed about a nickel or so from the forward curve as spring appears to have sprung a couple of weeks early. The April contract was down 6 cents on average for the March 4-10 period, while the summer strip (April-October) was down 4.0 cents, according to NGI’s Forward Look. 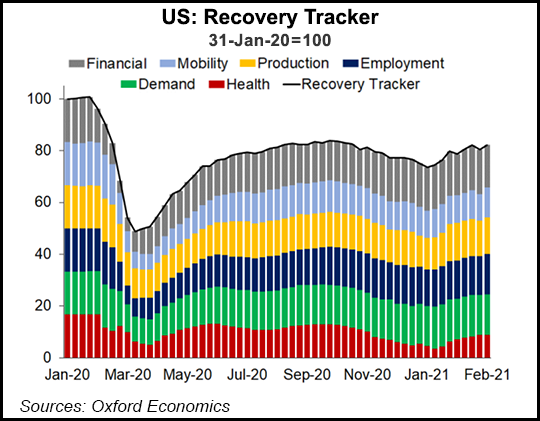 Similar losses were seen further out the curve as the storage picture has improved a bit in recent weeks. An increase in oil prices also is seen as potentially driving some modest increases in associated gas production later this year. The winter 2021-2022 strip fell an average 5.0 cents for the trading period ending Wednesday, while summer 2022 slipped a penny on average, Forward Look data showed.

Only New England points registered any notable deviation from other U.S. markets, and even then, losses were not extraordinary. Algonquin Citygates April prices fell 12.0 cents from May 4-10 to reach $2.858, according to Forward Look. The summer strip was down only 2.0 cents to $2.460 as was the winter 2021-2022 strip, which averaged $5.840.

Technicals continue to point in a bearish direction for benchmark Henry Hub prices, and by extension other U.S. markets, according to EBW Analytics Group. “Closing below $2.68/MMBtu early this week took out key support for the April contract. It would not be surprising to see prices continue to generally trend lower over the next seven to 10 days to test support in the $2.52-2.60 range.”

Overwhelming bearish sentiment in the gas market supports that theory. Near-term weather forecasts have continued to trend milder, with the latest models pointing to a warmer tilt from the Midwest to the Northeast for the final third of the month, according to Bespoke Weather Services. There is a bit of discrepancy between the European and American models, though. Bespoke’s outlook lies somewhere in the middle of the two.

“Longer term, most of the pattern signals continue to show a warmer-than-normal lean toward the end of March and into the month of April, which would be bearish for overall demand, though at a time of year when weather means much less to the market,” the firm said.

Weather aside, fundamentals data also remains weak, according to Bespoke. There has been a small dip in production because of Northeast maintenance, and liquefied natural gas (LNG) volumes are back up closer to 11 Bcf, “which helps some.” However, power burns have been “putrid,” not only in absolute terms with the low demand this week, even when adjusting for weather.

Market observers expecting the latest government storage data to reflect a correction to last week’s jaw-dropping report, and possibly lead to a price bump, were disappointed.

The Energy Information Administration (EIA) on Thursday reported another much lower-than-expected 52 Bcf draw from storage inventories for the week ending March 5. The draw came in lower than the year-ago and five-year average pull, and though well within the range of expectations, it also fell short of the 78 Bcf consensus.

Ahead of the EIA report, a Bloomberg survey showed estimates ranging from draws of 58 Bcf to 104 Bcf, while a Reuters poll showed withdrawal estimates as low as 39 Bcf. NGI’s model predicted a 104 Bcf pull.

Though not as loose as the prior EIA data, the 52 Bcf figure still left some market observers struggling to determine the lingering impacts from February’s crippling winter freeze. Industrials have been slow to recover from the unprecedented storm, and the reduced gas demand from the sector was seen factoring into the last two EIA reports.

“I guess the question now is, ‘how quickly do industrials bounce back?’” asked one participant Thursday on The Desk’s online energy chat Enelyst.

Wood Mackenzie reported this week that most methanol plants have likely been offline over the past month based on natural gas nominations data, but they started coming back over the past week. Two of the largest facilities, Natgasoline LLC and Methanex USA LLC, ramped down in early February. The OCI Partners LP Beaumont plant southeast of Houston shut down during the recent cold snap too. The facilities have only started to ramp back up.

“There are only a handful of methanol plants in the U.S., and they generally receive gas directly from interstate pipelines, because they require huge volumes of gas both as a feedstock and for process heat and electricity generation,” Wood Mackenzie analyst Dan Spangler said.

The selected methanol plants visible through natural gas nominations account for more than 250 MMcf/d of demand, according to Spangler. “Along with refineries and fertilizer manufacturers, methanol plants have been one of the slowest large sources of industrial demand to come back online following the recent freeze.”

Once those facilities are operating at their normal levels, demand could increase beyond levels seen a year ago, when Covid-19 first became part of everyday lexicon.

Broken down by region, the East reported a 33 Bcf withdrawal for the reference week, while the Midwest posted a 25 Bcf draw, according to EIA. Mountain and Pacific inventories fell around 5 Bcf, while the South Central region posted a net 15 Bcf injection. This included a 17 Bcf build in salt facilities and 2 Bcf withdrawal from nonsalts.

Despite the bearish tenor of the past two storage numbers, Huntsville Utilities natural gas supply manager Donnie Sharp said the futures market is pretty oversold. “It may be time for the pie to rise a little.”

While the near-term gas outlook may not be too rosy, some structural shifts in the background bode well for prices later this summer and into the winter.

Notwithstanding the ongoing commissioning of the third production unit at the Corpus Christi terminal and the unplanned outage at Freeport, LNG exports generally are expected to remain strong through the summer. Similar to the industrial sector, this too is in stark contrast to last year, when dozens of U.S. cargoes were canceled as Covid-19 brought global economies to a standstill.

“Broadly speaking, and without any credence given to unplanned outages, daily LNG feed gas demand should remain at or above 10 Bcf/d for the foreseeable future,” said Mobius Risk Group. “Unless there is a notable collapse in either European or Asian market prices for the summer months, the number of ships moving U.S. gas to downstream markets should remain elevated.”

The firm noted that while spot charter rates “went parabolic” in the fall and early winter, shipping rates are “back to normal.” With multi-dollar spreads to both Europe and Asia, “there is little reason to expect a material reduction in LNG feed gas demand in the U.S.”

However, the EIA still expects the LNG sector to experience a seasonal decline in the coming months. In the latest Short-Term Energy Outlook, the agency said it expects LNG exports to average 7.8 Bcf/d from March through May.

Despite the daily ebb and flow of the market, the outlook remains strong for LNG as European storage stocks are tracking low for this time of year and well below the five-year average in a bullish sign for restocking in the months ahead.

Meanwhile, economies in the United States and abroad are slowly starting to normalize as vaccination rollouts have gained momentum. EBW analysts said widespread vaccinations and the re-opening of the economy could spur increasing domestic industrial, commercial and power sector gas demand.

“The month of March may feature as many vaccinations as December-February combined, with the pace accelerating even more in April and May as vaccine shortages are alleviated,” EBW said.

Vaccine delivery “continues to impress,” according to Daco, with more than two million shots being administered daily. The warmer weather, improving health conditions, and stimulus from the American Rescue Plan, signed into law by President Biden on Thursday, should support more travel activity, increased dining out, and small businesses reopening, he said.

Despite the bullish long-term outlook, EBW analysts said most of the upward pressure on prices may still be months away. “Fundamental catalysts and seasonality currently appear much stronger in late spring or early summer as the impact of LNG demand growth becomes increasingly apparent, production weakens slightly and injections fall short of expectations.”