The Puget Sound Clean Air Agency (CAA) essentially gives PSE the final permit it needs to move ahead with the project that it originally proposed in 2014 before running into several permitting hurdles.

In what is mandated by the CAA’s rules as a staff decision, Executive Director Craig Kenworthy said the permit is conditioned, and since the application met all of the CAA’s standards the agency was required to issue the permit. The conditions will require a “demonstration of compliance with emission limits set through this review.”

PSE indicated that the permit will allow it to move forward with the project to turn Canadian gas supplies into LNG for storage and for use by ships, all of which the Bellevue, WA-based combination utility said will help reduce greenhouse gas (GHG) emissions 15% while improving reliability on the coldest days of winter for gas utility customers. The facility is now slated for operations to begin in 2021.

PSE seeks to provide fuel for local transportation companies looking to shift from diesel and other traditional fuel sources to cleaner LNG in various types of natural gas vehicles (NGV), which are expanding in use among fleet operators. An LNG marine transportation fueling depot also is contemplated on some of the privately held land the port does not control in the 5,000-acre industrial area.

The utility project is an offshoot of a larger, multi-billion-dollar effort by Chinese companies to develop substantial methanol production capability for exporting from the Pacific Northwest, but has scaled back plans by dropping the Port of Tacoma as one of three original proposed sites.

PSE senior executives have called the LNG project an “environmental and economic investment” for Tacoma, which they characterize as in the midst of transitioning from a logging/fishing emphasis to more marine transportation.

“Now, we can move forward on a facility that will bring cleaner air to Tacoma, help reduce GHG emissions, and ensure our customers’ homes stay warm on the coldest days of the year,” said PSE spokesperson Andrew Padula, who emphasized large percentage drops in major pollutants such as sulphur dioxide (98%), particulate matter produced by ships (85%), and nitric oxide and nitrogen dioxide (nearly 85%).

Nevertheless, the project has drawn strong opposition from major environmental groups that have designated the project as a “fracked gas facility,” relating it to hydraulic fracturing, which they oppose. Thus, one condition is that all of the facility’s gas supplies come from western Canada.

In late 2015, the Puyallup Tribe of Indians filed a petition in Pierce County Superior Court seeking to prevent the port’s approval of a lease with PSE for the proposed LNG site. Earlier city of Tacoma officials approved an environmental impact statement (EIS) on the project and authorized the city manager to complete an agreement with the port for the proposed facility.

Plans by PSE to develop an LNG storage and transportation facility at the port gained approval of a lease by the port’s governing board. The utility’s plans are part of a larger development slated for a vacant industrial strip in the Tideflats port. 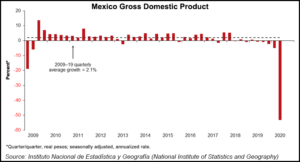