Spiking energy prices and the related across-the-board inflation aren’t being driven by a lack of oil and gas resources. Analysis from the U.S. Energy Information Administration (EIA) found that publicly traded exploration and production (E&P) companies increased proved reserves of oil and natural gas by 19.2 billion boe in 2021. 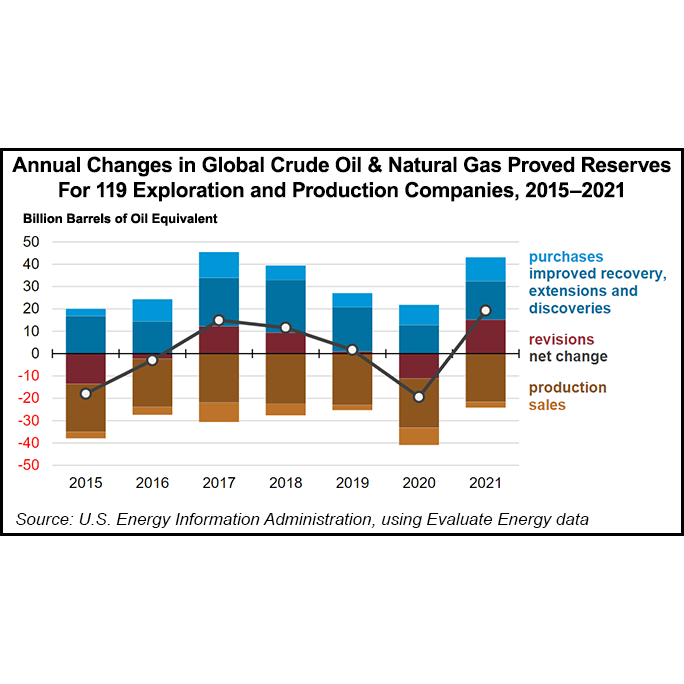 This was based on the financial reports that 119 domestic and international companies provided to the U.S. Securities and Exchange Commission. EIA estimates that the companies accounted for about 60% of total non-OPEC liquid fuels production last year.

The increase came even as companies lowered spending on exploration and development (E&D), EIA said. The 119 companies collectively spent $244 billion on E&D in 2021, 28% less than the pre-pandemic five-year (2015–2019) average.

“A number of factors affect proved reserve levels, some of which depend on the price of crude oil or natural gas,” analysts said. “Other factors are based on company actions, such as sales, acquisitions, and spending on exploration and development.”

Proved reserves are estimated resources that an analysis of geologic and engineering data demonstrates with reasonable certainty are recoverable under existing economic and operating conditions, EIA said.

Amid soaring demand and a war in Europe that has squeezed supply, natural gas prices recently hit 14-year highs. Analysts at Goldman Sachs Group forecast that Brent crude will average $140/bbl between July and September and hover around that level through the first half of next year.

Unlike previous high price cycles, though, E&Ps have kept a lid on increasing production, instead favoring returning cash to shareholders.