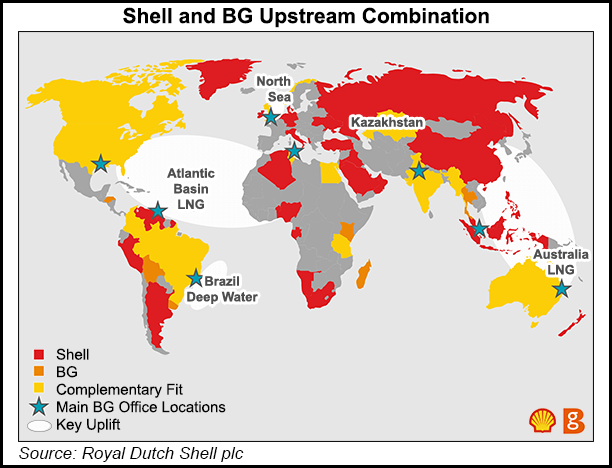 On Tuesday, the European Commission (EC) said an antitrust investigation into the proposed merger determined that Shell would not gain an unfair advantage in several markets — specifically, oil and natural gas exploration, gas liquefaction or wholesale LNG supplies.

“A number of strong competitors would remain active in these markets after the merger,” the EC said, and the combined company “would be unlikely to prevent competitors from accessing some of Shell’s LNG liquefaction facilities used to supply LNG into the European Economic Area or from its natural gas transportation and processing infrastructure in the North Sea.

“This is mainly because significant additional liquefaction capacity is being built and will come on-stream in the near future, while significant spare oil and gas transport and processing capacity exists in the North Sea region.”

The merger would boost Shell’s proved reserves by about 25% and its production by about 20%, based on figures from 2014 (see Daily GPI,April 8).

Shell CEO Ben van Beurden said EC clearance “underlines the good progress we are making on the deal…The recommended combination with BG is a springboard to change Shell into a simpler and more profitable company, making Shell more resilient in a world where oil prices could remain low for some time.”

Shell plans to close the deal in early 2016. With EC approval, the energy giant said it has now met two of the five pre-conditions. Brazil approved the merger on July 24. The remaining pre-conditions are for clearances from China and Australia. The deal received early antitrust clearance in June from the U.S. Federal Trade Commission.