Bear Head LNG is proposing a 1,600-kilometer (1,000-mile) pipeline to bring Western Canadian natural gas to the Maritimes for transformation into liquefied natural gas (LNG) that would make the short ocean hop to European markets. Management is optimistic about the project, but some experts question whether it is feasible, considering the outlook for natural gas prices. 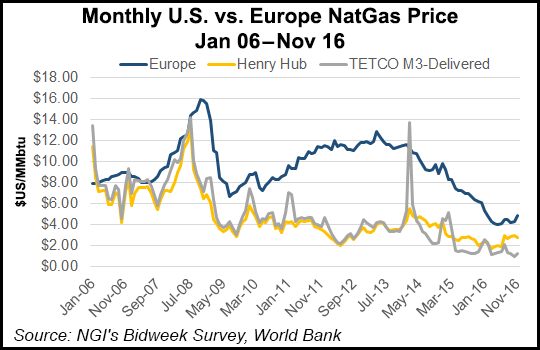 The pipeline would run from North Bay, ON, to Saint John, NB, running parallel to the proposed (stalled) Energy East Pipeline. From there, the gas would travel in an expanded Maritimes & Northeast pipeline to Goldboro in Nova Scotia and then to Point Tupper, NS, where it would be liquefied and shipped to Europe from the C$5 billion liquefaction plant Bear Head LNG is proposing to build.

“Western basin gas producers originally intended to ship to the British Columbia coast through pipelines, but that opportunity is evaporating,” said Bear Head’s Paul MacLean, strategic and regulatory affairs adviser, last week. By building a pipeline to the East Coast, “western producers would benefit from gaining access to markets across Canada and around the world.”

The 42-inch-diameter pipeline proposed by Bear Head would actually be built by TransCanada Corp., which operates an extensive pipeline system in Western Canada that collects gas from producers and carries it into Ontario and the United States.

But TransCanada isn’t talking publicly about the proposal. “Our company policy is not to speak to market rumours or speculation,” TransCanada spokesman Mark Cooper said last week. “We remain focused on opportunities that would be in line with our strategy that grow shareholder value.”

There are several proposed mega-projects — both pipelines and LNG export terminals — that would carry North America’s relatively cheap natural gas on the Atlantic toward Europe. All would require billions of investment dollars. Bear Head LNG is one of two eastern projects to have made it through the initial stages, gaining authority from the U.S. Department of Energy to import and export U.S.-sourced natural gas worldwide. Canada’s National Energy Board has chipped in with an LNG export approval. Bear Head would import up to 800 MMcf/d from the U.S. and export up to8 million metric tons/year (mta) of LNG.

“The field of dreams is littered with broken projects,” said AltaCorp Capital Inc. managing director Dirk Lever, who is based in Calgary. “With the tolls involved in a very old pipeline, it still makes it difficult for guys in Calgary to send gas to Toronto and make money…” Bear Head’s proposal is “a huge distance. That’s a huge cost.”

So the question that determines whether Bear Head’s proposal is only another pipe dream is, of course, whether it would be profitable enough. “If we were going to go into the market and sell LNG today, there is no question that we would be underwater,” MacLean said.

From a high of $12.88/MMBtu for natural gas in April 2013, the going rate in Europe has dropped steadily to $4.29/MMBtu as of Oct. 31. Because of a shortage of pipeline capacity to bring Marcellus Shale gas north, Bear Head is looking to bring British Columbia’s Horn River and Montney gas east. With gas trading at around $2.80/MMbtu in Calgary, pipeline and liquefaction tolling costs are the project’s potential Achilles heel. Bear Head is not giving an estimate on the cost of the new pipeline.

However, Enbridge is projecting its 1,660 kilometer Line 3 project, which would expand capacity between Hardistry, AB and Superior, WI, may cost C$7.5 billion.

Alberta and British Columbia gas would have to first travel all the way to Ontario, then through the new proposed pipeline, paying tolls all the way, before it is cooled and shipped.

“The producers and the provinces are all for it, but the economics don’t work,” said Lever. “If the guys in BC can’t get it to work and have a short distance to go, what makes someone think you can build a pipeline and a liquefaction plant on the opposite side of the country and make it work?”

That’s a question Bear Head’s proponents probably have to answer regularly. Their answer is two-fold.

Bear Head has to get LNG on the water for a similar cost — though management won’t say what that is — to Gulf Coast exporters. “Let’s say a forward expectation is $4/MMBtu for Henry Hub and $3 liquefaction costs on the Gulf Coast,” said Atha. “We can be competitive with that.”

Bear Head’s big selling point is that once the gas makes it to Nova Scotia, it’s only five and a half days’ sailing time to Europe â€” with an estimated shipping cost of 47 cents/MMBtu.

Either way, the plan isn’t feasible at current prices in Europe.

With liquefaction capacity coming online on the Gulf Coast and Qatar expanding its shipments into the European market, analysts are predicting the price in Europe to go down before it goes up to the highs seen around 2012 when Bear Head’s plan was first hatched.

“We’re predicting around 2022,” said MacLean of when the management expects gas prices to start going back up in Europe. In the meantime, the company has required permitting to build the LNG plant in Nova Scotia. What it doesn’t yet have are contracts for both gas supply and buyers. The permitting process for the proposed pipeline also has not begun.

Lever remains skeptical. “Look, maybe they’ve run the numbers and see something that we haven’t,” he said of Bear Head. “But this is a big-boy game. Talk is cheap in that industry.”

Aaron Beswick is an NGI correspondent. A version of this article originally appeared in the Local XPress, which covers news in and around Nova Scotia.