The recent proliferation of local government proposals to curb or ban oil/natural gas activity, including hydraulic fracturing (fracking), is not immediately ringing any alarm bells in the newly relocated Houston executive offices of Occidental Petroleum Corp. (Oxy) as it works to spin off its multi-billion-dollar California operations into a separate company. 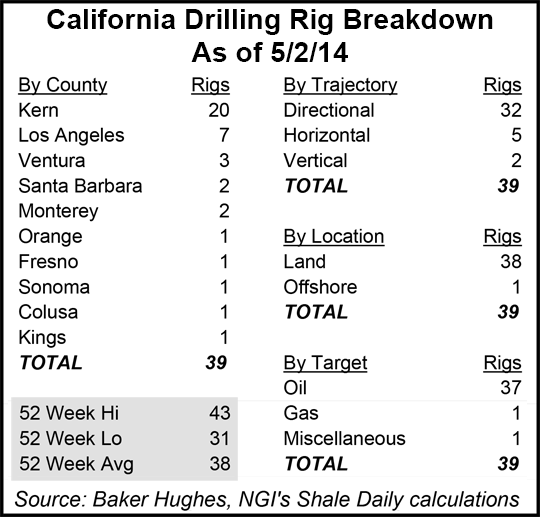 “We have lots of acreage in California, and there are lots of counties and towns who would like us there and want the jobs (see Daily GPI, May 2), [unlike] some of these places that don’t want us and have very high unemployment.”

Chazen said the areas involved (Beverly Hills, Compton and the City of Los Angeles, etc.) are not significant parts of Oxy’s acreage holdings in the state. He thinks the anti-fracking sentiment is being “stirred up” by individuals and groups that oppose oil/gas activity generally.

“These are people that don’t like oil and gas, so when the California company [spinoff California Resources Corp.] is up and running, a major focus will be to deal with the political issues in California.”

Some of newly constituted bans, such as the one in Beverly Hills, are in a relatively small production area where Oxy has no intention of using fracking, Chazen said. “This is a case of politicians trying to make some sort of statement, or the people in Beverly Hills who want to park their Rolls Royces and ride bicycles going forward.”

As an aside, Chazen told the analysts: “You can see why I am not going to be part of the new California company.” Until recently, Oxy was headquartered in Los Angeles.

Currently, 37 of the 39 drilling rigs working in California are either directional or horizontal, and 37 are targeting oil, according to Baker Hughes data. Roughly half the rigs drilling in California are in Kern County, with another seven in Los Angeles County. No other county in the state has more than three working drilling rigs at present. The overall California rig count has been fairly steady over the last twelve months, ranging from a low of 31 to a high of 43, with an average 38 rigs during the period.