The Department of the Interior (DOI) unveiled a proposed rule on Monday to curb methane pollution from oil and gas operations on federal and tribal lands, in part by imposing royalties on vented or flared natural gas. 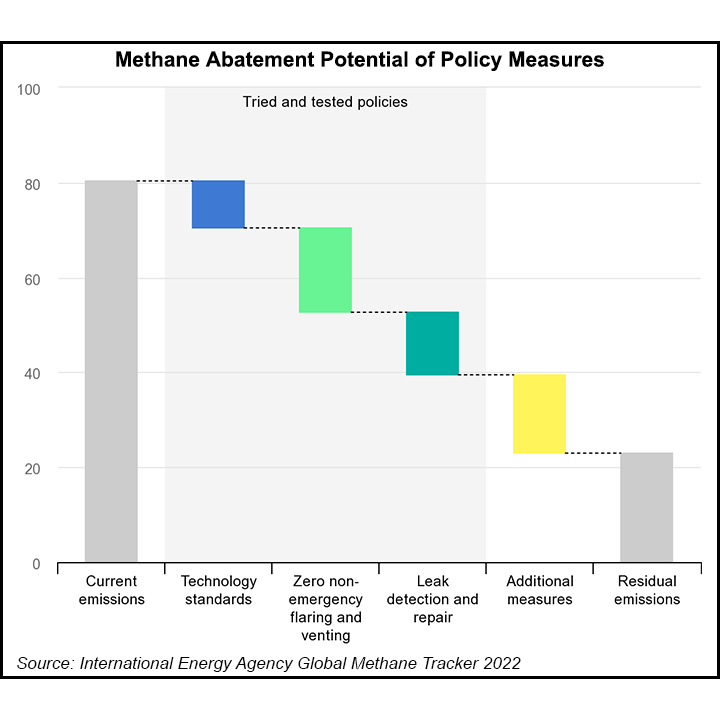 The rule drafted by DOI’s Bureau of Land Management (BLM) would require operators to strengthen methane mitigation efforts and would impose monthly limits on royalty-free flaring of natural gas.

Flaring converts methane, the principal component of natural gas, to carbon dioxide (CO2). However, incomplete combustion can cause leakage of methane – a more potent greenhouse gas than CO2 – into the atmosphere.

“The Biden-Harris administration has taken unprecedented action to tackle methane emissions and support a clean energy economy – this proposed rule will bring our regulations in line with technological advances that industry has made in the decades since the BLM’s rules were first put in place, while providing a fair return to taxpayers,” said DOI Secretary Deb Haaland.

DOI said that between 2010 and 2020, total venting and flaring reported by federal and American Indian onshore lessees averaged about 44.2 Bcf/year, or enough to serve roughly 675,000 homes. This is up from the 11 Bcf/year vented and flared between 1990 and 2000, well before advancements in horizontal drilling and hydraulic fracturing unlocked immense onshore oil and gas resources in the Lower 48.

“No one likes to waste natural resources from our public lands,” said BLM Director Tracy Stone-Manning. “This draft rule is a common-sense, environmentally responsible solution as we address the damage that wasted natural gas causes. It puts the American taxpayer first and ensures producers pay appropriate royalties.”

The proposed BLM rule follows a similar draft rulemaking by the Environmental Protection Agency, and a fee on leaked methane mandated by the Inflation Reduction Act of 2022.

The BLM proposal would require technology upgrades such as the use of “low-bleed” pneumatic equipment and vapor recovery for storage tanks.

Operators also would be required to develop leak detection and repair programs, and waste minimization plans for their operations on federal and Indian leases.

DOI said the proposed rule would “protect communities while delivering significant economic benefits through increased recovery of wasted gas. It would modernize requirements that are outdated and ill-suited for current technology and operations, including by requiring operators of federal and Indian oil and gas leases to take reasonable steps to avoid the waste of natural gas.”

Officials added, “If implemented, the proposed rule would also ensure that, when federal or Indian gas is wasted through excessive venting or flaring, the public and Indian mineral owners are compensated through royalty payments.”

“API supports waste prevention regulations that are consistent with Interior’s authority to require the economic capture of greenhouse gasses,” API’s Cole Ramsey, vice president of upstream policy, told NGI in an emailed statement. “Our industry is taking action to reduce emissions from our operations, and as a result, methane emissions relative to production fell 60% from 2011 to 2020.”

Ramsey added, “Industry-led initiatives like The Environmental Partnership are helping to continue that progress with the goal of further reducing methane emissions in every major U.S. basin. We look forward to reviewing the proposed regulation in its entirety and will work with BLM in support of a final rule that is cost-effective and furthers the progress we continue to make on reducing emissions.”

However, BLM “has proposed what is primarily a royalty-based approach to discourage wasted gas, though many oil and gas companies operating on federal and Tribal lands have simply accepted royalty payments as part of the cost of doing business,” according to EDF. “The bureau could draw on waste prevention protections similar to those in state rules in New Mexico and Colorado to strengthen its primarily royalty-based approach, further reduce wasteful venting and flaring, and better protect communities.”

The proposed rule is to be published in the Federal Register over the coming days, after which a 60-day public comment period would follow.

Related topics: bureau of land management Department of the Interior