Pressure pumping expert ProPetro Holding Corp. deployed 25.1 fleets in the Lower 48 during the third quarter, but utilization in the final three months is likely to decline to 18-20 because of “customer budget exhaustion, seasonality and overall softening industry demand,” CEO Dale Redman said Thursday. 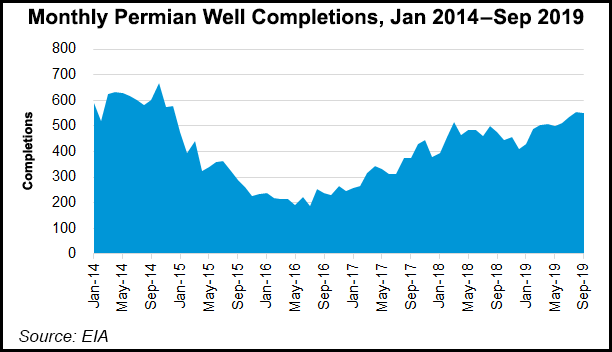 Redman shared details about third quarter results and early projections for 2020 activity during a conference call with his management team. The Midland, TX-based oilfield services operator’s business for exploration and production (E&P) customers is hydraulic fracturing (fracking) and completion services.

The Permian Basin, where ProPetro activity is concentrated, has seen challenges in the last half of this year, Redman said, “as we adjust and adapt to the swing in activity and a change in approach by our customers. The drawdown in activity has pushed us to focus on our own profitability and cost structure to maintain acceptable returns and utilization.”

However, as the E&P customers remain disciplined with capital spending, “we currently expect to see a small increase in activity going into 2020,” but whether that comes with an increase in profitability is unclear as the company negotiates with customers on services and pricing.

The changing dynamics have upended the “playing field,” said the CEO. “We are constantly looking for better ways to measure and position our company. Over the past couple of years, we have also seen a hard shift in the Permian Basin to pad development, longer laterals and larger volumes.”

From an operational standpoint, Redman told analysts, ProPetro has discovered that reinvesting in the fleet “to keep it young and high performing is a requirement to provide customers with quality service and to allow the company to make a return while doing so.

Management also plans to continue to work in innovation to “address the evolving requirements” in the massive oil and gas play that straddles West Texas and southeastern New Mexico.

ProPetro was an early adopter of electric fracking, aka e-fracking, in the Permian, aka e-fracking, and more pumps are set to be deployed, Redman said. E-fracking in general uses electric turbines powered by natural gas that otherwise would be flared. ProPetro uses DuraStim pumps with 6,000 hydraulic hp, which are designed to offer the equivalent of three times the effective horsepower of a conventional frack unit at around 10% of the cyclic rate.

ProPetro expects to deploy one Durastim fleet near the end of this year or early in 2020 in the Permian Delaware sub-basin, Redman said. Two additional e-frack fleets are scheduled to be deployed in 2020 for two existing customers with dedicated agreements.

ProPetro had spent $120.8 million on its DuraStim growth initiatives through the third quarter. It expects to spend an additional $58.3 million through 2020 on three DuraStim fleets, including a third turbine that it has not yet agreed to purchase.

“We continue to work alongside our equipment partners to ensure that our movement not only into electrically driven equipment but also that our adoption of an innovative new pump technology, is giving the appropriate opportunity to succeed once it is delivered,” the CEO said. “To do this, we have been pushing the limits of the new equipment as much as possible while it is still in our manufacturers’ facilities to avoid as much as possible having to optimize these fleets on the well side at the expense of our customers.”

ProPetro has “multiple parties involved from the generation of electricity all the way to the new long-stroke automated DuraStim pumps, and we will continue to tweak and fine-tune the entire package until we believe it is ready to perform at the well side.”

Management remains “very excited about the DuraStim opportunity to drive down well costs for our customers, while at the same time reducing our footprint and increasing our own operational efficiencies.”

ProPetro also expanded its cementing operations during 3Q2019 by deploying an additional newbuild, which brings total cementing capacity to 23 units.

In other news, management continues to cooperate in an ongoing probe by the U.S. Securities and Exchange Commission (SEC). ProPetro upended its management team in October following an internal review by the board’s audit committee. To date, management said has not identified items that would require it to restate previously reported quarterly statements.

In its new SEC Form 8-K filing, management noted that since Oct. 9, the audit committee “has identified one related-party transaction that was not previously disclosed.” The company and some of its officers and directors also have been named in a shareholder class action lawsuit filed in September.