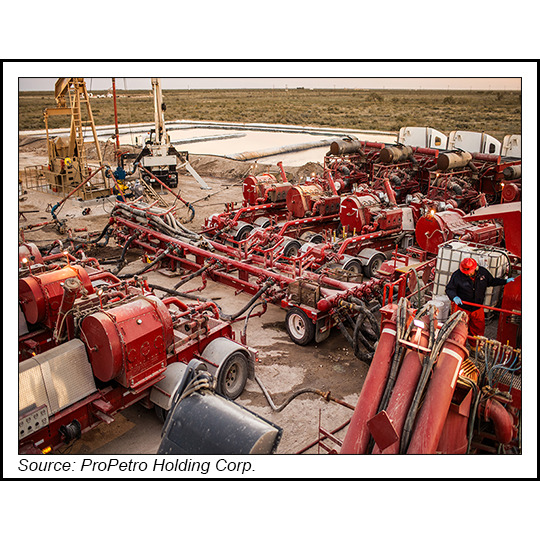 The contracted equipment provided to the undisclosed operator would be deployed primarily to support simulated fracture operations. Initially, the operator would use ProPetro’s Tier IV dynamic natural gas blending dual-fuel equipment. The transition to the e-fleet in the Permian is set to be completed in early 2023.

“With this agreement, we have entered the next phase of our fleet transition, and we are excited to help our customers substantially lower their completion costs and emissions,” CEO Sam Sledge said.

“By transitioning our fleet to more electric-powered equipment while doing so through a capital-light and unique lease agreement with our equipment manufacturer, we are setting ProPetro on a path for enhanced competitiveness, lower operating costs and therefore a more sustainable and durable earnings and cash flow profile, for the benefit of our stakeholders and shareholders alike.”

Sledge said the Permian agreement “marks a major turning point for ProPetro and is another accomplishment in our defined long-term strategy to industrialize our business.”

The company also has executed orders for two additional e-fleets, which should be delivered before the end of 2023. The additional order would give ProPetro four e-fleets as it transitions to the next-generation equipment.

“As we have previously outlined, we are excited to equip our team with leading edge technologies for the job of the future,” Sledge said. “That said, we will continue to do so in a disciplined manner as we begin to pivot investment away from conventional diesel equipment and toward a more relevant natural gas burning offering.

“We will do this while remaining dedicated to a disciplined deployment of assets into the market where new electric fleets are likely to replace legacy diesel burning fleets.”

In the transaction, with an implied value of $150 million, ProPetro traded 10.1 million shares of common stock and paid $30 million in cash. It also agreed to pay off about $7 million of Silvertip’s assumed debt.

Sledge last month said, “Going forward, we expect the crude oil market to remain structurally undersupplied for the foreseeable future, assuming production growth investments continue to lag, which we believe to be the case.

“In light of the limited visibility due to the overhang of a potential global recession, we are anticipating steady-to-flat activity through the end of this fiscal year and into the first quarter of 2023.”

The CEO said as the company looks ahead to 2023, “while at a slower pace, pricing momentum in the top half of the market continues to be strong. The sense of urgency among our customers and ProPetro’s addressable market remains intense, and we are optimistic that opportunities will continue to surface to expand margins.”