A surge in heating demand propelled U.S. propane prices during the 2020-21 winter season, according to a new federal report. 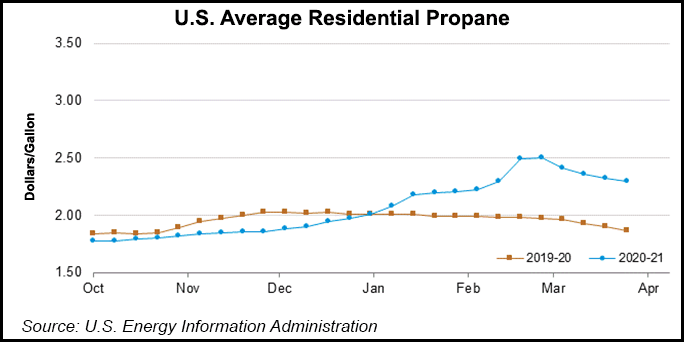 Residential propane prices in the United States averaged about $2.30/gal at the close of March, up 43 cents from a year earlier, according to the U.S. Energy Information Administration (EIA).

About two-thirds of the natural gas byproduct is consumed during the winter months. Propane is the primary heating fuel in an estimated 5% of U.S. homes and is most prevalent in the Northeast and Midwest, according to the agency.

The price surge was the most substantial since the 2013-2014 season, when markets tightened and propane demand jumped amid a polar vortex that swept across much of the Lower 48.

A similar weather system permeated large swaths of the country in the recently completed season, bringing frigid temperatures and snow as far south as Houston. While the storm interrupted production and drove a surge in Texas natural gas prices, it also galvanized propane consumption in the Northeast and Midwest, EIA said.

That blast of February cold propelled propane prices to a peak of $2.50/gal in mid-February.

A harsh winter across much of Asia also drove above-average demand for U.S. exports over the course of the winter, EIA said, providing another lift for propane prices.

U.S. propane inventory levels totaled 39.2 million bbl as of March 26, 34% less than a year earlier, according to the most recent EIA data. Supplies in the Northeast were down 12% and inventories in the Midwest were down 14%.