As the oil market rout continues, a clearer picture is emerging of its impacts on global natural gas trade, with analysts predicting both downside and upside consequences for various regions across the world. 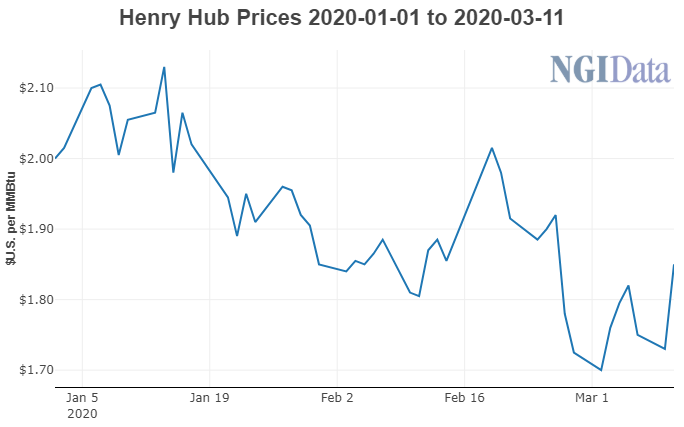 The impacts could run the gamut, said Wood Mackenzie Research Director Giles Farrer, who noted that everything from Henry Hub prices, to final investment decisions (FID) on liquefied natural gas (LNG) projects with exposure to oil prices and Asian gas demand could be effected.

Global oil prices have plunged below $40 as the Organization of the Petroleum Exporting Countries and its allies (OPEC+) face off against Russia in a price war that promises to deliver even more crude supplies at a time when demand is forecast to decline due to the coronavirus outbreak.

Oil-indexed LNG contracts are typically sold based on an average crude price over the previous three to six months. Given the lag, oil-indexed gas still looks uncompetitive against the price of gas at European hubs or in the LNG spot market.

Most of the world’s LNG is still purchased under long-term oil-linked contracts that have fetched big premiums to historically low spot market prices, sidelining some of the world’s biggest importers from the LNG buying spree. The oil rout, however, could provide relief for offtakers, while producers could be evaluating whether new capacity is viable at lower oil-linked prices later in the year.

“The greater risk to supply is pre-FID investments,” Farrer said. “Record LNG supply investments last year and plunging LNG spot prices this year were already testing the appetite of LNG project developers to sanction new LNG projects in 2020. But the drop in oil price will make these decisions more complicated.”

He added that fewer LNG projects across the world are likely to take FID this year and next, with facilities in Mozambique, Mauritania, Senegal and Australia likely to face pressure. That could lower global supply in the coming years.

In Asia, meanwhile, where long-term contracts are largely tied to the average price of a cocktail of Japanese crude oil imports, oil’s fall could stoke more demand for gas. Sustained lower oil prices could lower the price of gas for consumers in the region, Wood Mackenzie said, making the fuel more competitive with coal in places like Japan and South Korea that would encourage coal-to-gas switching.

In other markets, however, gas demand could face pressure from oil, particularly in India where lower oil prices could slow the shift from oil to gas in the industrial sector, according to Wood Mackenzie.

European gas demand isn’t likely to be impacted by the slide in oil, but some Russian and Algerian pipeline contracts indexed to oil and priced on previous six- to nine-month crude averages could prove more appealing.

“Assuming lower oil-indexed prices later in the year, buyers with nomination flexibility in their contracts will likely minimize their imports under these contracts now in favor of higher import nominations later in 2020,” said Energy Aspects analyst James Waddell.