This article is part of NGI's Bidweek Survey. Click here to request a free trial keyboard_arrow_right

After natural gas futures prices in April plunged to their lowest level since 2016, and with a bearish weather outlook that is seen tightening storage deficits over the coming weeks, May bidweek prices fell in dramatic fashion. 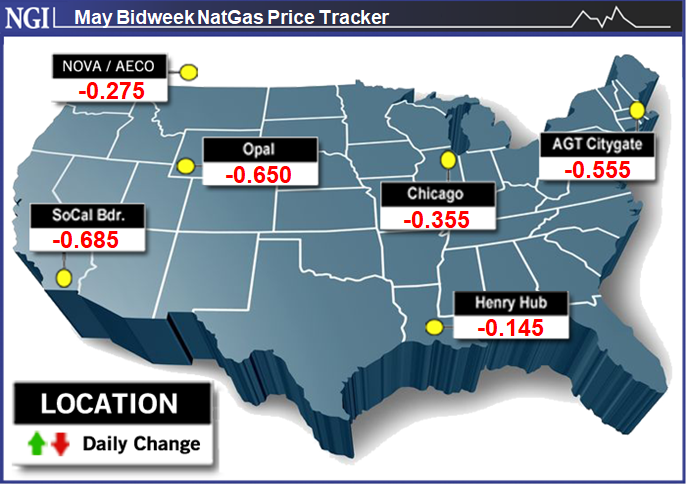 Substantial losses on the West and East coasts bookended more moderate declines in the country’s midsection, where Waha managed to remain in positive territory after posting one of only a handful of increases month/month. The NGI Bidweek National Avg. plunged 35 cents from April bidweek to $2.065, 34.5 cents below the May 2018 bidweek average of $2.410.

The writing has been on the wall for May bidweek prices as, despite some minor day-to-day changes in weather data, the overall forecast remained fairly mild for the next few weeks. The May Nymex gas futures contract rolled off the board at $2.566.

The latest weather models didn’t change the general theme, still showing the highest demand levels coming over the next few days thanks to a decent wave of heat for this time of year in the southern states, according to Bespoke Weather Services.

Demand was expected to tail off closer to normal levels for the remainder of the forecast, with next week still seeing slightly above normal cooling degree days (CDD) in the South, but below normal heating degree days (HDD) in the north. The pattern toward the middle of the month is less clear, as model differences grow, the firm said.

“The American data shows more ridging over the eastern United States, which is supportive of elevated CDDs, while the European Ensemble does not and would keep cooling demand lower,” Bespoke chief meteorologist Jacob Meisel said. “The Madden-Julian Oscillation signal would suggest a lean more toward what the European model is showing, which is our preference, though for most of the last several weeks, models have tended to be biased too cool overall.”

Regardless, the coming span of generally mild weather is expected to significantly improve storage deficits ahead of more sustained heat this summer. Inventories as of April 19 stood at 1,339 Bcf, a 55 Bcf surplus over year-ago levels but still 369 Bcf below the five-year average, according to the Energy Information Administration (EIA).

Energy Aspects said its weekly balances were showing triple-digit injections for each week out to the week ending June 7, starting from Thursday’s report. “That is a significant departure versus last year, when the EIA reported a single triple-digit injection in the post-winter shoulder season.”

Estimates for Thursday’s storage injection ranged from 95 Bcf to 126 Bcf, according to a Bloomberg survey. NGI projected a 105 Bcf injection. This would compare with last year’s 50 Bcf build and the five-year average build of 70 Bcf, according to EIA.

The first in a projected string of triple-digit injections comes as power demand in the major independent system operator territories was tracking 10 GW lower year/year in April, on the back of a much milder start to the month and a lack of cooling load expected at the end of last month.

“After lower-than-expected wind power generation growth most of the winter, the gains in installed wind capacity have finally turned into more renewable generation in April, further reducing the need for gas-fired power,” Energy Aspects said.

The firm expects power burn to pick up into May once CDDs begin to accumulate, and with gas prices falling at least 15 cents lower year/year, it should provide 0.75 Bcf/d more switching from coal to gas versus its previous outlook.

Nevertheless, the period through Memorial Day is likely to see the weakest total demand for natural gas for the year, according to EBW Analytics. In a severely oversupplied market, even at current price levels, at least five or six 100 Bcf-plus storage injections are likely, “making it difficult for the June contract to post significant gains.

As summer grows nearer, however, the downside potential is also likely to be limited, providing at least some support for the June contract,” EBW CEO Andy Weissman said.

Energy Aspects also observed some market signals that indicated support at current prices, although the firm emphasized that weather remained the wild card.

Meanwhile, production has been on the rise, though it has not yet managed to eclipse the weekly record high for the Lower 48. Furthermore, liquefied natural gas (LNG) exports have ramped back up following prolonged maintenance at Cheniere Energy Inc.’s Sabine Pass facility, although some work at an upstream compressor station have reduced flows into Cheniere’s Corpus Christi terminal. Also, Sempra Energy’s Cameron LNG project has seen feedgas volumes drop to zero in recent days, which is typical during the commissioning stage.

Despite ongoing pipeline maintenance that continued to restrict gas flows from the Permian, regional bidweek prices ended in the black. Waha averaged 9 cents after climbing 15 cents month/month, while El Paso Permian averaged 11.5 cents despite slipping by more than 20 cents.

Despite the overall position in positive territory, some trades continued to fall below zero as pipeline maintenance cut flows out of the region. On Wednesday, El Paso Natural Gas (EPNG) said it had tightened the capacity restriction resulting from an ongoing force majeure, cutting about 50 MMcf/d relative to the highest flow volume in April.

EPNG’s Caprock force majeure has been in effect since late December, when a compression unit at the Caprock Station failed. This occurred only a few weeks after EPNG’s Permian North expansion went into service in early December, initially leading to a notable increase through the “LINCOLN N” meter in central New Mexico, according to Genscape Inc.

Since then, an additional five compression units have gone down at various times: the other unit at the Caprock Station as well as units at the Belen and Roswell stations. All have been grouped under this same force majeure and have resulted in decreased flow capacity for the “LINCOLN N” meter, Genscape said.

In its latest update, EPNG announced the failure of equipment associated with Roswell’s Unit No. 2 and Belen’s Unit No. 2. “This decreases throughput capacity by an additional 56 MMcf/d with end date still to be determined both for this reduction and for the force majeure as a whole,” Genscape natural gas analyst Joe Bernardi said.

The weak pricing has already impacted operations at Apache Corp., which last month said it initiated gas production volume deferrals in late March from its Alpine High play in the Permian because of “extremely low prices at Waha hub.”

Although the deferred production was reported to be temporary, the next major relief valve for the Permian, where existing infrastructure is bursting at the seams, is not due until October. Although there have been reports that Kinder Morgan Inc. (KMI) would bring online is Gulf Coast Express earlier than expected, management stuck to its timeline during a call last month to discuss 1Q2019 earnings. Until Gulf Coast Express enters service, Mexico remains the only major potential outlet for stranded Waha gas, according to BTU Analytics. However, that’s where it gets complicated.

“Volumes remain far short of the more than 4 Bcf/d of pipeline capacity linking the Permian to Mexico,” BTU analyst Connor McLean said. The significant project delays further downstream that have limited West Texas exports are “crucial to easing the oversupply of natural gas in the Permian.”

The pending completion of Fermaca’s “Wahalajara” three-stage system would allow gas to travel from Waha to Guadalajara, the second largest city in Mexico with a population of 1.5 million. The three-stage system starts with the 1.6 Bcf/d El Encino-La Laguna pipeline, which has been in service since March 2018 but has yet to begin flowing.

In April, Fermaca announced the remaining two legs had been delayed to May from March, but an industry source told NGI that June was a more likely date for operations to start, echoing the projection given by Miguel Reyes, the director general of CFEnergÃ­a, which is the fuel marketing arm of Mexican state power utility ComisiÃ³n Federal de Electricidad. The repeated delays have dampened BTU’s expectations the project will enter service this summer.

Waha could also see relief from Carso Energy’s Samalayuca-Sasabe pipeline, a 0.5 Bcf/d pipeline that would run parallel to the U.S.-Mexico border. The pipeline could transport gas from Waha to Sasabe on the Arizona-Mexico border and compete with KMI’s Sierrita pipeline. The Sierrita pipeline received, on average, 0.15 Bcf/d from El Paso Pipeline over the last 12 months.

The project was initially scheduled for start up last December but it has since been delayed to August. Combined, the delays to the Samalayuca-Sasabe and the portions of the Wahalajara “have exacerbated the issues in the Permian by delaying nearly 1.5 Bcf/d of downstream connectivity for Waha gas,” McLean said.

Weak pricing in the Permian has persisted as downstream markets have provided little in the way of demand. Several West Coast markets saw May bidweek prices fall below $2, with Malin shedding 65 cents month/month to average $1.94. SoCal Citygate plunged nearly $1.60 to average $2.64, while PG&E Citygate remained above $3.

A slew of pipeline work in the Rockies had little impact on May bidweek prices, with $1 handles seen across the region. The steepest month/month decline was at Northwest Sumas, which tumbled 77 cents to $1.875.

The same was true in the Northeast, where 30-cent-plus drops were common despite several pipeline maintenance events restricting gas flows in the region. Algonquin Citygate May bidweek prices fell 55.5 cents to $2.375, and Transco Zone 6 NY dropped 37 cents to $2.21.

Algonquin Gas Transmission (AGT) is in the thick of its summerlong maintenance plans, and on Wednesday, the pipeline said capacity would be reduced for maintenance on Thursday (May 2) and Tuesday (May 7) through the Stony Point compressor station. The impact to flows should be minimal, according to Genscape.

AGT was set to conduct pig runs on its Mainline from its Lambertville, NJ, interconnect with Texas Eastern Transmission (Tetco) to upstream of the Stony Point, CT, compressor station. During these tool runs, capacity through Stony Point is to be reduced to 1.40 Bcf/d and 1.31 Bcf/d, respectively, from its current operating capacity of 1.66 Bcf/d.

Additionally, Millennium is planning an outage on its Hancock, NY, compressor station from Tuesday until May 15, and Iroquois Gas Transmission has an outage planned on its Boonville, NY, compressor from Monday (May 6) to May 19, “but neither should be impactful due to downstream demand falling with cooling temperatures,” according to Garcia.

May bidweek prices in the middle of the country also softened, although month/month losses fell short of those seen on either coast. Chicago Citygates in the Midwest fell 35.5 cents to $2.31, while Panhandle Eastern also slid 35.5 cents to $1.795.