“The biggest challenge for our customers is to get reliable, affordable and efficient financing for their projects,” Asger Victor Hansen, founder of Kauil Energy in Mexico City, told NGI’s Mexico GPI in the latest installment of its interview series. 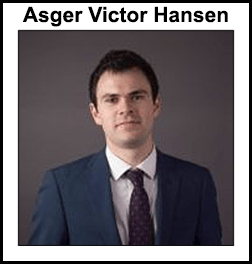 Hansen, who is a native of Denmark, founded Kauil Energy, a startup solar energy company, in 2020 in Mexico City. Kauil aims to commercialize solar panels for business and residential use, as well as design and deploy microgrids.

Hansen came to Mexico in 2015 where he worked at the Trade Council of Denmark in Latin America and closely with climate and energy groups. He has since worked at the Sierra Club in Washington D.C., as an operations manager for Grido Inc. in Mexico City and as a consultant at the environmental agency Regenergy.

He graduated with a master’s degree in environmental management from Duke University’s Nicholas School of the Environment in 2019, where he collaborated with a community in Puerto Rico to assist with microgrid electricity pricing following hurricane María. He received his undergraduate degree from Gettysburg College.

NGI: How can solar and natural gas complement one another in a diversified energy grid?

Hansen: The sun only shines in the day. Unless you have a battery bank at your house or business, which continues to be relatively expensive to implement at the moment, you need to depend on a fossil fuel such as natural gas at night to ensure a robust electricity supply for the Mexican grid.

NGI: In August, Mexico announced it will increase electricity prices for high consumption domestic users — known as DAC — that use more than 250kilowatts/hour per month. In your opinion, could this generate more interest in the creation of micro-grids or use of solar panels for domestic electricity generation?

Hansen: I think so, yes, since consumers can be sensitive to changes in their fixed stable  expenses, such as the energy bill. For users who already have a high natural gas and electricity bill, solar energy will become a more attractive and affordable alternative as prices on fossil fuels increase in the short and long term.

Interest in microgrids may increase as people construct in areas where the electricity grid is out of reach, like cabins, recently developed areas, small islands or small towns, or if consumers experience excess outages, especially if the cost of adapting a microgrid competes on the kWh.

NGI: There has been speculation that the recent price increase for U.S. natural gas – which is imported to Mexico – led to the decision to raise the DAC. Is this your interpretation as well?

Hansen: It is plausible that the U.S. increase in natural gas prices has increased the price of electricity for the end consumer in Mexico. However, there are other factors that could affect the electricity price for DAC users such as adverse weather events, and grid maintenance, which may increase the cost of delivering the power to the end consumer. I am not sure which factor exactly led to this particular increase in prices for DAC consumers.

NGI: At a time when renewable energy development has slowed in Mexico, what have your biggest challenges been so far?

Hansen: The biggest challenge for our customers is to get reliable, affordable and efficient financing for their projects. There is a big disconnect between people’s desire for solar energy and the financing available to make their dreams come true. This is sadly the case for both business and residential. We need more affordable funding from conventional banks and more alternative funding sources like crowdfunding to accelerate the adaptation of solar energy in Mexico. While there are financing options available, we would like to see the interest rate come down, especially considering that solar panels are a relatively low-risk asset.

NGI: How have the changes in Mexico energy regulation impacted the energy sector in the last few years?

Hansen: At the large scale, it is my impression that the development of renewables has slowed in Mexico (i) because it is difficult to obtain financing, (ii) because certain government regulations limit the size of solar farms, and (iii) because the grid may not have the required capacity to transmit vast amounts of renewable energy produced during the day in the north to where it is needed in the south. That forces energy developers to rethink how renewables can be installed in Mexico, and perhaps there are more opportunities at the local level at the moment, rather than big energy projects at the national level, like the big solar farms we see in Brazil.

NGI: What can the Mexico energy sector do to improve the investment climate in the industry?

Hansen: Make it easier for residential and business users to register their solar installation with Comisión Federal de Electricidad (CFE) through digitalization of the entire process. Government and private initiatives to provide financing for people who wish to install panels would also run up demand and orders in the solar market.

NGI: In your opinion, if the energy consumed by a domestic user was generated by solar panels, would prices be subject to less fluctuation as a result of external market factors?

Hansen: I think that is probable, but it still depends on the particular energy mix that is used to balance the grid and government regulations. Solar delivers stable power daily at a price that fluctuates little which provides financial stability for the owner of the solar panels, and while they use solar energy they are not affected by fluctuations in the price of other energy sources. That points to less fluctuation in energy prices for solar owners, while those who do not go solar will depend on the cost of transmission as well as the cost of other energy sources like natural gas and wind, and at the moment electricity prices appear to be going up. On the other hand, when a user goes solar, they spend less on their electric utility bill which in turn may increase the cost of electricity for non-solar users as the pool of customers who pay into the maintenance of the grid continues to shrink. My guess is that as more people go solar, CFE will be forced to increase the charges on transmission as this problem exacerbates. So for the people who go solar, prices will be subject to less fluctuation, whereas my guess is they will probably keep increasing for people who do not.